Wish Upon a Falling Star… 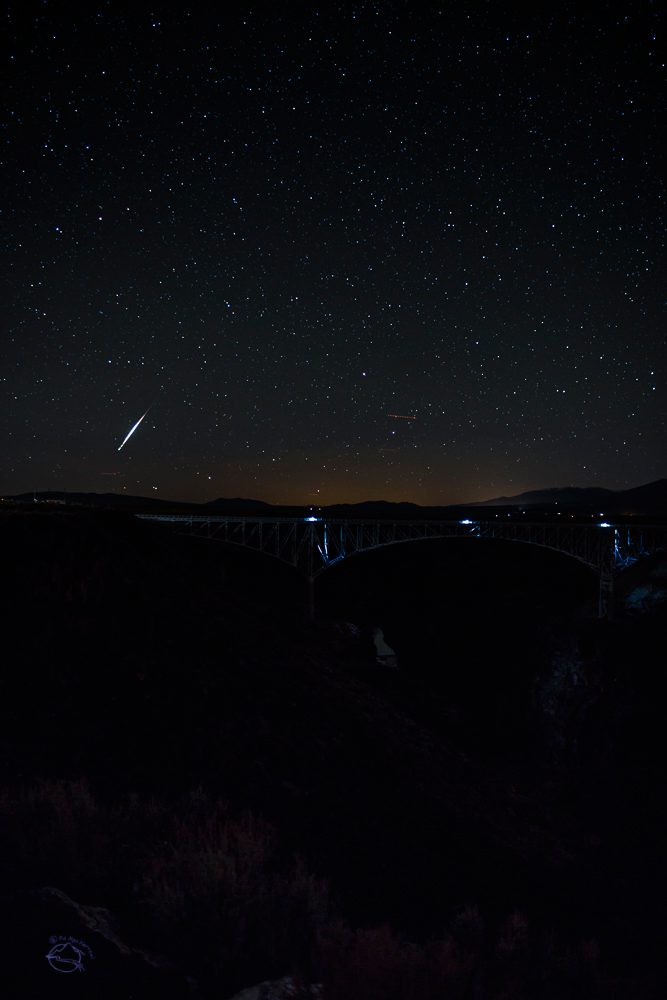 A large meteor lights up the Taos Gorge.

Some months ago I experienced a powerful and sad thing.  I was out on the rim of the Taos Gorge taking a panorama of the Milky Way over the Taos Gorge Bridge.  Other than a few people camping in the rest area by the bridge I was the only one around.  At least that was the case when I first arrived and parked my truck in the parking lot.  I hiked downstream a few hundred yards and setup my tripod on the edge of the precipice dropping 1000 feet down through the darkness to the Rio Grande.  I patiently  took many 15 second exposures, moving the field of view between images in order to capture the full Milky Way. Occasionally pausing while a car passed over the bridge.   There was not much traffic on Highway 64 that night.

While I stared up at the night sky, bundled up in my down coat, I could hear the faint roar of the river way below me.  Staring up at the night sky for long periods and then back to the camera and tripod for the occasional adjustment, while standing just a few feet from the edge of the deep gorge gave me a bit of vertigo.  A few deep breaths every now and then were needed to relax.  While the shutter was open I saw a large “fireball” light up the sky to the north.  Happily, I checked the LCD on the camera and saw that I had captured an image of the meteor.

The darkness was eventually broken.  A  caravan of emergency vehicles approached from Taos west towards the bridge.  As they got closer I began to realize that something terrible had probably happened.  The fire trucks and police cars stopped in the middle of the bridge and shined search lights down into the darkness below the bridge.  “Oh my God!” I thought to myself.  Someone had probably jumped from the bridge while I was photographing the night sky!

Sadly, this bridge is a place where many people decide to end their lives.  As I stood next to the cliff in the darkness, with the bridge lit up now by flashing red lights I felt a deep chill to the bone.  In the distance I could see a police car drive over to my truck.  I then saw someone shining a flashlight in my truck.  I decided to call the non-emergency phone number for the Taos police department and let them know that I was off in the distance photographing the night sky.  The emergency vehicles eventually drove off and I packed up my photography gear and hiked through the sage back to my truck.  When I arrived at my truck there was an empty car parked next to my truck.  I am not sure, however, I think it may have been the car of the person who jumped.

The drive home was quiet.  I wondered a lot about what happened.

I wondered if the person saw the meteor before they jumped?  They must have, since it lit up the sky.

I have kept this experience quiet for sometime.  The date and any more details I will never reveal out of respect to all the loved ones who have lost someone to the bridge.  Although I am not a proponent of people taking their lives, I can understand that for some it may seem like their only option at the time.  More and more people are resorting to suicide in the USA these days.  Despair, depression, and isolation are contributing factors.  Suicide hotline phones were installed on the bridge.  At one time there was talk about putting a net below the bridge to thwart jumpers — although they could easily find other places to achieve the same thing.

I wish that whoever decided to quit their life that night would have arrived earlier and ran into me as I set out to my photography location.  Perhaps I could have talked with them?  I want to believe that if they had been able to talk to someone else about their problems they might change their mind.  That is probably wishful thinking on my part though.  Sadly, some people become so distraught that they see this as their only choice.  In the end it is their choice.

When I saw the meteor that night I made a wish.  I hope that whoever decided to jump that night also made a wish on that falling star, and that it came true.