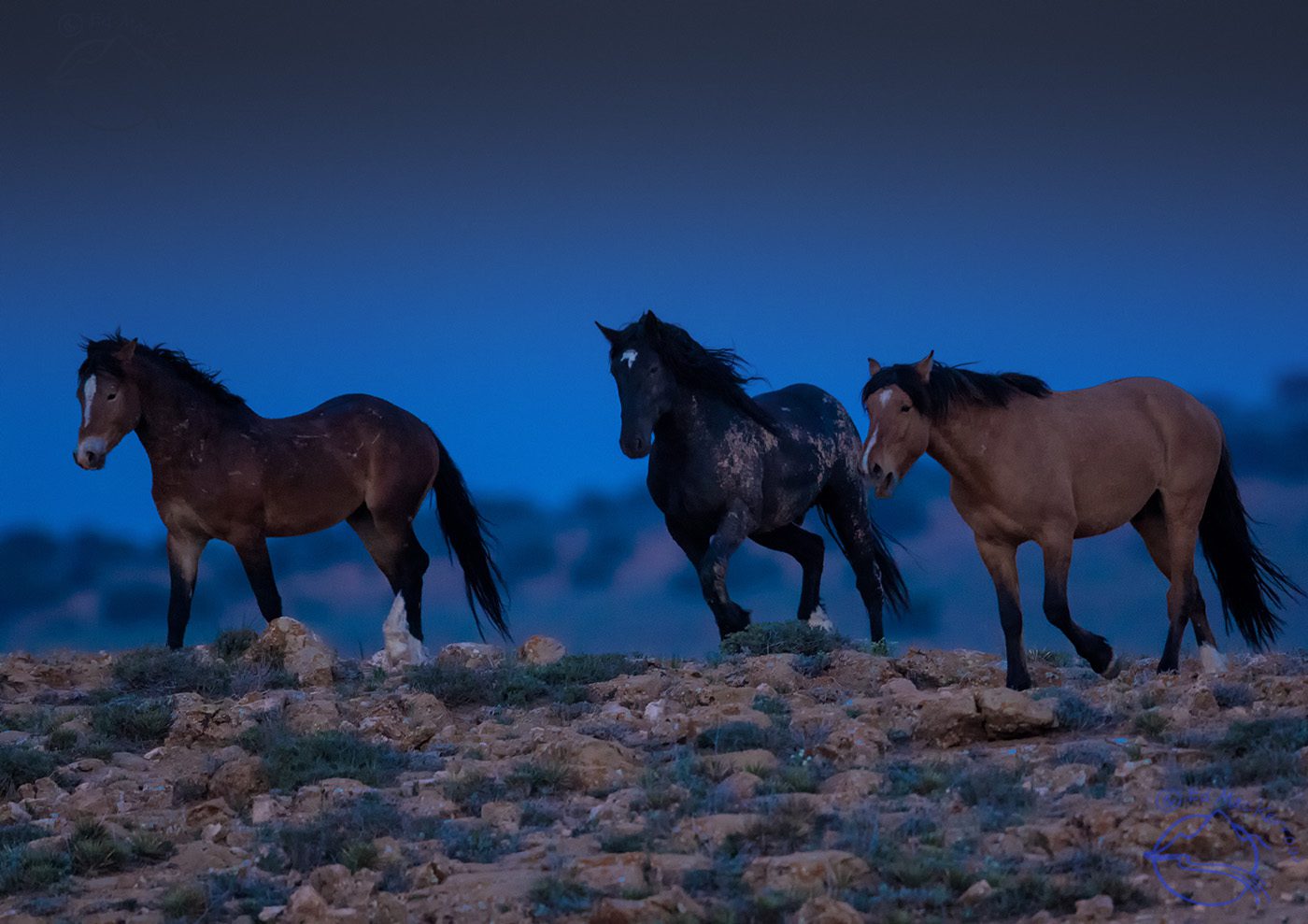 Wild Mustangs come thundering over a rise as night falls.

Deep in the Utah badlands runs a large herd of wild mustangs.  For two weeks I camped out in their desert home to learn about them and photograph their behavior.  That trip left a strong and deep imprint on me.  I had no idea about the team work between the different tribes of  wild mustangs.  Behaviors and intellect that have left me in awe of these wild riders of the sage.

It took me a couple of days to find the herd.  Far away through my binoculars I could see five different bands of horses.  Each band was led by a stallion.  A strong and sturdy palomino stallion oversaw all the horses.  He would keep a close eye on the other stallions.  Each night the different bands would come together just before dark.  The palomino “President” would run circles around the perimeter of the overall herd, checking to see if they were all there.  The other stallions frequently fought each other, however none challenged “The President”.  All “The President” needed to do was gallop close to the fighters and they would behave. 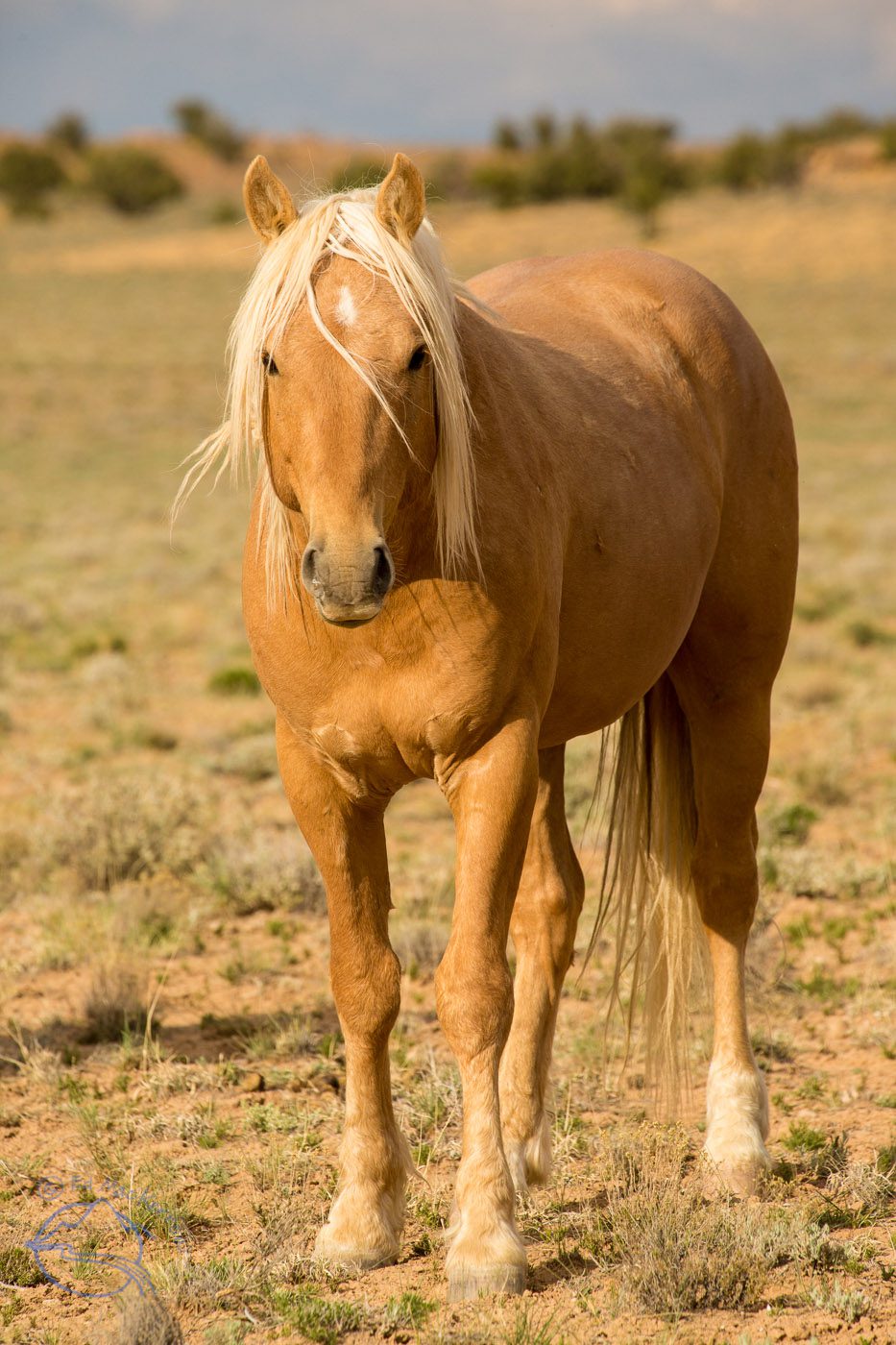 “The President”. Lead stallion for the overall herd of mustangs.

Each morning the smaller bands of horses would go their different ways, browsing on the grasses of the desert, and visiting a few shallow watering holes.  Knowing this I setup a photo-blind in the dark before sunrise close to one of the watering holes, hoping to get close enough for some photography to begin.  Freezing while sitting still and waiting for the sunrise I had high expectations of good wild mustang images.  The sunrise lit up the reds and oranges of the Utah desert rock in an amazing show.  Sure enough a band of mustangs slowly approached the watering hole — and then stopped.  The lead stallion approached a little closer towards my photo blind while the rest of the band stood at attention.  With a keen eye and then a quick whinny, the band galloped off.  They knew something was up, and I then knew this method was not going to work.  I kept watching them from distance with binoculars, and they kept their distance from me.  One night I was awoken in my tent by the sounds of hoofs close by.  Carefully looking out of my tent in the dark night I could see the outline of 3 horses slowly walking by my camp.

Patience is a virtue that is the wildlife photographers friend.  I knew that if I just waited long enough the horses would get used to me and might let me approach closer.  My long lens had the reach to get some photos, however the air turbulence above the desert floor made it impossible to get sharp images.  From my days doing research in optics I remembered that there are two short periods each day when the air temperature equals the ground temperature.  During these short ( 10-15 minute) windows the air turbulence is almost zero.  On those summer nights when you go for a walk after dinner and the air feels calm and comfortable you are probably experiencing this effect.  Armed with this knowledge I tried to position myself at the right times of morning and evening to focus on the horses with 840mm and 1200 mm lenses.  It worked so-so.  During the rest of the day I just watched the horses from afar, read a lot of books, and took an occasional solar shower.

Finally, after about four days, my luck improved. The entire herd, led by “The President” came over to visit me in my camp.  The horses surrounded my camp and stayed about 75 yards back from me.  I kept pretty calm and just talked quietly to them.  A few of them tilted their heads while I tried to explain my purpose of being there.  Not all the horses felt comfortable coming close to check me out, perhaps it was time for another solar shower?  This “meet and greet” was awesome though, not only for the experience, but also since now they knew I was just a photographer and not there to hurt them, the mustangs were much more relaxed around me.  I would still move very slowly and never pursue their movements though. 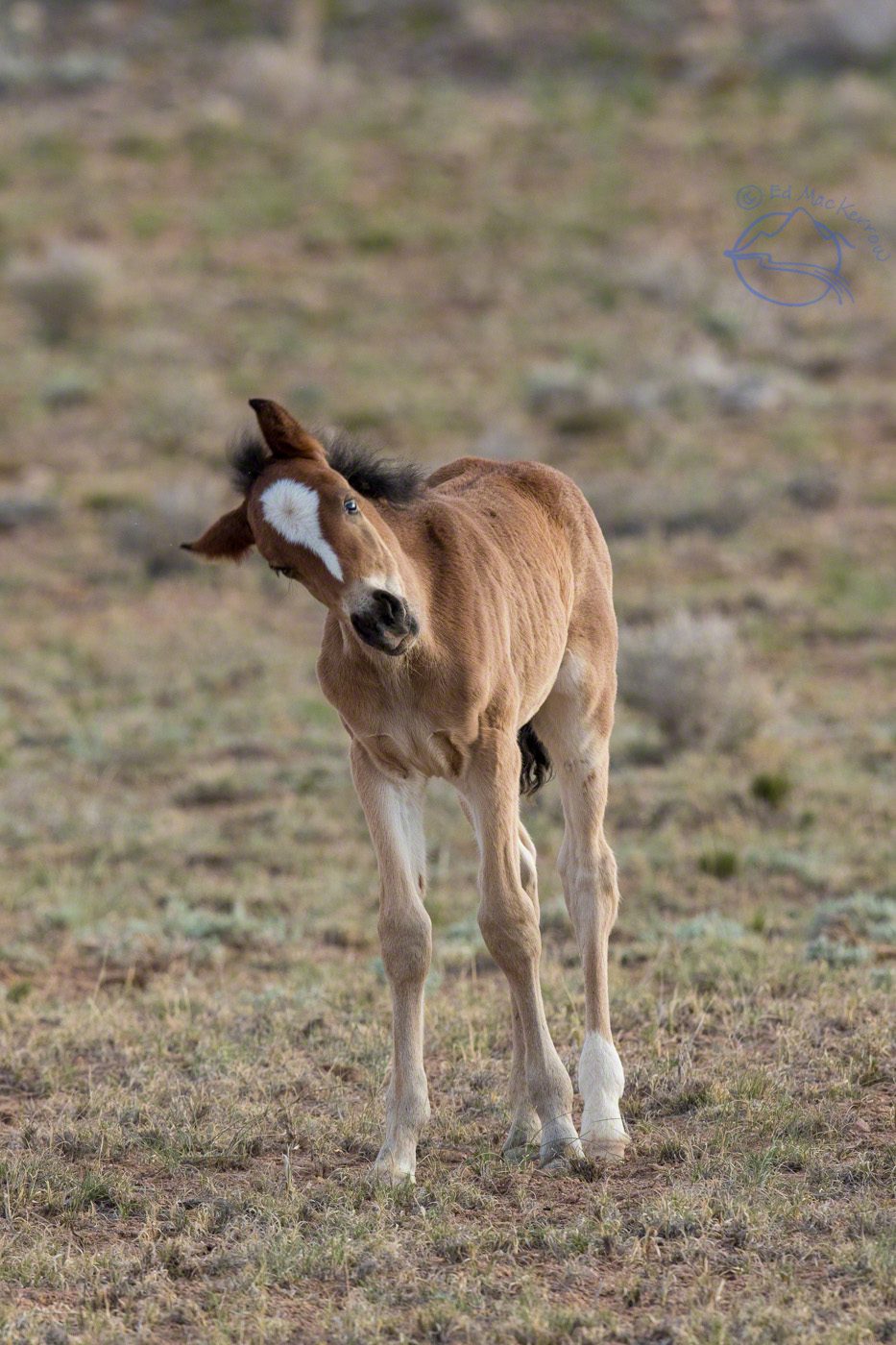 A curious and young colt tries to figure what I am.

For the next week I witnessed some amazing things with these horses.  Late one afternoon I was watching two young stallions, as they watched a trio of Pronghorn Antelope.  These antelope were always in the area and the horses seemed to ignore them — until now.  All of sudden the two young stallions chased down the antelope.  One of the stallions “bit” an antelope in the rear in what appeared to be a playful game of “tag”. 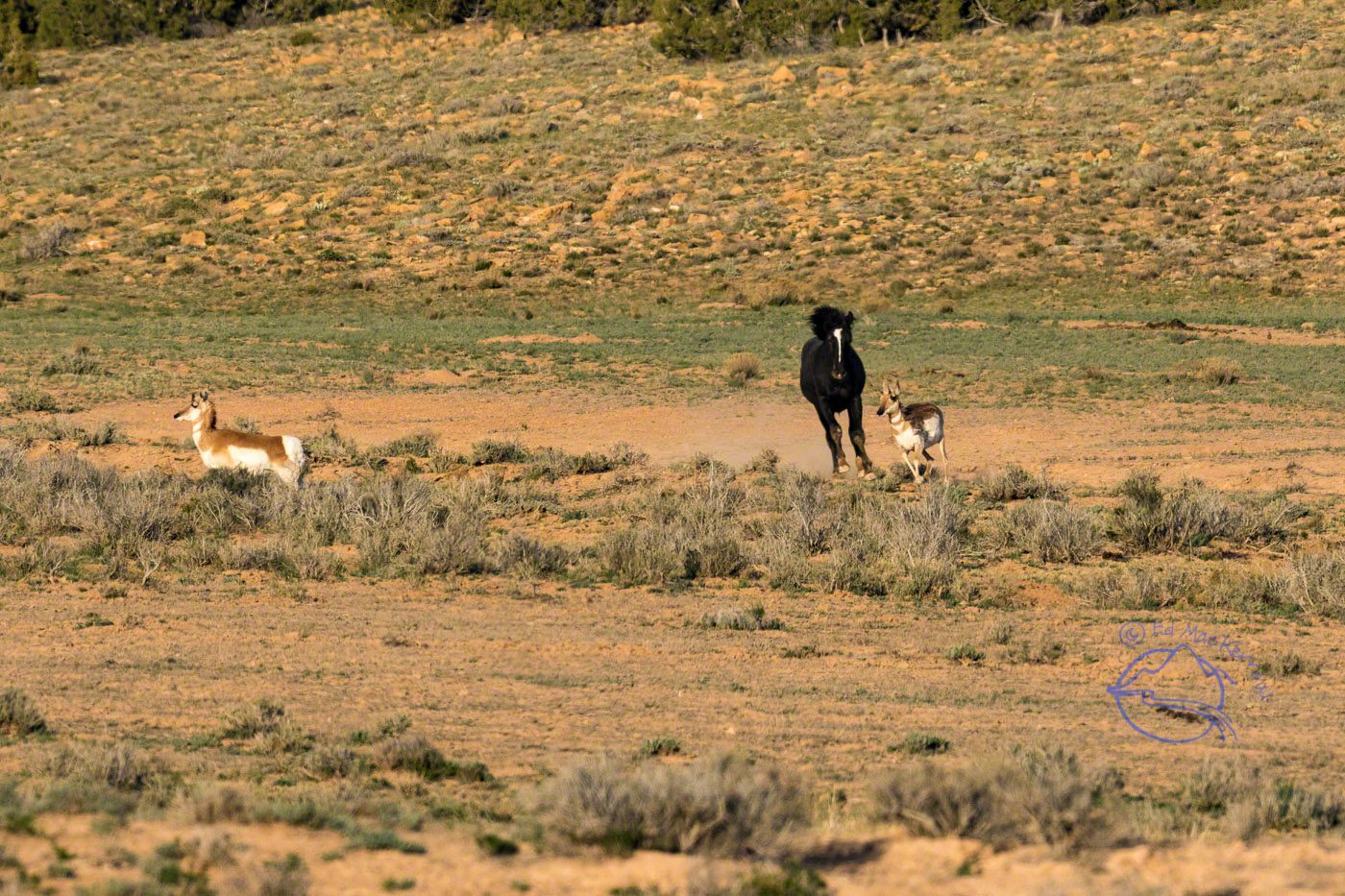 A mustang stallion plays a game of chase with an antelope.

Some of the scenes were sad though.  One afternoon I watched what appeared to be a funeral of a mare.  This mare was limping along slowly and her band / tribe waited for her.  She finally laid down.  The other horses gathered by her and took turns going over to her and nuzzling her.  This went on for a couple of hours.  As I watched through my lens at this unfold I was deeply moved.  Tears ran down my eyes as I watched.  Wow.   The mare laid their quietly for a long time.  I remember actually crossing my fingers and hoping that she would heal and be ok.  As the sun sank on the horizon the band of horses remained with her.  Suddenly she got up!  I was so relieved and happy.  Her band of horses galloped around in circles around her. They escorted her as they wandered back to the basin where the main herd spent the night.  She still a slight limp, nothing like she had earlier though.  I guess she just needed a rest, and some healing love. 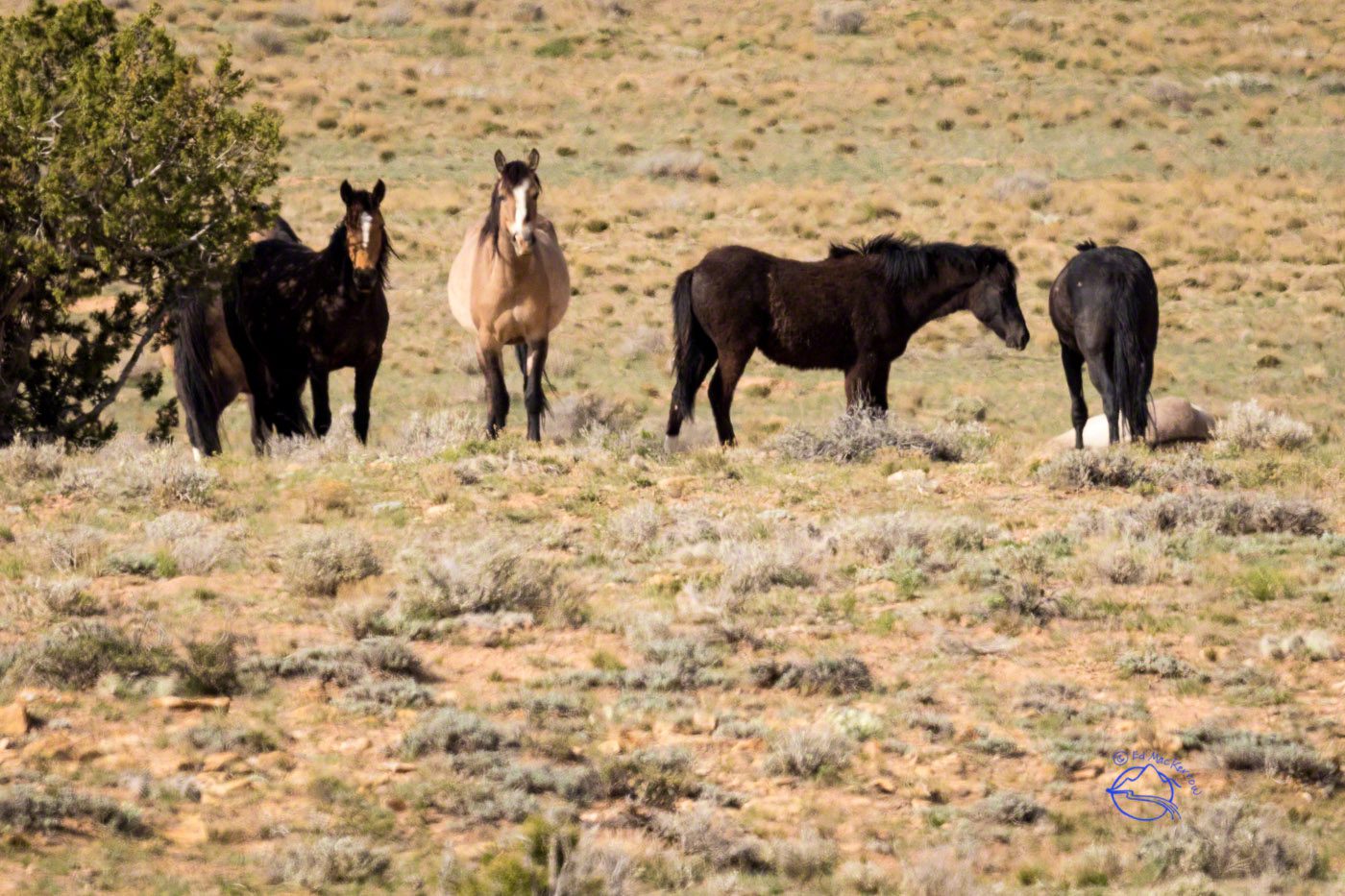 The injured mare lays down on the right side of the image while members of her band watch over her.

Now the herd seemed to accept me.  Some mornings they would walk by my camp, politely though, always giving me a nod and some distance. Their watering holes were pretty small and I wondered how they would do in the hot summer months.  They seemed very robust though and their kingdom was a huge expanse criss-crossed with shaded canyons, small streams, and desert towers.  I was only seeing a small part of their life. 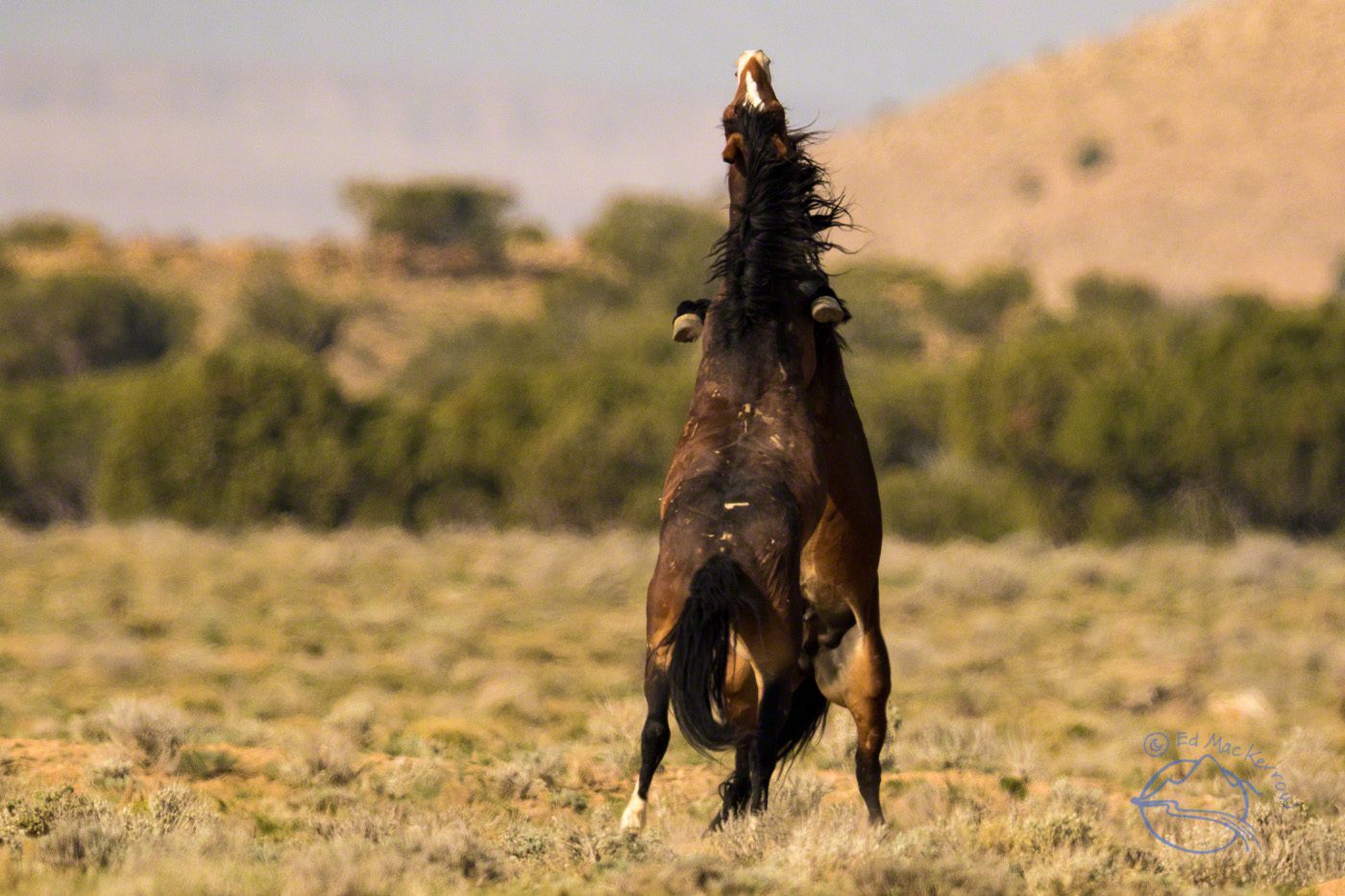 Two stallions spar for the ladies.

I look forward to going back and seeing these horses again.  By now the colts will be grown up.  Wild mustangs are special.  Something about them brings up deep emotions of freedom and the wilds for me.  Now as I look back through the thousands of images of the herd I reminded how lucky I was to experience them in their high desert home.