All alone in the backcountry of Katmai National Park my senses are refined.  Especially my hearing.  Far away from the hustle and bustle of Brooks Camp the background sounds I now hear are all sounds of nature.  Wind gently rustling the leaves on the birch trees, water rushing in the rivers and creeks, and melancholy songs of golden-crowned sparrows provide a relaxing ambient background noise. Any interruption to it catches my attention.

For the past few days I have been trying to find wolves to photograph.  A couple of weeks earlier I encountered solitary wolves on two separate occasions in this watershed.  Quietly I hike up the river listening carefully for splashing from bears fishing the river.  Normally I would be vocalizing loudly, “Hey Yogi!  Hey Boo-Boo!”, to announce my presence and avoid surprising any bears.  Instead I am now in stealth mode avoiding scaring off any wolves.

Tall green grass fills any void that birch and alder trees have left.  Here there are no hiking trails.  The only hint of a trail through the brushy forest are bear trails. 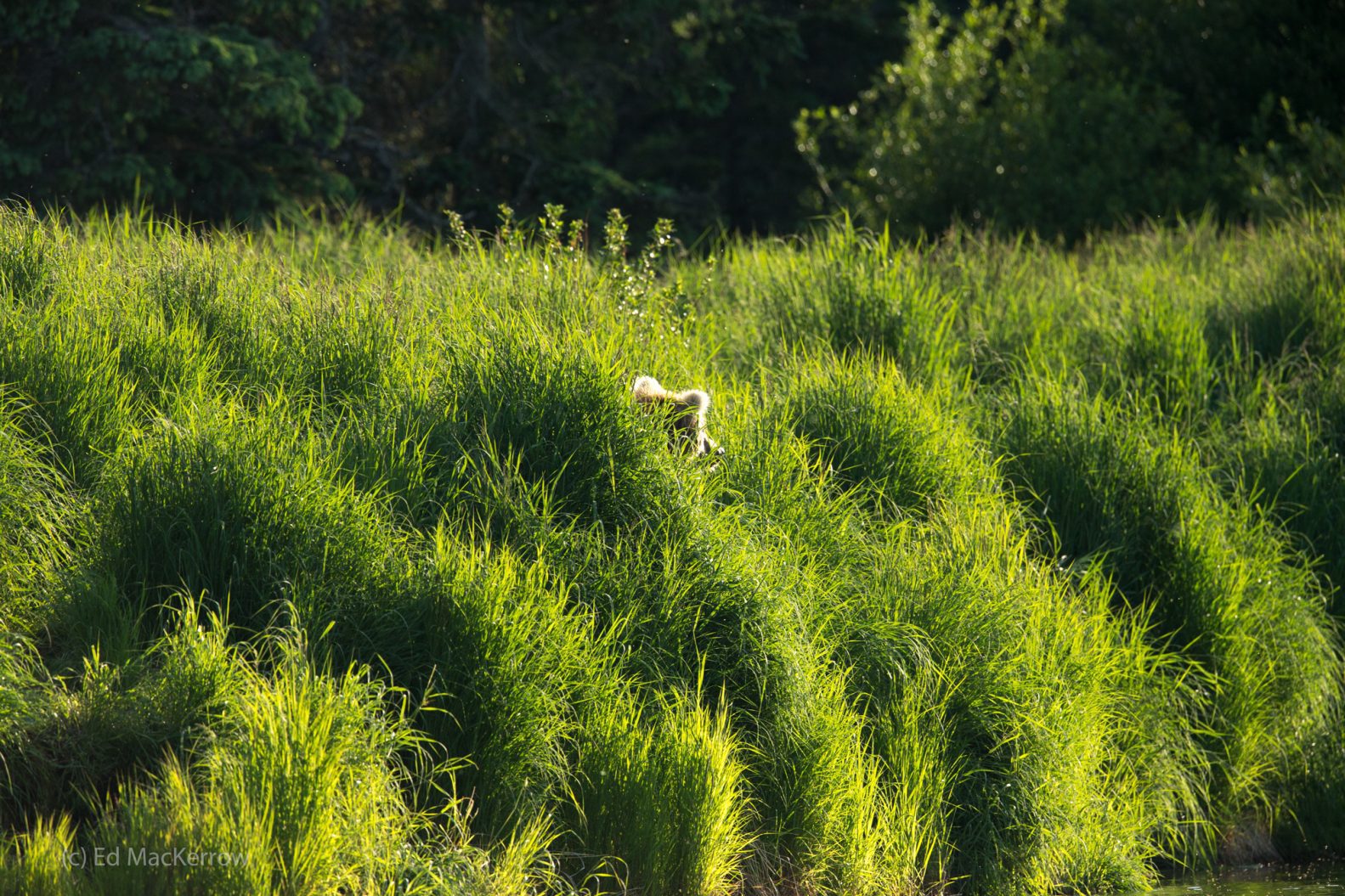 You never know what you will find in the tall grass!

I try to walk in the river bottom as much as possible and avoid walking in the thick forest and tall grass.  Bushwhacking is tiresome and noisy.  It is also easier to accidentally come across bears in the tall grass, surprising and scaring them into a defensive attack.

Moving through chest tall grass along a river a few years ago I accidentally came within a few inches of stepping on a sleeping brown bear cub.  My calls of “Hey Bear” were not loud enough above the river noise to catch the attention of a sow with two cubs sleeping in the tall grass.   Just as I noticed the cub, Mom stood up and woofed loudly at me.  She was just a few feet away as I instinctually cowered in her shadow and turned my head down towards the ground.  As I slowly moved to the side, she lumbered off, stopping for one more intentional stare at me.  I was lucky, that time… 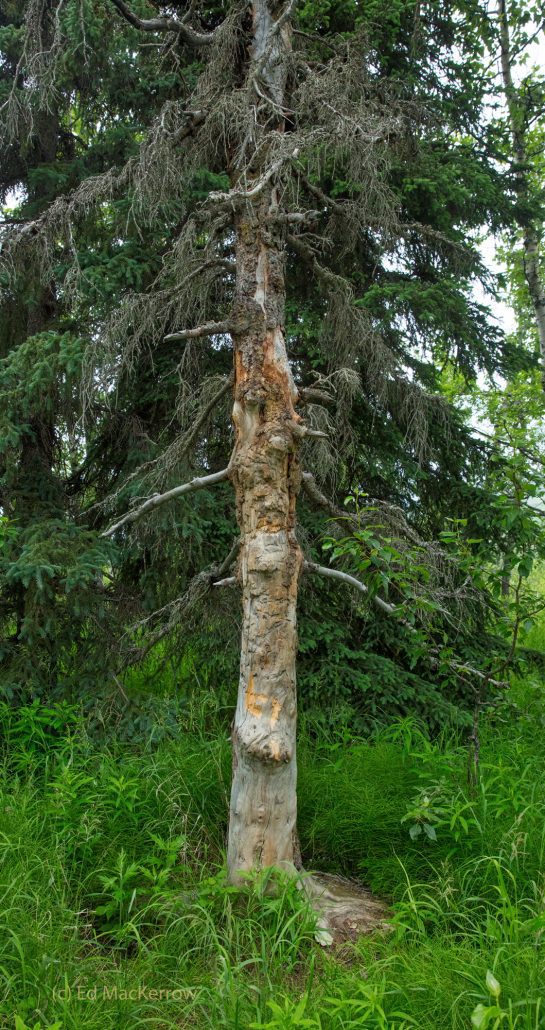 Example of a rub tree used by bears. 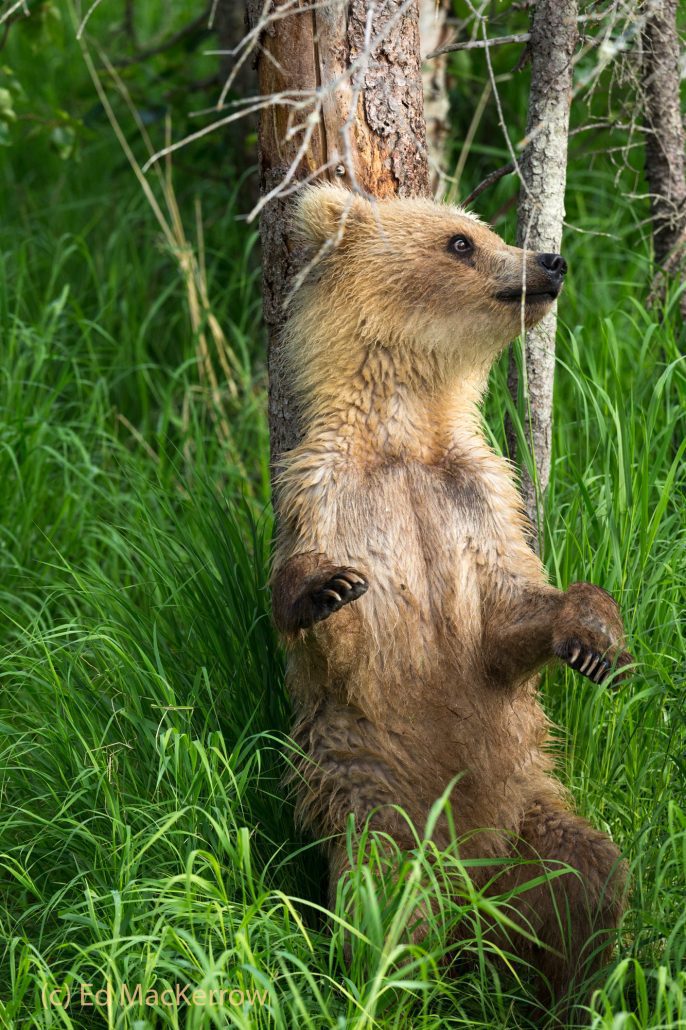 Quietly looking for wolves, versus making noise to alert any bears in the area was a tradeoff.  Perhaps not a smart one.  Choosing to lighten my backpack I left my electric bear fence back at Brooks Camp.

For a few nights I pitched my tent in an area where I later discovered fresh sign of a big bear.  New territorial scratches more than 10 feet up the side of a birch rub tree — a tree where bears rub and mark their territory.  Recent bear scat and trampled grass trails also let me know I was not alone.

Now I needed to remain quiet enough to not scare off any wolves and avoid chance encounters with this mystery bear.  My approach was to walk the creek beds and rivers and then choose a strategic place to sit and wait for wolves.

Sitting on the bank of the small creek the noise of the running water changed enough to catch my attention.  I turned upstream to see a wolf crossing the creek!  The tall and lanky wolf was only about 40 meters from me.  My slight movements alerted him.  He stopped in the water, stared at me with a look of curiosity and started to approach me.

I laid down in the rocks on the side of the creek to not scare him and also get a better camera angle.  The shutter on my camera was now smoking as I let it rip, taking more than 12 frames per second.  This was a golden moment for me.

My thoughts were fully focussed on photography and not on fear.  Rolling to my side I quickly checked my exposure histogram – perfect.  As the wolf got closer and closer I stopped down the aperture to get a longer depth of field.

Now the wolf was within 5 meters of me.  He stopped and stared at me.  I spoke quietly to him, “Hey beautiful… It’s OK, It’s OK”.  Avoiding staring directly in his eyes, I kept my eye on the view finder as I continued to photograph him.

He lowered his head and gently moved it side to side while quietly expressing some moans.  Much like I hear my vizslas do when they are happy.  I did not sense any aggression at all.  The wolf seemed curious and timid. 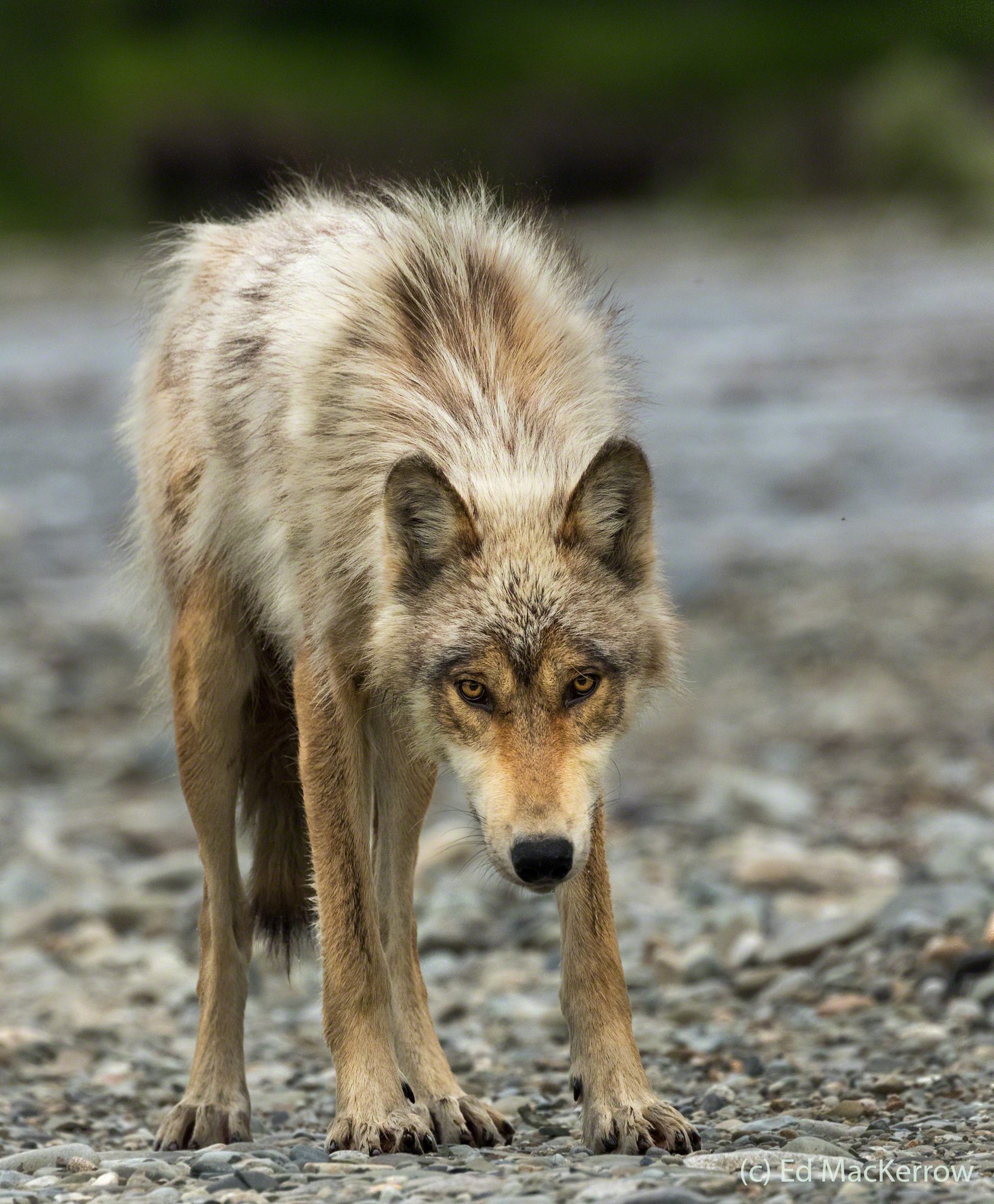 Wolf curious as to why I am laying on the ground.

At this point the wolf could have easily grabbed me in one short pounce.  Wolves are big and very tall.  From my vulnerable position on the ground my excitement paused for a moment.  I knew that wolf attacks on humans were very rare.  I felt the can of bear spray in the leg pocket of my pants.  The look on his face was not one of aggression though. We both remained curious and calm. Thank you Mr. Wolf for the beautiful encounter!

Wishing I had my other camera with the wide-angle lens in hand, I realized it was time to thank the wolf and say goodbye.   I slowly sat up, making sure not to alarm him. Continuing to gently talk to him as I rolled up to a sitting position, and then a crouched position backing slowly away.  The wolf stood around while continuing to look at me, shaking water off his wet coat a few times and then he slowly exited the creek bed into the thick green forest.

Before this close encounter, and a few other wolf encounters, I had the “understanding” that there were only two attacks on humans by wolves.  Surprisingly I had heard this from more than one wildlife biologist.  Curious about my experiences, I did some more research.  This turns out to be incorrect.

Although extremely rare, there have been more than just a couple of wolf attacks on humans.  The majority of these attacks were by wolves with rabies, although there are data showing some predatory attacks on humans by healthy wolves.

On my last trip I had three different individual wolves, not in a pack, stop in their tracks when they spotted me, then change their course of direction to come closer to me and investigate.  They all seemed curious, not aggressive.  I do not know why they approached me though.  I am confident they were curious and not aggressive or in a predatory mode during my encounters.

In the bigger picture they need to remain fearful of humans — else they will end up being shot or trapped.  Likewise it is wise for humans to be respectful and cautious of wolves — especially this close.  Having bear spray in hand during these encounters felt right to me.  In subsequent encounters with the same individuals they kept their distance from me and my camp.  That also felt right to me!

“The fear of death follows from the fear of life. A man who lives fully is prepared to die at any time.”  — Mark Twain 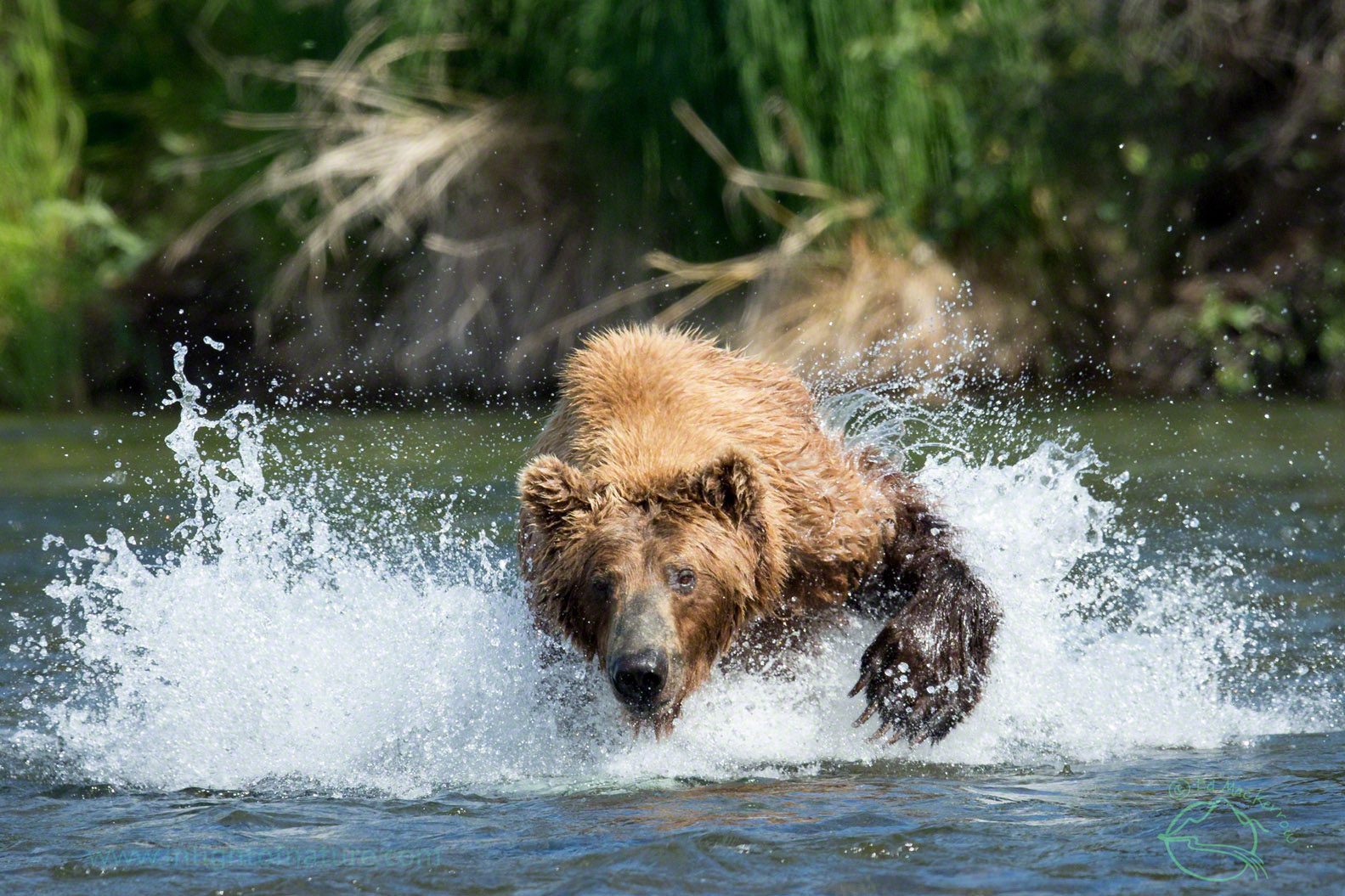 Scroll to top
error: Alert: This content is protected by international copyright, and tracked!