Surprise in the Desert

Way out in the desolate badlands of northwest New Mexico exists a strange landscape of peculiar rock formations.  These tall pinnacles of sandstone rock, usually capped with a resistant boulder, decorate the landscape in all kinds of shapes. Known as “hoodoos”, they bestow a creative palette for a landscape photographer.

Walking among the hoodoos gives me the feeling of being on another planet. This trip was a welcome respite after teaching photography workshops all March.  Two photographer friends of mine, Stephen Lefkovits and Ron Doebler, flew out to New Mexico to join me on this photography journey.  Experiencing this photographer’s wonderland with two other professional photographers was a treat.  Together we weaved through the maze of interesting compositions, each working quietly while smiling as the landscape unfolded in front of us. 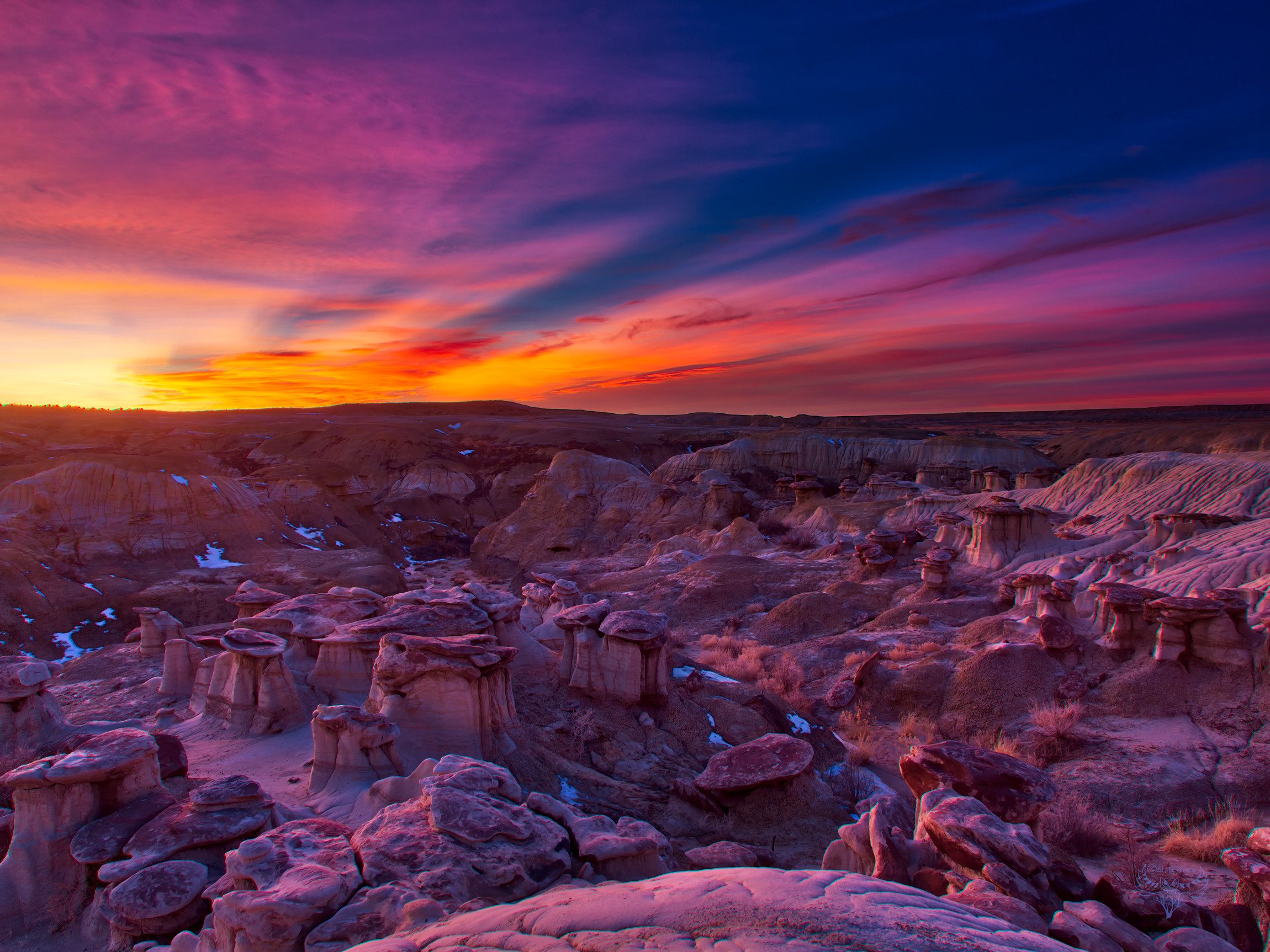 Alien landscape lights up at sunset.

As we hiked into the badlands one morning we were surprised to meet a large brown llama.  The llama looked just as surprised as we were.  The llama stared at us with his long neck reaching high to keep an eye on us from behind rock formations.  Now it really seemed like a bizarre landscape, complete with unusual wildlife!

Soon a second llama appeared.  This one was solid white and very close to us.  The two llamas seemed to be communicating with each other, looking back and forth at each other, and at us. 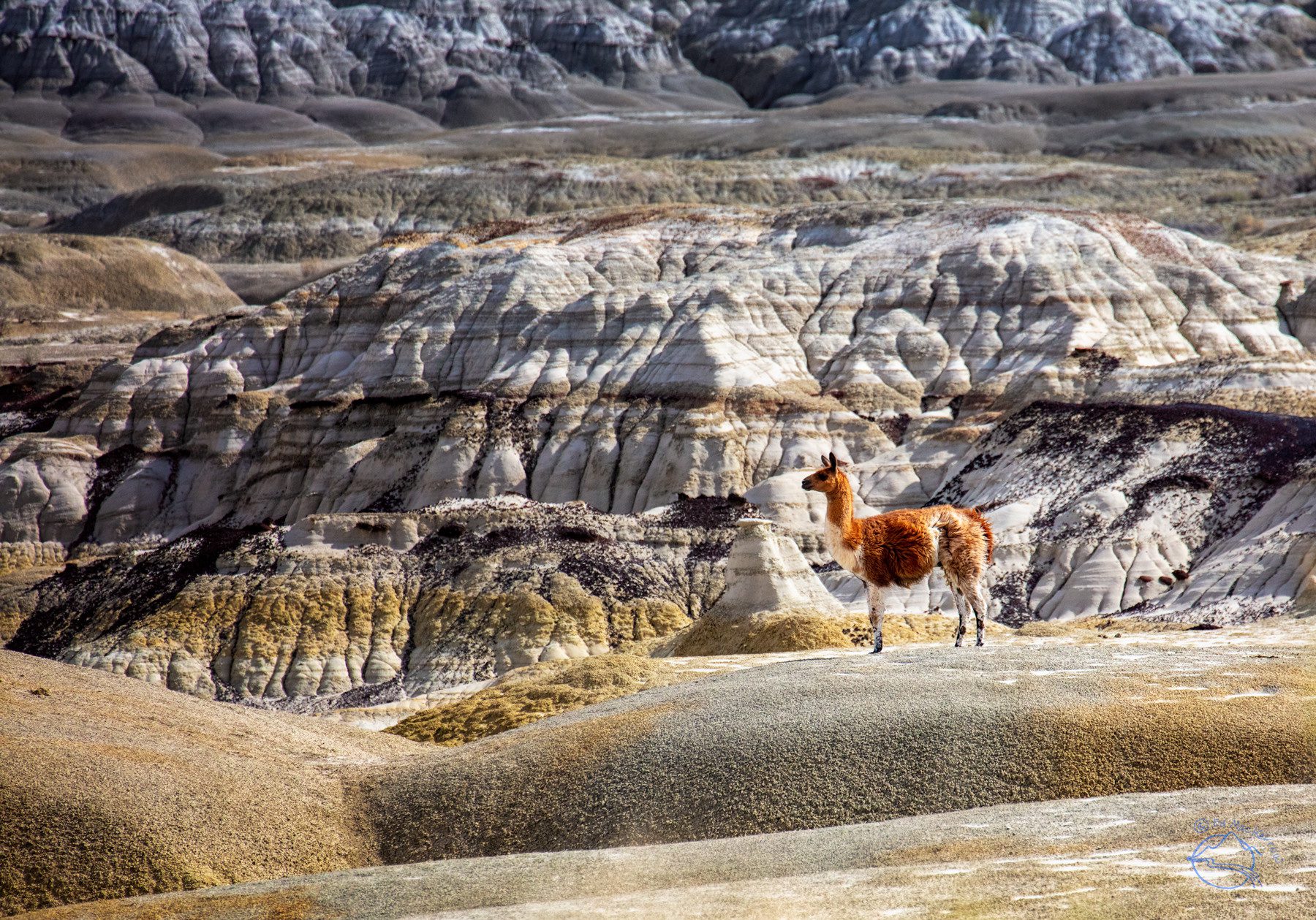 Llama encounter out in the hoodoos.

Steve and I wondered why the llamas were here.  Did they escape from a farm, or were they deserted and left out here in the middle of nowhere?  The llamas nibbled at what little vegetation existed amongst the sand and rock formations.

The llamas started to look at each other more frequently, approached each other, and then bolted very fast out of the area.  Before I knew it they were very far away and running fast — as fast or faster than a horse! 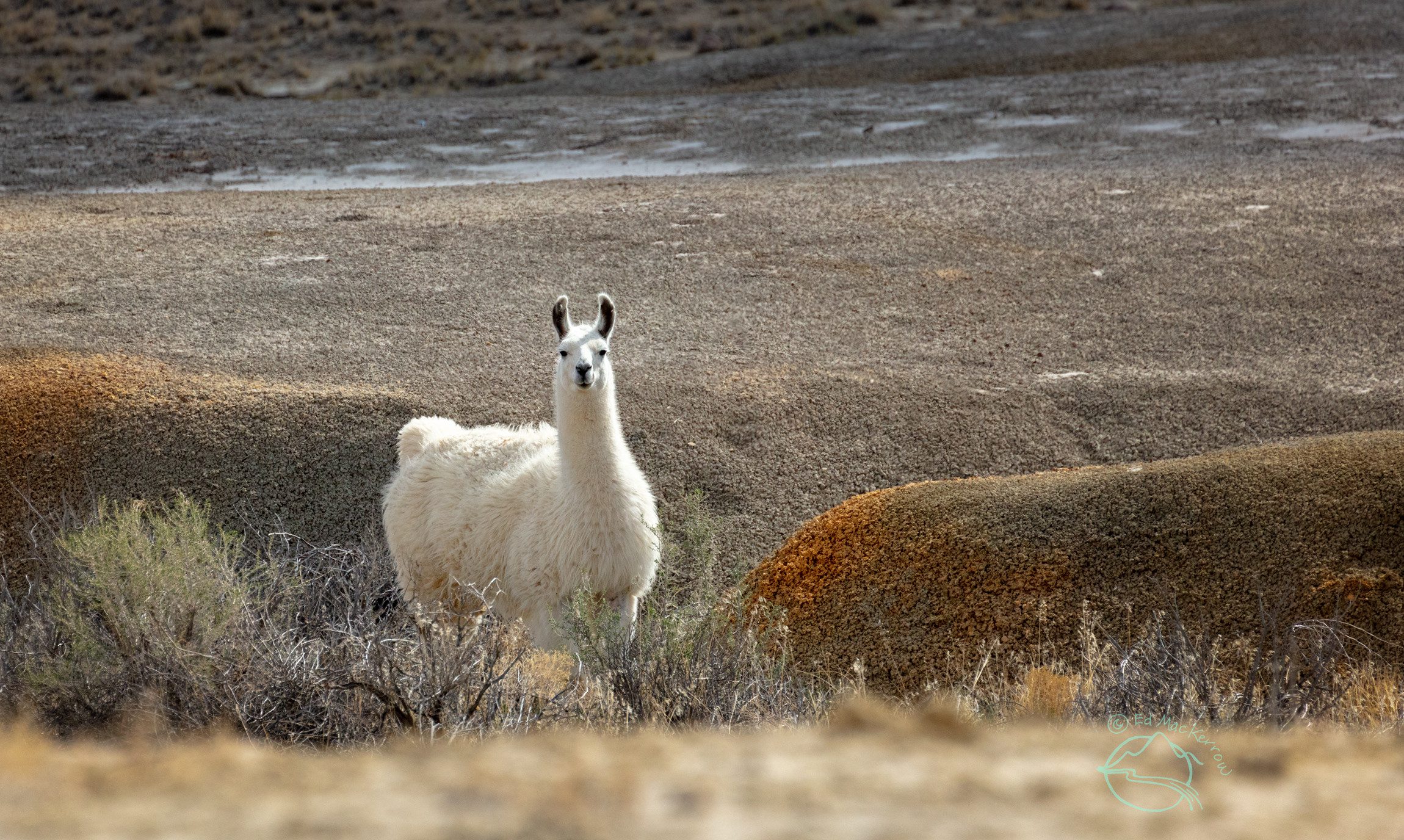 The second llama watching us carefully.

The llamas had bolted for a reason.  They had sensed an intense wind and dust storm well before it had arrived.  This was a haboob (Arabic for “strong wind”) sandstorm.  Soon Steve and I were being blasted by sand.  Sand blew in our eyes, mouth, and ears as we tried to escape into small canyons in the badlands.  I could feel grit inside the mechanism of my lens now.  The light was grey and harsh, no shadows to be seen anymore.

We worked our way back towards the truck.  We had to cross a wide open area on our way back.  Once we got out in the open the sand was blowing so hard I could feel the skin on my arms being abraded and burnt by it.  The scariest thing was that we could see the full power of the sandstorm off in the distance.  What we were experiencing was just a warm-up for what was coming.

By the time we were back in my truck, the windstorm was now full force.  We came to our senses and retreated from camping in the desert, exposed to the winds.  We retreated to the quiet village of Abiquiu on the leeward side of the Jemez Mountains.  Our decision to completely change our trip plans was the right thing to do!  Earlier in the day, we were discussing how it pays to adapt to the conditions and not stay stuck in a trip plan that is not working out. The best trips are the ones with a loose agenda.

Later we learned that the native peoples use “guard llamas” to protect their flocks of sheep.  The llamas fend off coyotes and other predators in this exposed land.  These two llamas were far from any sheep flocks we knew about.  We do not know if they were just out roaming away from home, or if they were escapees and awol from their sheep guarding duties.

This trip was a powerful experience for us, to run into llamas in such a wild place and to experience the haboob storm first hand.  Seeing the llamas sense, and react, to the sandstorm reinforced by my view that animals are much smarter than we give them credit for.

When everything seems to be going against you, remember that the airplane takes off against the wind, not with it.
–Henry Ford 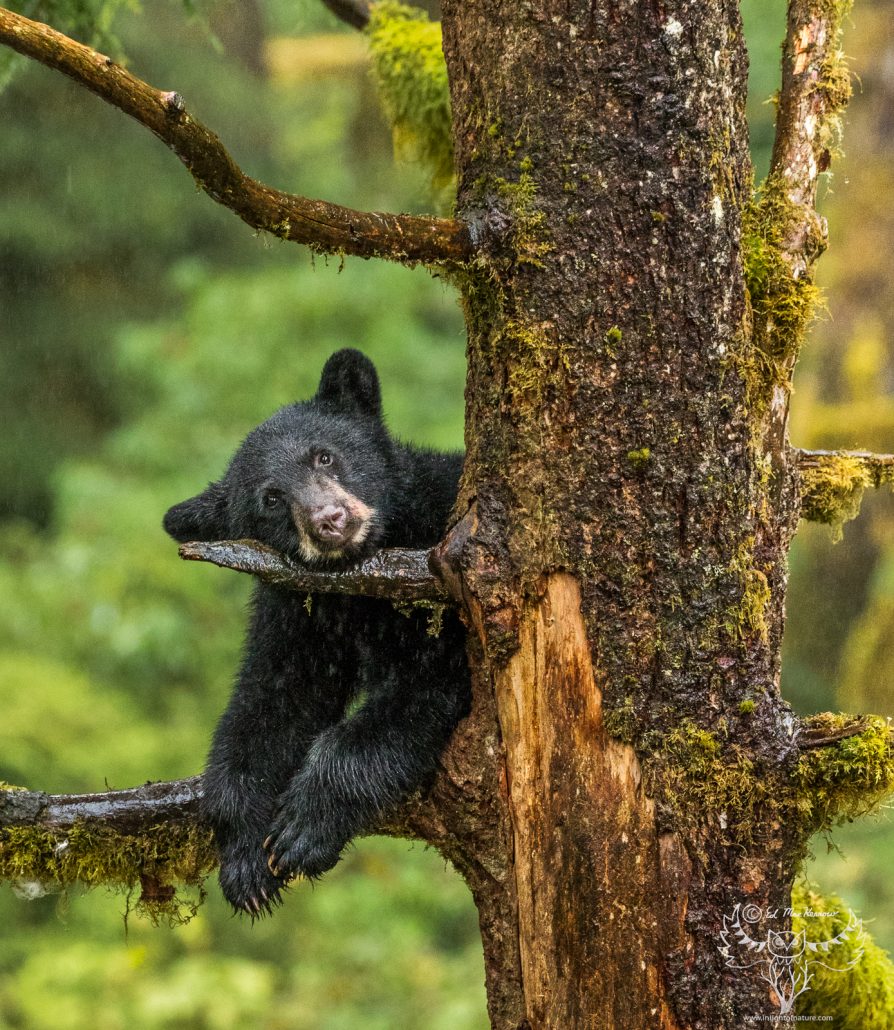