Super Moon, blue moon and a total lunar eclipse this past week motivated me to wander the north-west corner of New Mexico in search of photographic opportunity.  Ship Rock ( “Tsé Bitʼaʼí” in Navajo) seemed to be a great location to watch the eclipse. Even though I had photographed lunar eclipses near Ship Rock in previous years I returned once again to this beautiful landscape.

Clouds are a nemesis for eclipse viewing.  They can add nice drama to an eclipse photograph as long as there is a gap in them for the moon to shine through.  Weather forecasts called for “partly cloudy”.  I took my chances and drove the 3 hours from Santa Fe to Ship Rock the night before the eclipse.  The eclipse would occur a couple of hours before sunrise, and moonset, the next morning.  My plan was to camp and get a few hours sleep before the big event.  When I got to Farmington, New Mexico I opted for a hotel over camping.  Normally I prefer camping over hotel rooms, something that night spooked me from camping out.  Violent crime is on the rise in the Navajo Nation and in adjoining public lands.

On a previous photography trip in this area I was awoken from a deep sleep while a pickup truck spun “donuts” at high speed around my tent.  That was a scary experience!  Imagine being inside a small backpacking tent while some drunk yahoos drive within feet of you!  Eventually they drove off and crashed into a large sagebrush — which rendered their old truck – stuck.   Thank goodness  – I thought! 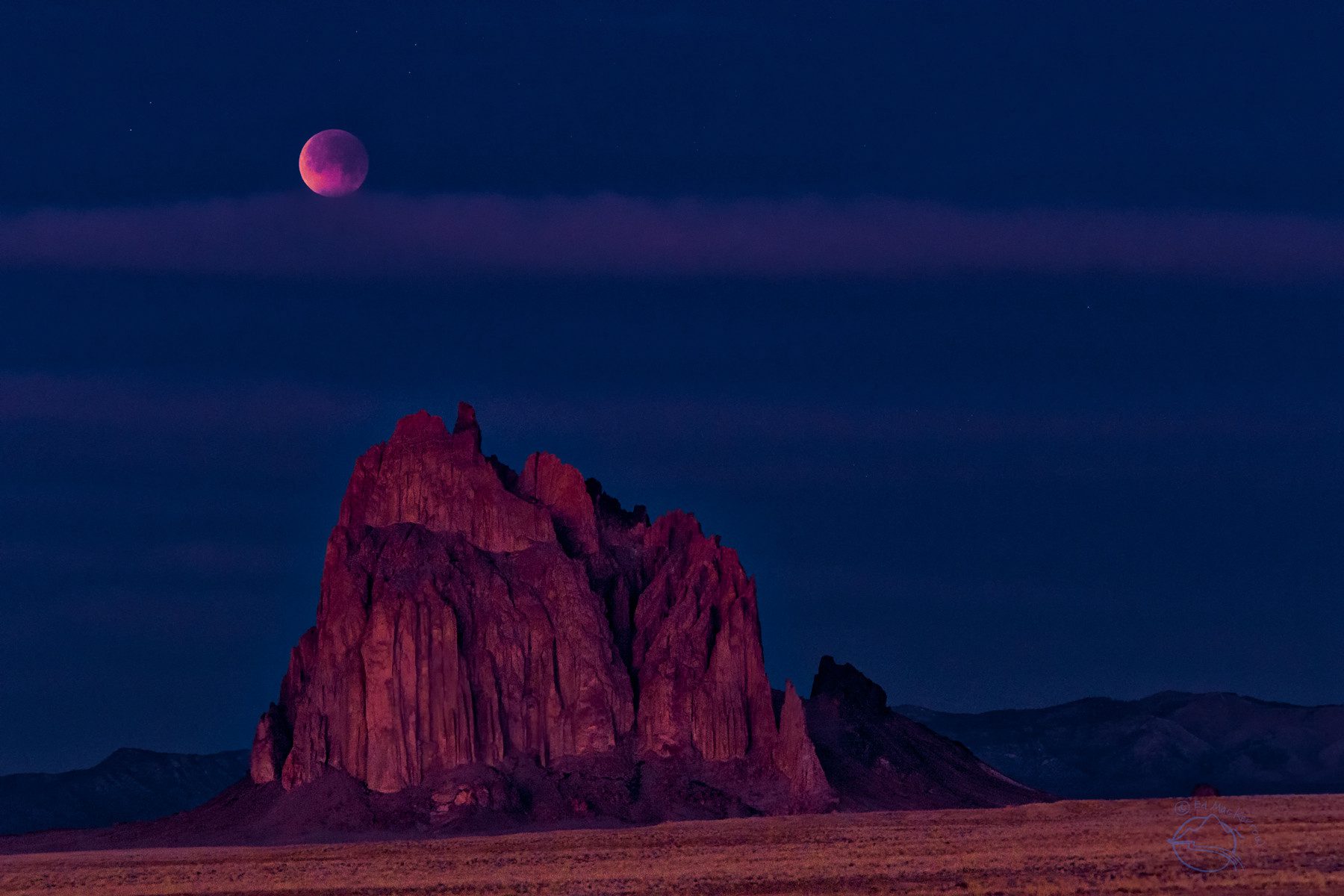 Clouds diffused the light from the moon as the time for the eclipse neared.   The prognosis was not looking good, except there were a few gaps of clear sky in between the cloud layers.  My plan, and calculations involved figuring out where to setup my tripod to have the peak of the eclipsed moon perched on top of Ship Rock.  It almost worked perfectly!  A thin bank of opaque clouds ended up blocking the view when the moon was perched on the summit.  All it takes is a thin layer of clouds to scatter the moonshine and blur the photo. 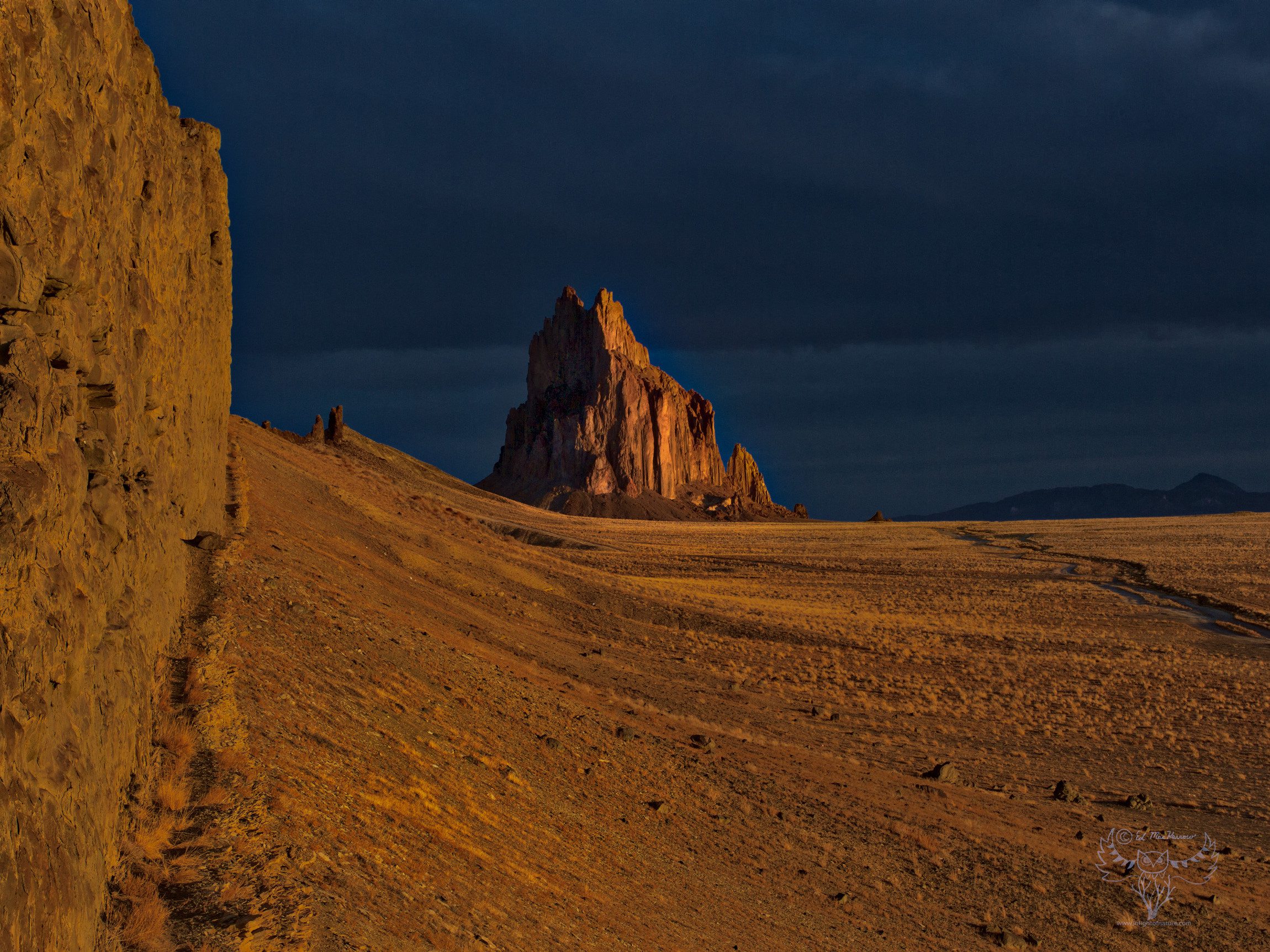 Ship Rock and one of it’s dikes at sunrise.

Ship Rock is very photogenic.  Early morning light, or sunset, lights it up nicely above the valley floor.  After photographing the eclipse and the light of the “golden hour” at sunrise I filled a large trash bag of litter, mostly empty booze bottles.  This is my new habit after photographing sunrise — when I get back to my truck I walk the side of the road picking up trash.  The average for New Mexico is about 100 yards of roadway to fill a large trash bag.  There is more trash these days then when I was growing up.  I thought people were getting better about respecting the landscape and “Mother Earth”?  Wishful thinking on my part.

At this point I needed to escape to more remoteness, away from man’s marks on the Earth.  I knew just the place.  A very remote place in the desert decorated with incredible hoodoos, arroyos, and petrified trees.  It was just the place for me to improve my attitude.  A  couple of herds of wild horses watched me as I hiked out into wild lands with my tripod and pack full of camera gear. 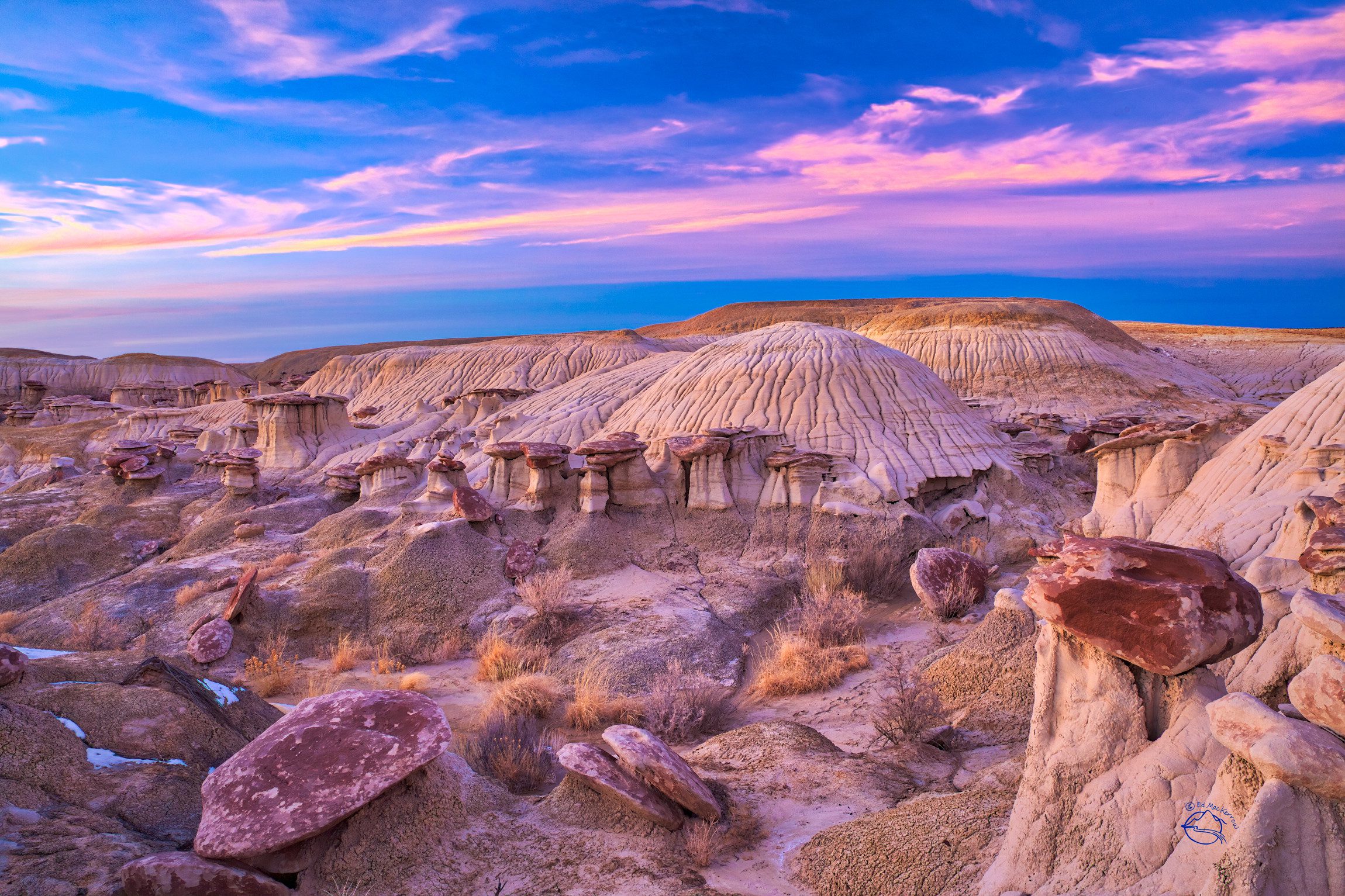 Out where it is so quiet it is loud.  It was a good escape for me to venture out into this whimsical desert wilderness until dark.

This trip was good for me.  I saw the beautiful side of nature, the desert landscape and a colorful lunar eclipse.  On the trip I also saw the ugly side of man’s impact on Earth, and societal strife in some down and out places where hope seems to be extinct.  Where respect for nature is gone.

My perspective as a scientist has lost hope on people working together to improve things — for each other, future generations, and for the Earth.  This is not something I am proud of and I need to improve my attitude and get back into the fight — helping in someway to turn things around.  Nature photography is my current approach since I felt that truth and science fell on deaf ears and biased beliefs.  Perhaps by exposing more people in the USA to the beautiful lands we share as citizens, we might work together to solve problems, instead of working against each other to exacerbate things. 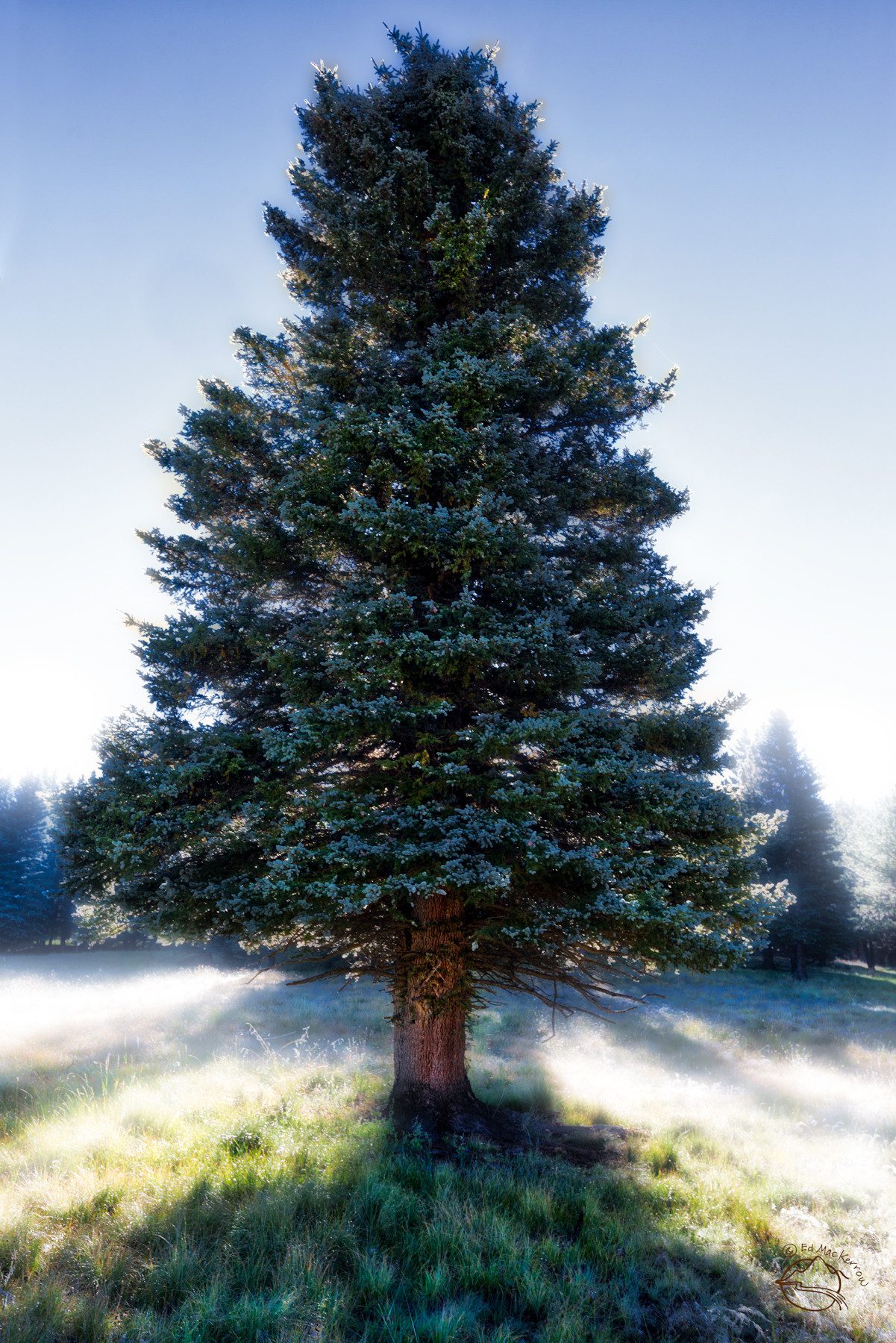 Out in Nature we See the Light