California has mountains ! ??  Many think of beaches, Hollywood, and Palm Trees when California comes to mind.Spending half of my life in California left vivid memories of hiking trails in the redwoods, mountain biking through cool forests of tall giants, rock climbing the pristine granite walls of the Sierra, backcountry skiing endless snowfields and mountain passes.  I took it all for granted, thinking that mountains like these exits in many places.  They do not.  California has a variety of impressive and unique mountain ranges.  The state’s long north-south orientation coupled with a young and active geologic hot spot where the Pacific Plate dives below the North American Plate provides incredible mountain ranges to explore.  The closest I have seen to it is the South Island of New Zealand where the Southern Alps run a long north-south distance, much like the mountain ranges in California.

The Sierra Nevada are my favorite range on earth though.  Forests of Giant Sequoias are split by deep river canyons on the west side.  Granite domes and walls in places like Yosemite Valley, Tuolumne Meadows, the mystical Needles, and Lovers Leap were my playground growing up in California.  The Sierra were my escape from watching Cupertino grow from beautiful orchards and hills that I roamed as young kid, into Silicon Valley.  Driving back from the Sierra on Sunday nights my buddies and I were already planning where we would go the next weekend.  Climbing was uncrowded and there was an endless supply of drainages to hike, rock walls to climb, and ski traverses to explore. 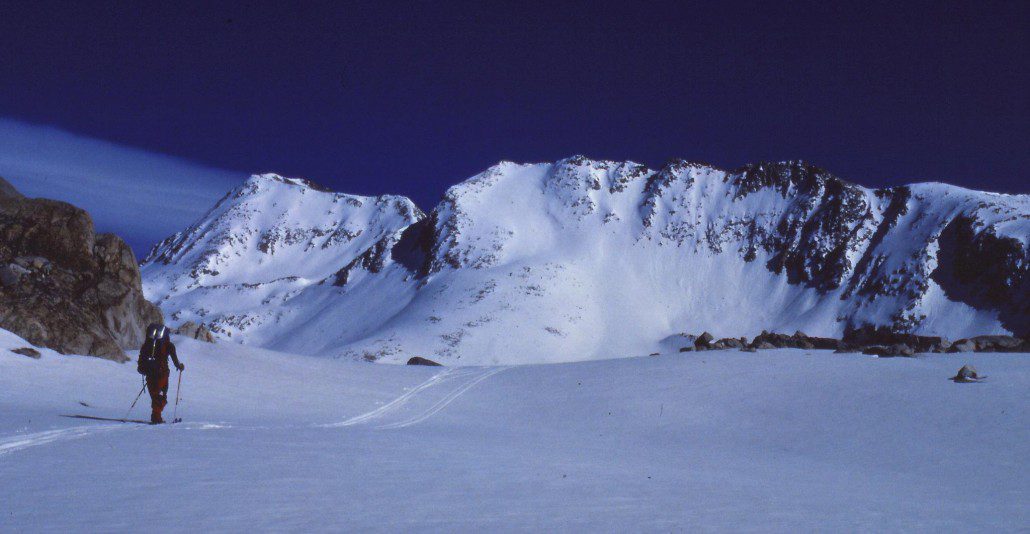 Each year when Tioga Pass opened, often not until June, we would rush up to Tioga to ski the corn snow and climb the granite polish in Tuolumne.  Most of the time my heels  would be blistered and bleeding from my leather telemark ski boots.  Taping them up and then cramming them into tight fitting rock shoes until my heels were numb was all part of the ritual.  We would go for days without showers, no time for those.  Campgrounds in the park were also considered off limits since we were used to camping out on the high peaks or in the remote alluvial fans and canyons of the “East Side”.  We found out how to sneak free showers where we could, or to pay a few bucks in places that were a bust.  The showers in Tuolumne Meadows sucked because you had to push a chrome metal button to keep the water on — an old pair of socks tied tightly around these National Park Service issue shower faucets worked like a charm though.

Meals were simple, often Top Ramen for dinner and  a box of Cheerios or Pop Tarts for breakfast.  The looks we would get from tourists visiting Yosemite while we “dirt baggers” munched our breakfast on the curb was funny.  A few times people felt sorry for us and offered us food or money.  We had jobs and advanced college degrees, however I guess we looked down and out to some.

Over the summer school break I spent as much time as possible in the Eastern Sierra and Tuolumne Meadows. I soon realized that being in school meant summers off in the Sierra.  So, I stayed in school.  When I graduated from San Jose State University with a BS in Physics  I had a part-time job at Western Mountaineering and the highlight of each year was the time spent in the Sierra.  A professor of mine referred me for a great job at small laser company in Silicon Valley.  I had to leave the Sierra to drive down for the interview and worst of all I had to put a suit on and get all dressed up.  Yuck.  I remember driving to the interview and taking off my tie thinking “this is not the real me, and if they do not want the real me, then I am not interested…”.  I was offered a great position as lead scientist in a company of 20 people.  I turned the offer down, simply stating that I had hoped to go directly to graduate school.  The company that made the offer would soon become one of the wealthiest companies of record.  The professor that recommended me for the position was not too amused with me.  “You could have bought Yosemite, you Fool!” was one scolding I remember. 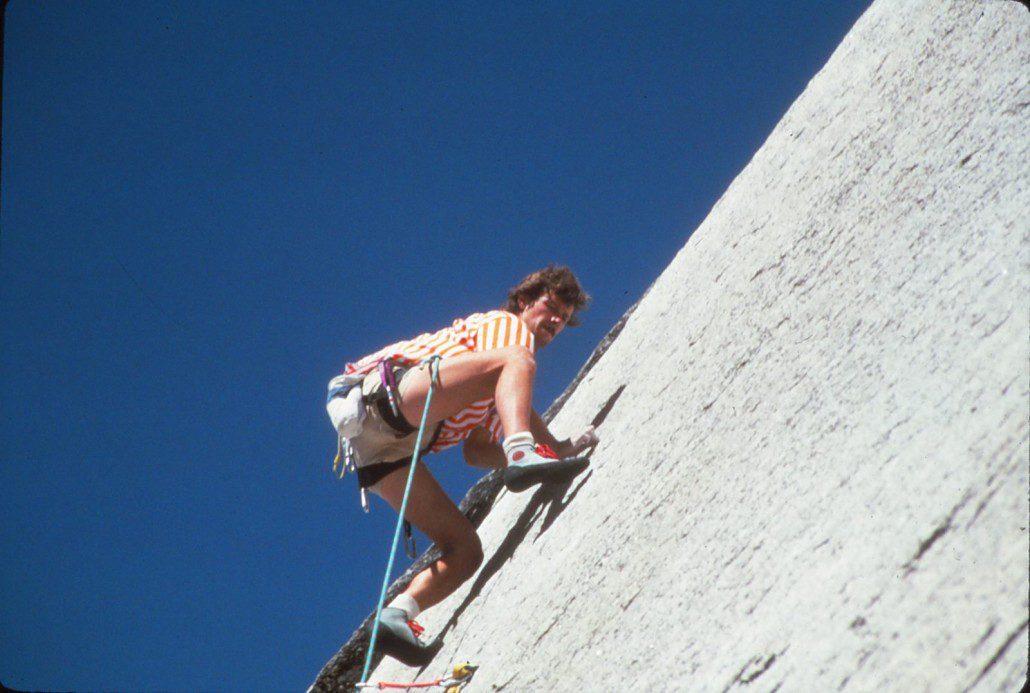 Finding a graduate school with mountains close by led to University of Colorado at Boulder and the University of New Mexico in Albuquerque.  My brother was doing a medical residency at UNM which made a move to Albuquerque easier, and a climbing friend of mine also told me about the great climbing in New Mexico.  New Mexico it was.

Driving over Tioga Pass in the late summer with my Toyota truck loaded with my belongings was hard.  Looking in the rear view mirror at the Sierra Crest diminishing in the distance brought tears to my eyes.  I was going to miss this special place that was my place of refuge and solitude.  I remember saying out loud, ” I will be back!”

The Rocky Mountains of New Mexico and Colorado were a fun change for a while.  I could climb after work more easily than in California and skiing was closer to home.  The climbing routes were shorter though and the rock was nowhere as nice as back home in the Sierra.  I would go home for summers. Each year I went back to the Sierra I noticed I was getting slower on climbing the long routes in the Sierra.  I was getting used to the shorter routes of the Rockies.  In California you have to be fast on lead and able to quickly swap the climbing rack between leaders.  The lines were cleaner too back on the California granite.  In the rugged Sandia Mountains in New Mexico the long granite routes were very different.  Rarely could you really tell if you were actually on the route or not, and loose rock was common. 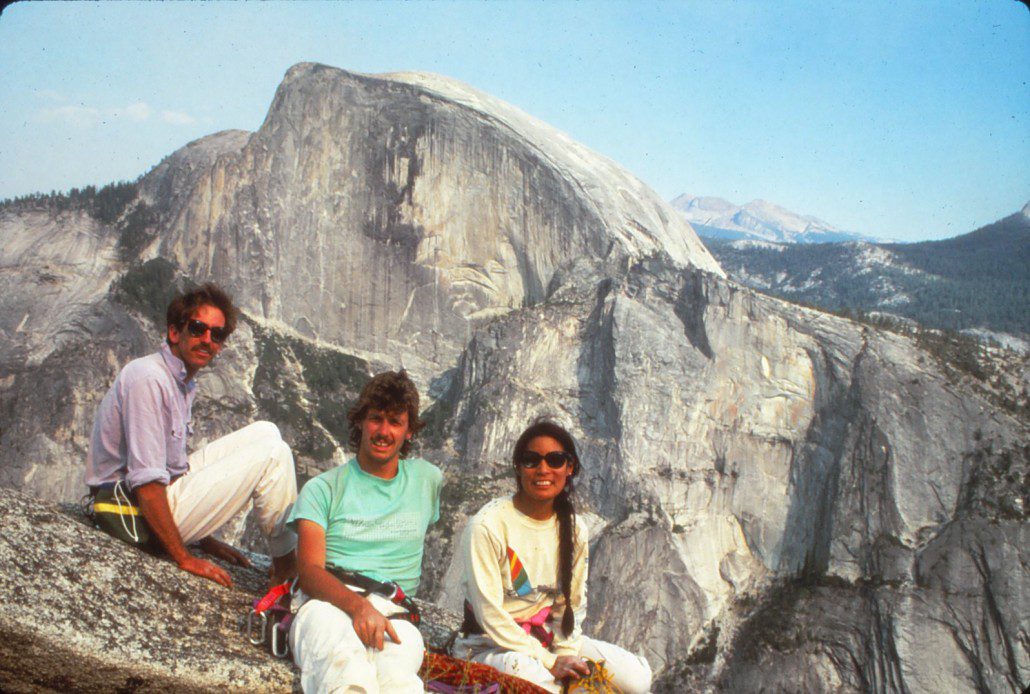 I remember taking a Canadian climbing friend from New Mexico out to the Sierra.  It is sometimes considered “cool” for some Canadians to bash the US, and in the outdoor athlete circles it seemed especially true when they were around mountains in the US.  “There is no way the mountains of California could even compete with those of Canada”.  Driving north along Hwy 395 from Lone Pine, through the sleepy town of Bishop at 4,000 elevation and sandwiched between two 14,000 foot high mountain ranges, and up and over Tioga Pass the Canadian climber was kind of silent and in awe. When we got to the Sierra the Canadian climber kept making excuses for why “we” should not climb this route, or that route, in Yosemite — routes I had climbed many times in the past. The famous Nike slogan “Lead, Follow, or Get Out the Way” applied here.  He was overwhelmed by the big rock walls of Yosemite and Tuolumne.  Ironically, years later, the snooty Canadian climber’s hero, Peter Croft, moved permanently from Squamish BC to live in Bishop and climb the Sierra granite.  Peter Croft is an amazing climber and sets a great example of humility while he achieves incredible feats in the Sierra.  The best reward is the journey itself.  Peter Croft free soloed many routes and kept quiet about it all.  His actions and achievements spoke for themselves.

Now I do not get back to the Sierra very often.  It feels disrespectful to me when I only spend a day or two out in the places that shaped my life.  A few years ago I attempted a month long solo ski traverse of the Sierra.  I was seriously humbled by the vertical relief that I had forgotten about. I am much older now than the days of my youth in the Sierra Nevada.  Climbing over Southfork Pass in the Palisades on my second day was sobering.  I was only able to finish some this tour due to late season snowstorms that forced me to camp and burn fuel while waiting for the storms to lift.  I hope to attempt it again soon.  That trip was amazing in that it rekindled my love for the Sierra.  The special light that illuminates complex granite spires and the absolute serenity and lack of people was still there.  Yep, lack of people.  I went for three weeks and I did not see one other person.  In the High Sierra it is easy to find solitude in a pristine wilderness void of logging roads, mines, and hunting camps. 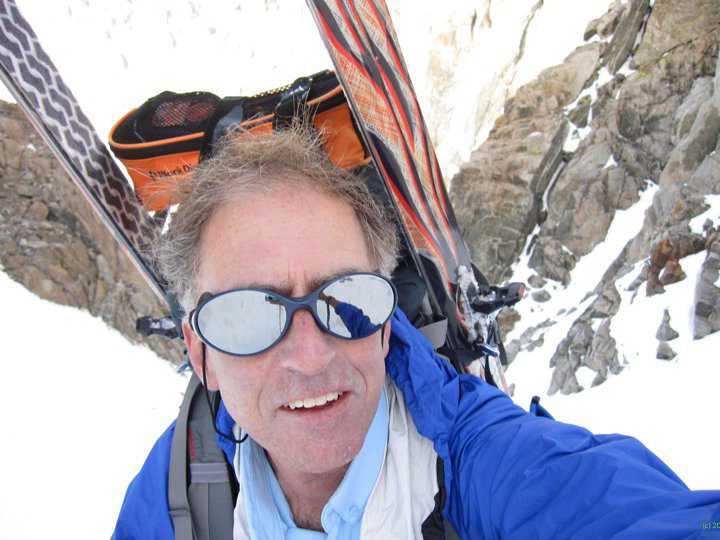 Last week I drove over Sonora Pass and Tioga Pass while enroute to giving some slideshows in California.  Driving along Hwy 395 I could tell the Sierra was very dry and in dire need of snow soon.  From the White Mountains I looked across the Owen’s Valley to see struggling snowfields and the Palisade Glacier looked small and fragile.  Large forest fires burned in the Sierra.  The Central Valley of California had changed a great deal from what I remember — agriculture with small towns spread far apart.  Now it was soaked with dense air pollution and the cookie cutter shopping malls that seem to define America.  Talking with a young man in Lee Vining about his work in taking disadvantaged youth from the Central Valley into the backcountry of the Sierra I learned how many of these kids lived in Merced and had never been to Yosemite or the Sierra.  Hopefully more youth will be able to experience the wilderness and all it provides.

Driving over the windy Sierra passes (only a few roads cross the Sierra) the forests were burnt and dying.  Early in the morning I watched a young first-year Great Gray Owl, the recently discovered Sierra Nevada sub-species (Strix nebulosa Yosemitensis) hunting a forest that was struggling.   I wondered how many centuries this great owl species lived in the deep forest hideouts of the Sierra and whether its species would survive into future centuries.  The extreme drought conditions will challenge the survival and reproduction of this young owl.

Looking up at the jagged peaks of the Sierra I remembered the climbers and skiers who pushed their limits to experience the mighty Sierra Nevada.  Many of them are no longer with us.  Some died of old age, wilting away in some hospital bed, while others died suddenly in accidents (Alan Bard, John Bachar, Galen Rowell are eternal icons of the Sierra Nevada who left us suddenly).  I thought to myself how the mountains will be around much longer than humans will be.  I just hope that some species are able to enjoy living in these mountains, whether it be Golden Trout, Great Gray Owls, or Giant Sequoias. 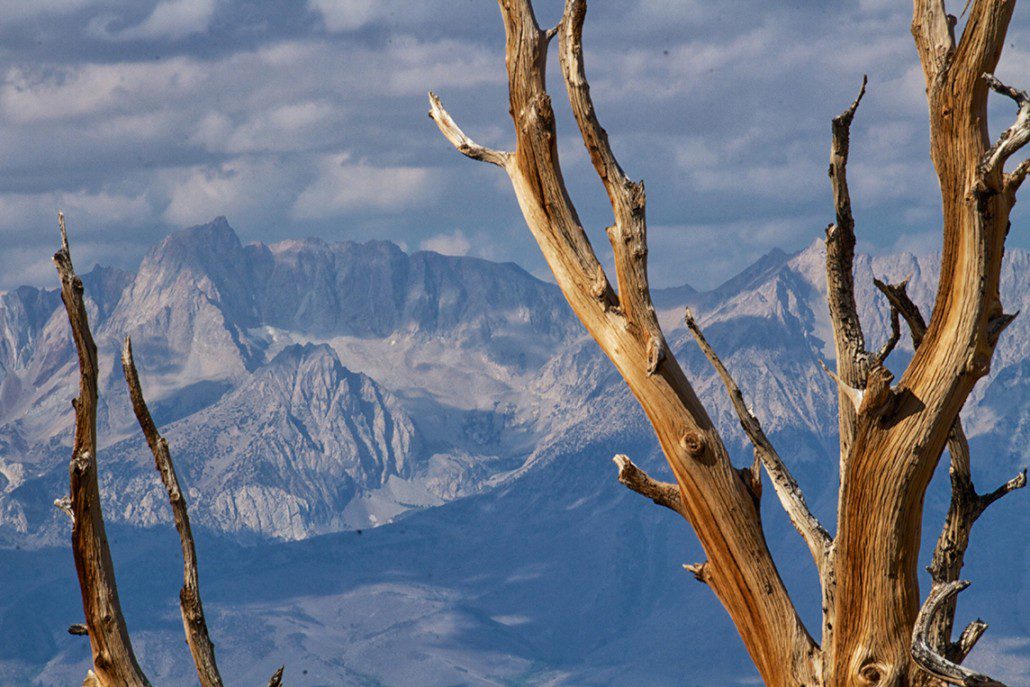 A parched Sierra Nevada during the 2014 drought as seen from the Bristlecone Forest, Inyo National Forest.

“Walk away quietly in any direction and taste the freedom of the mountaineer. Camp out among the grasses and gentians of glacial meadows, in craggy garden nooks full of nature’s darlings. Climb the mountains and get their good tidings, Nature’s peace will flow into you as sunshine flows into trees. The winds will blow their own freshness into you and the storms their energy, while cares will drop off like autumn leaves. As age comes on, one source of enjoyment after another is closed, but nature’s sources never fail. ”