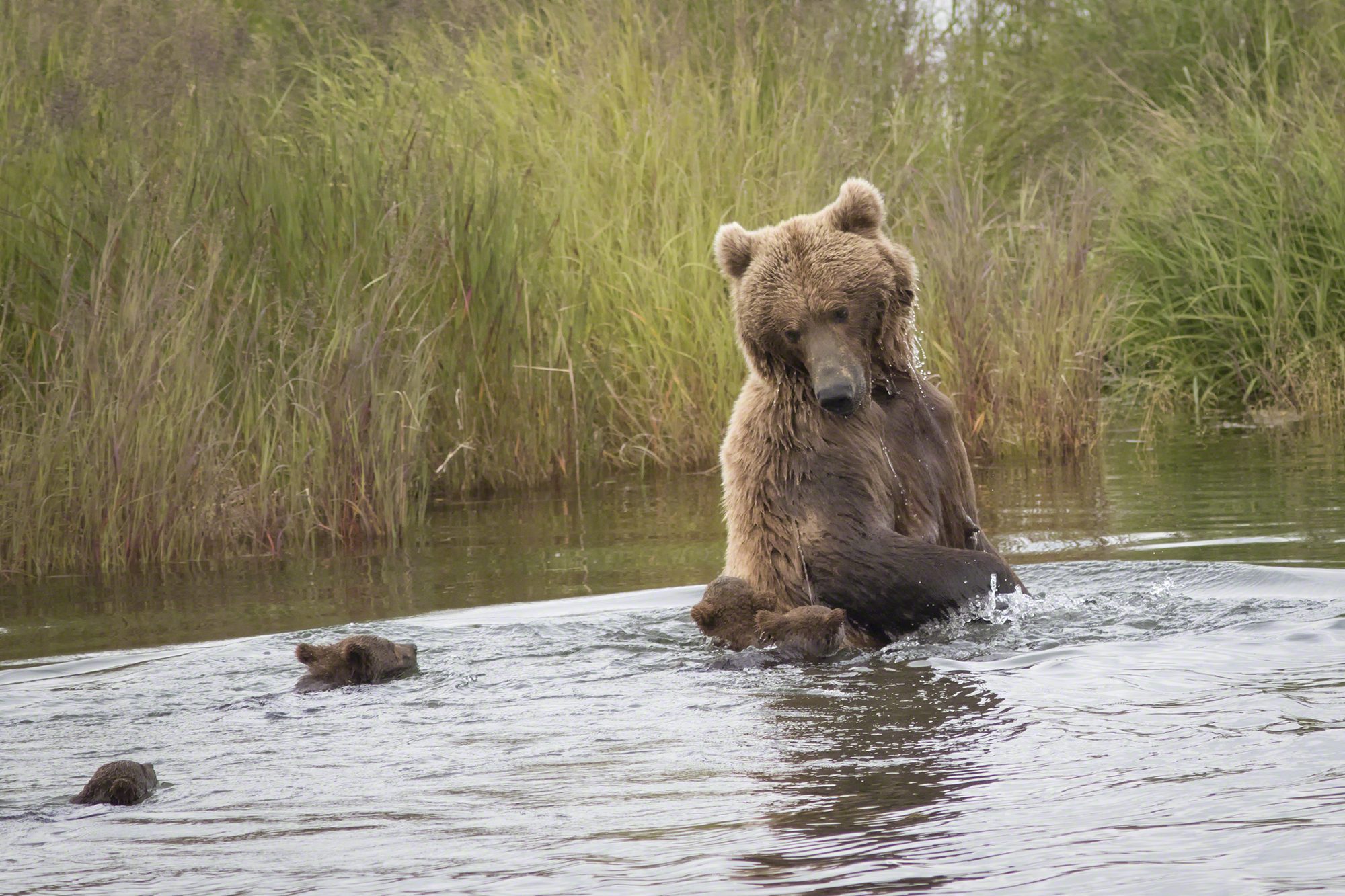 Mothers of all species are challenged with raising their young.  Watching mother Brown Bears in Alaska (a.k.a. “Coastal Grizzly Bears” — Ursus arctos alascensis ) this past July in Katmai National Park reinforced this for me. Female grizzly bears do not raise young until they are at least 5 years old and then they only have 2-3 cubs once every three years or so.  The reproduction rate of grizzlies is the lowest of all mammals in North America.  Mothers compensate for this by being very alert and aggressive in defending their cubs.  I witnessed this up close and personal at Katmai National Park & Preserve.

My first encounter was with a mother and four spring cubs (cubs born the same year are referred to as “spring cubs”).  She was beautiful with her golden fur and huge round flat face. She was confident and yet I could tell she had a lot on her plate with four young cubs.   She had to get enough food to feed four little ones, and protect them from predators at the same time. As mother of  four cubs she had to consume enough food each day to nurse her cubs with 4 quarts of milk per day.

She stood tall in the river looking for salmon while her cubs cried and moaned from the cover of tall grass on a small island.  Mom would look over at them and vocalize a “huff-huff” call.  It seemed like she was telling them to be quiet. It was in their best interest to hide quietly.  Adult male bears (“boars”) in the area could easily kill the cubs.  Male Grizzly Bears kill cubs so they can mate again with the female.  I could not help thinking to myself, “what bastards those male bears are!”.  Here the mother bear was alone trying to feed the family, and the males were one of the biggest threats to her and the cubs. Mother Nature has somehow let this behavior dominate over eons.  Perhaps as a self-limiting mechanism to keep population densities in check.

Resident bear experts at Katmai emphasized that not all of her cubs would make it through their first year. Almost half of  Grizzly Bear cubs die in their first year through predation and starvation.

Her spring cubs were tiny.  Just like “Teddy Bears” they were dwarfed by Mom. She was not the only mother bear busy trying to feed tiny spring cubs along the Brooks River and Naknek Lake in Katmai.  There was another sow with three spring cubs, and one with a single spring cub.  Other mothers were teaching their yearling cubs (born the previous spring) how to fish for salmon.

These families tended to stay downstream about a mile from the famous Brooks Falls where spawning salmon traffic backs up. Dominant male bears fight for prime fishing locations to catch the salmon as they leap upstream over the falls.  Bears are antisocial for most of the year.  When the sockeye salmon run they are forced to be around each other in the salmon streams. Fights are common between the bears, especially over prime fishing spots.

The salmon moved upstream in waves.  Sometimes there were so many salmon that I watched bears catch a salmon, take one quick bite, set it aside, then catch another, and another.  At other times there would be very few salmon moving upstream. These lulls were correlated with the timing of commercial gill net fishing periods in Bristol Bay.  At these times the bears were grumpy and would frequently get in fights.

A mother bear with a single spring cub that was having trouble  catching salmon downstream made a bold move and approached Brooks Falls.  This seemed like a fatal mistake. 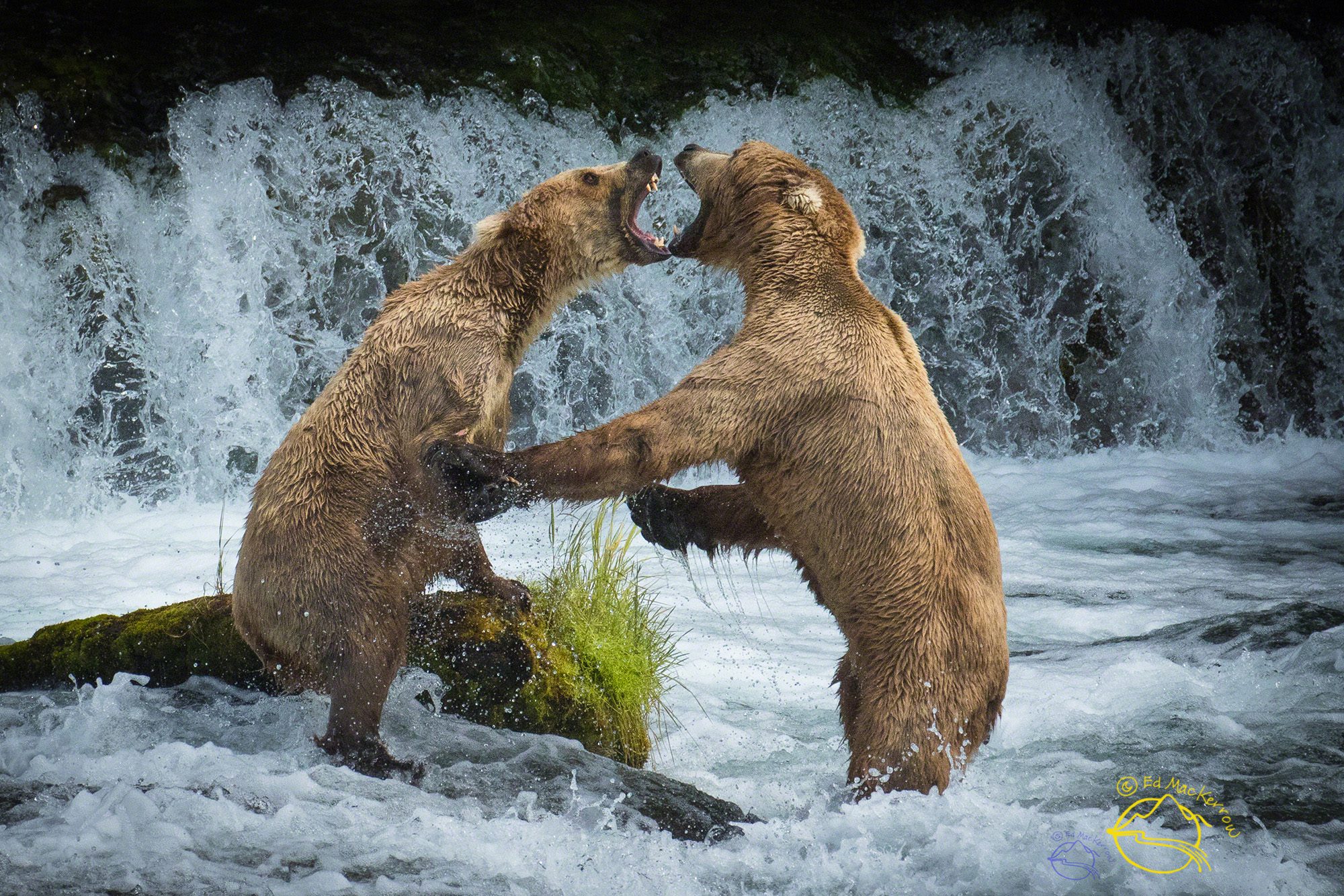 When the mother and single spring cub first approached the falls a huge male left his fishing spot in the “jacuzzi” pool and began to urinate profusely as he swaggered out of the river and up the grassy hill towards the mother and cub.  The mother bear fought him off as her cub quickly climbed to the top of a spruce tree.  Soon afterwards she also climbed the tree to escape the huge male.  The look of fear and desperation on her face was sobering.  We did not want to watch anymore.  I started to feel nauseous watching the attack.   Watching the 600 lb. mother brown bear climb the tree I wondered if the tree would snap in half.

Mama bear and the cub stayed in the tree for a couple of hours, even after the aggressive male went back to his spot in the river.  We all wanted the mother to leave the area.  Unfortunately after she and the cub climbed down they headed directly to the falls, crowded with male bears, to fish!  The anxiety levels rose as we anticipated another attempt by a male to kill the little cub.

This mother bear was not afraid though.  She projected confidence and determination as she started to fish in the pools just below the falls.  Another male bear approached her with the tell-tale swagger of the big boars.  By now the little cub was visibly shaking in fear.  It almost looked as if he was saying “Mom!! Lets get out of here now…”.  The cub hid behind his mother.  The male bear approached.  Although I did not want to witness a cub getting killed, I focused my camera on the bears and got ready for a bloodbath.

Below is the sequence of images captured. 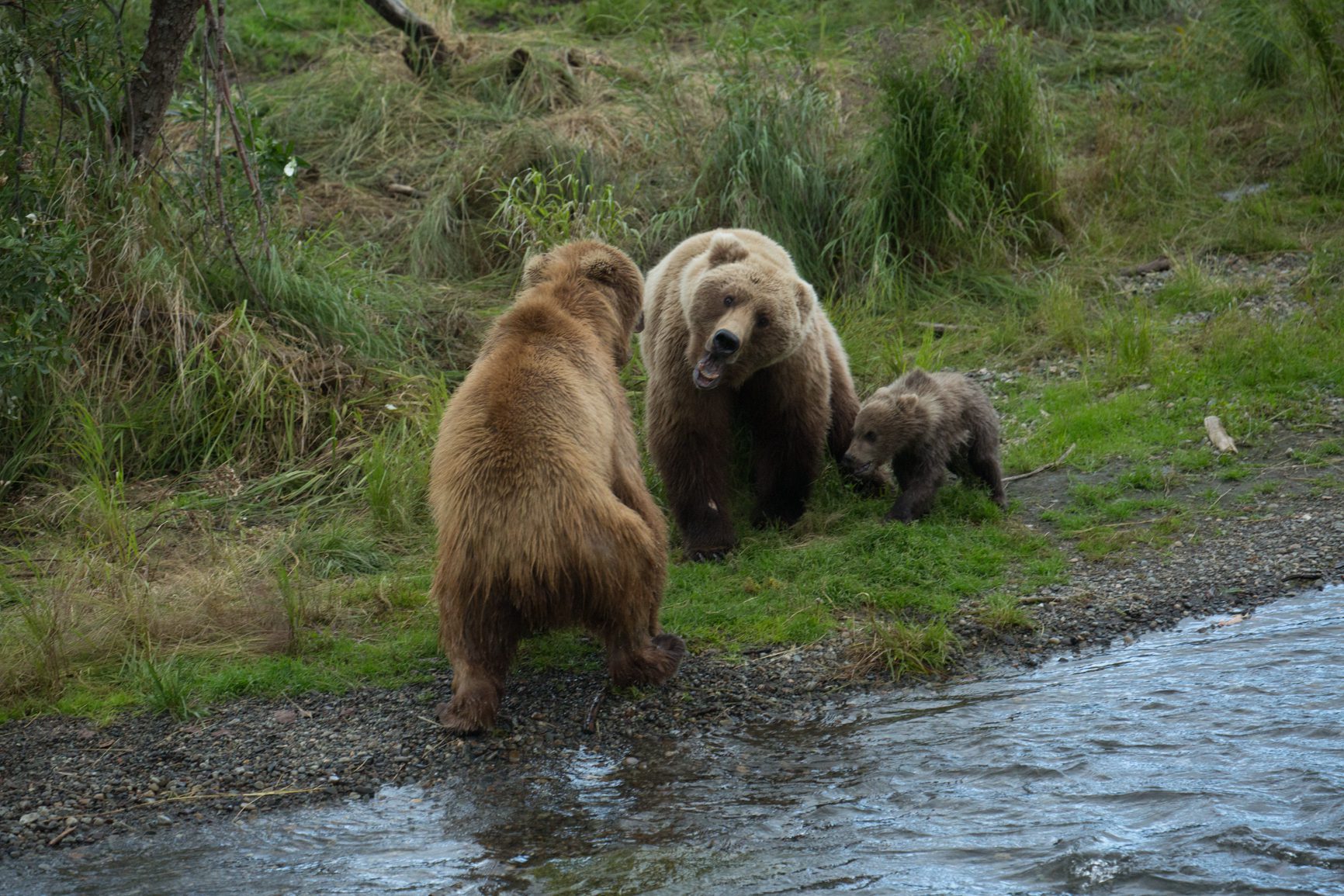 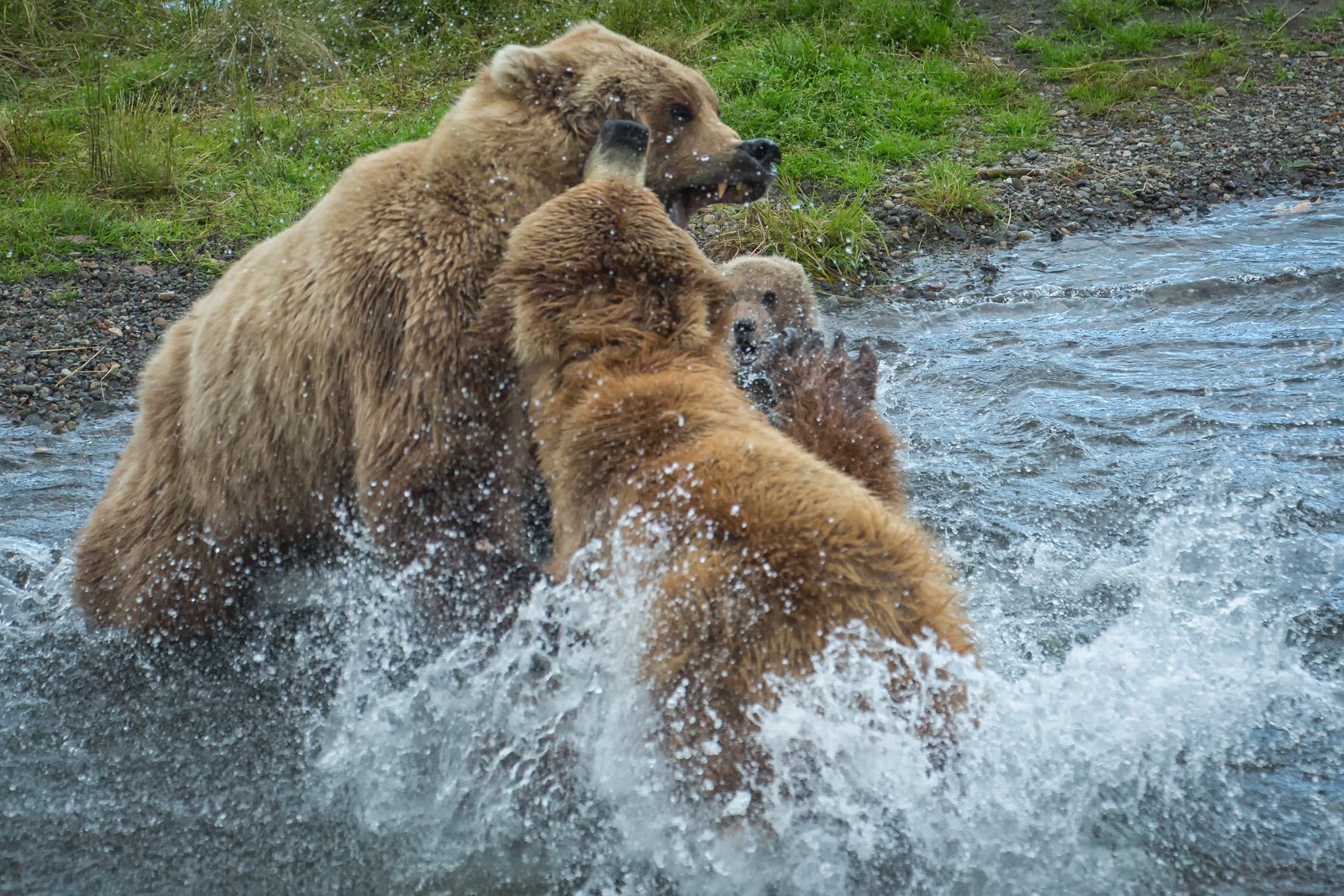 As the male bear attacks the little cub lets out a roar and swats at the male to help his mother. The attacking male is in the foreground. 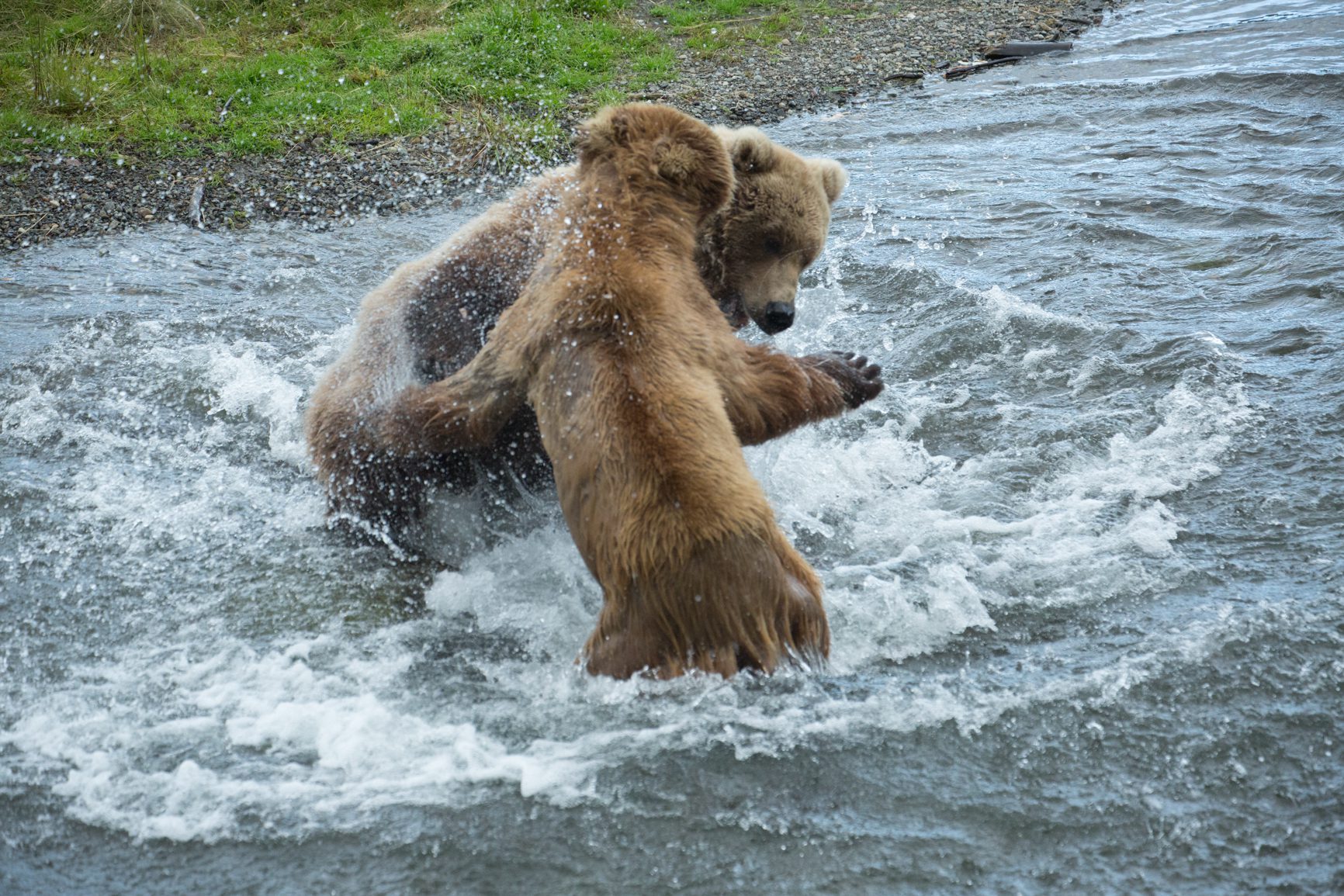 Mom shields the cub from the attacking male as the male bites into her neck. 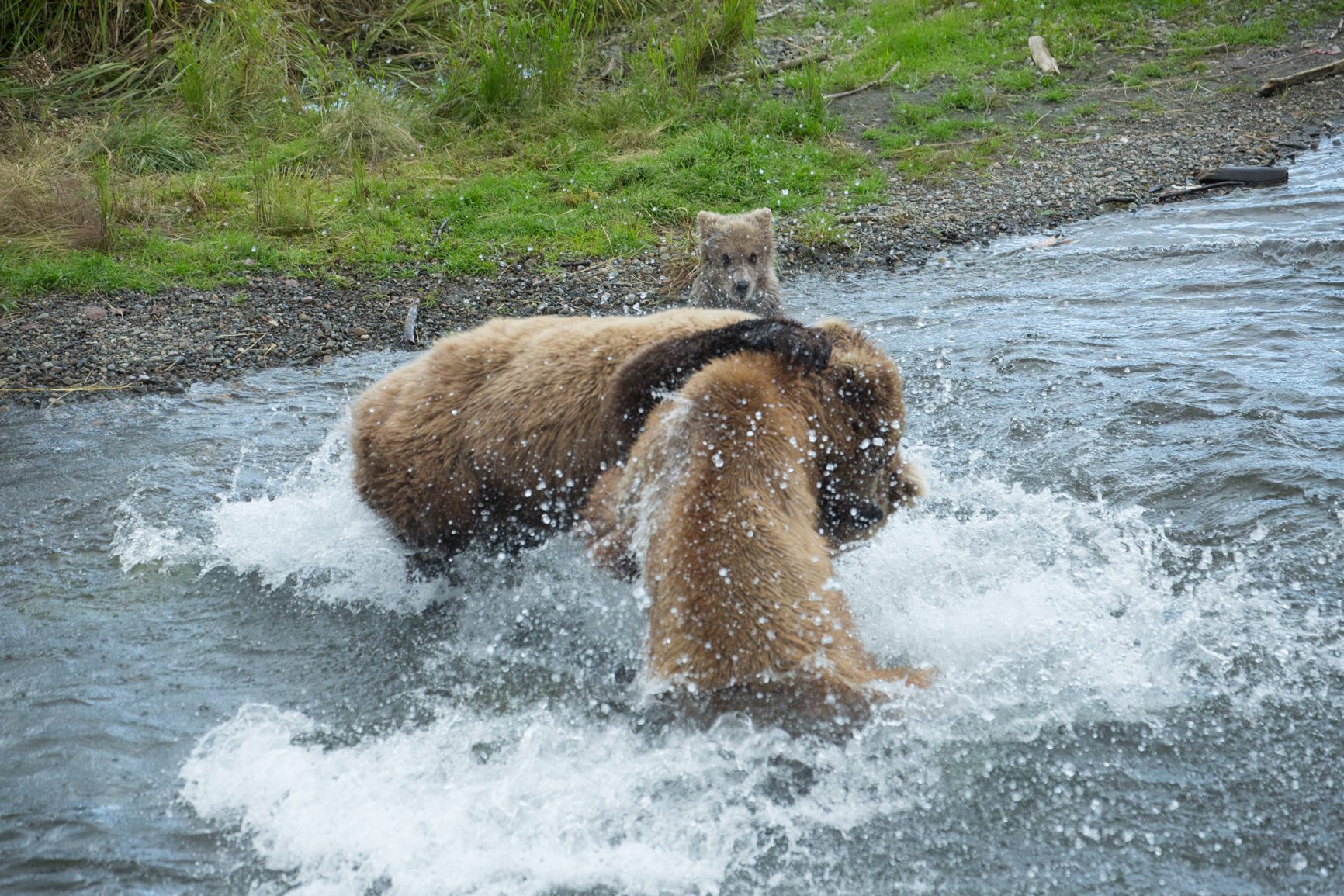 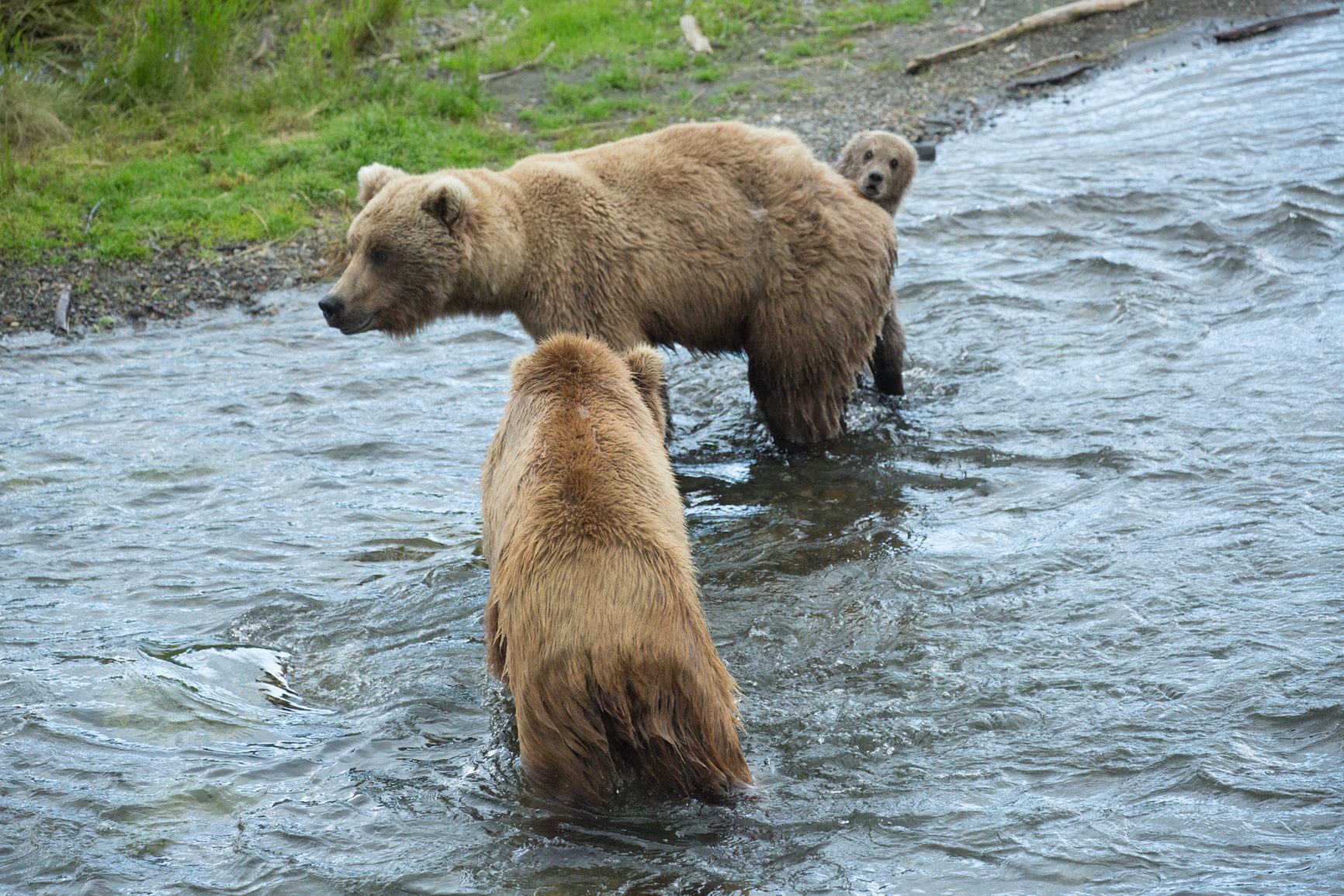 Mom and the spring cub were able to survive this time.  It was their second fight of the evening.  After this fight the petrified cub kept one paw on his mother as she made her way back out into the river to fish.  The little bear was justifiably frightened from all of the male bears in the area.  I was really hoping that Mom would head back downstream where all the other mothers and cubs fished, away from the males.  Instead she boldly waded back out into the river. 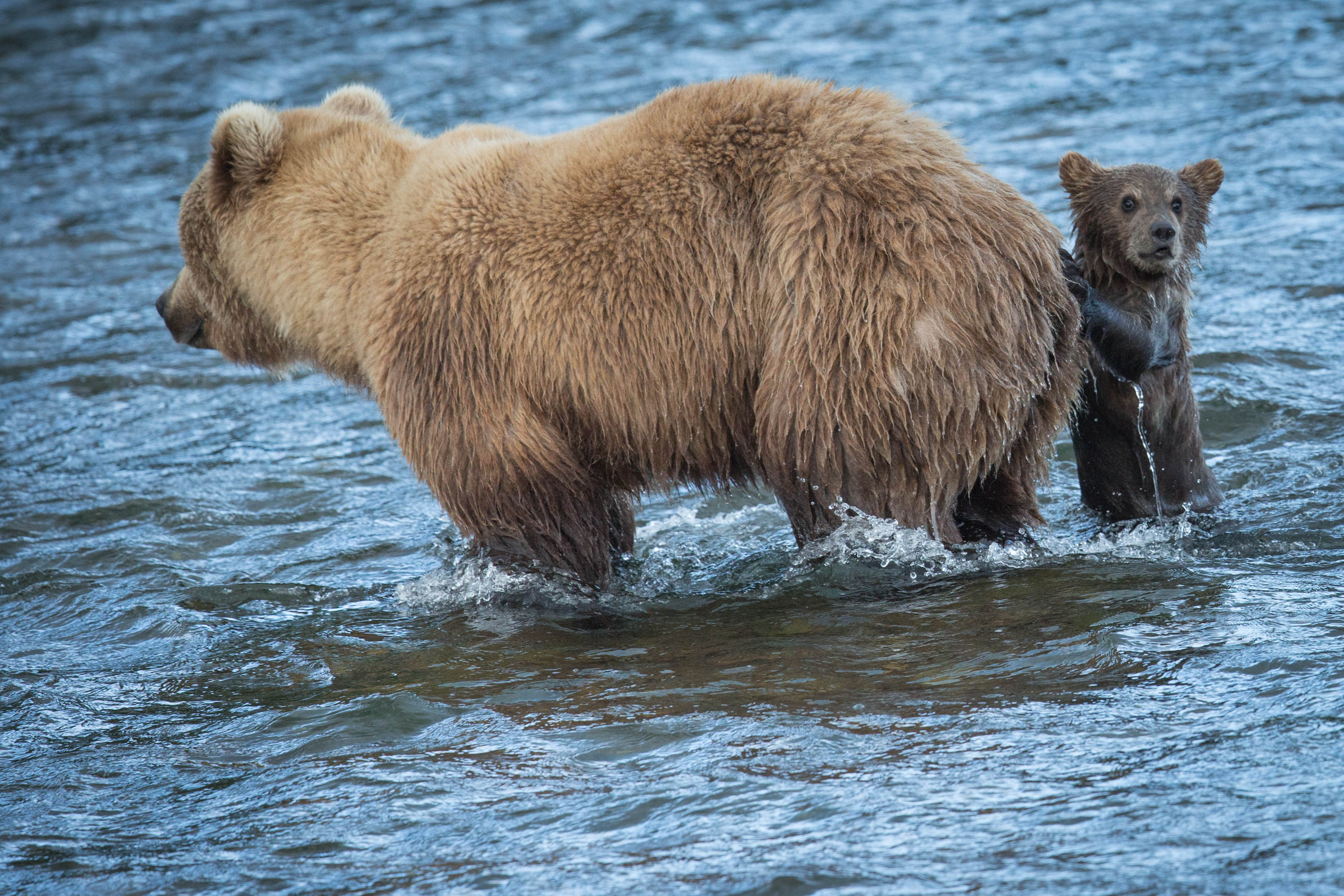 Mom returns to fishing amongst the male bears at the falls while the cub looks on with fear.

The mother fished while the cub hid underneath her.  I watched her fish for a couple of hours.  She was not having much luck though. The flow of salmon upstream was slow and the bears were grumpy.  Lots of fights broke out.  I left the river at 10 pm hoping the mother and her cub would survive the night. 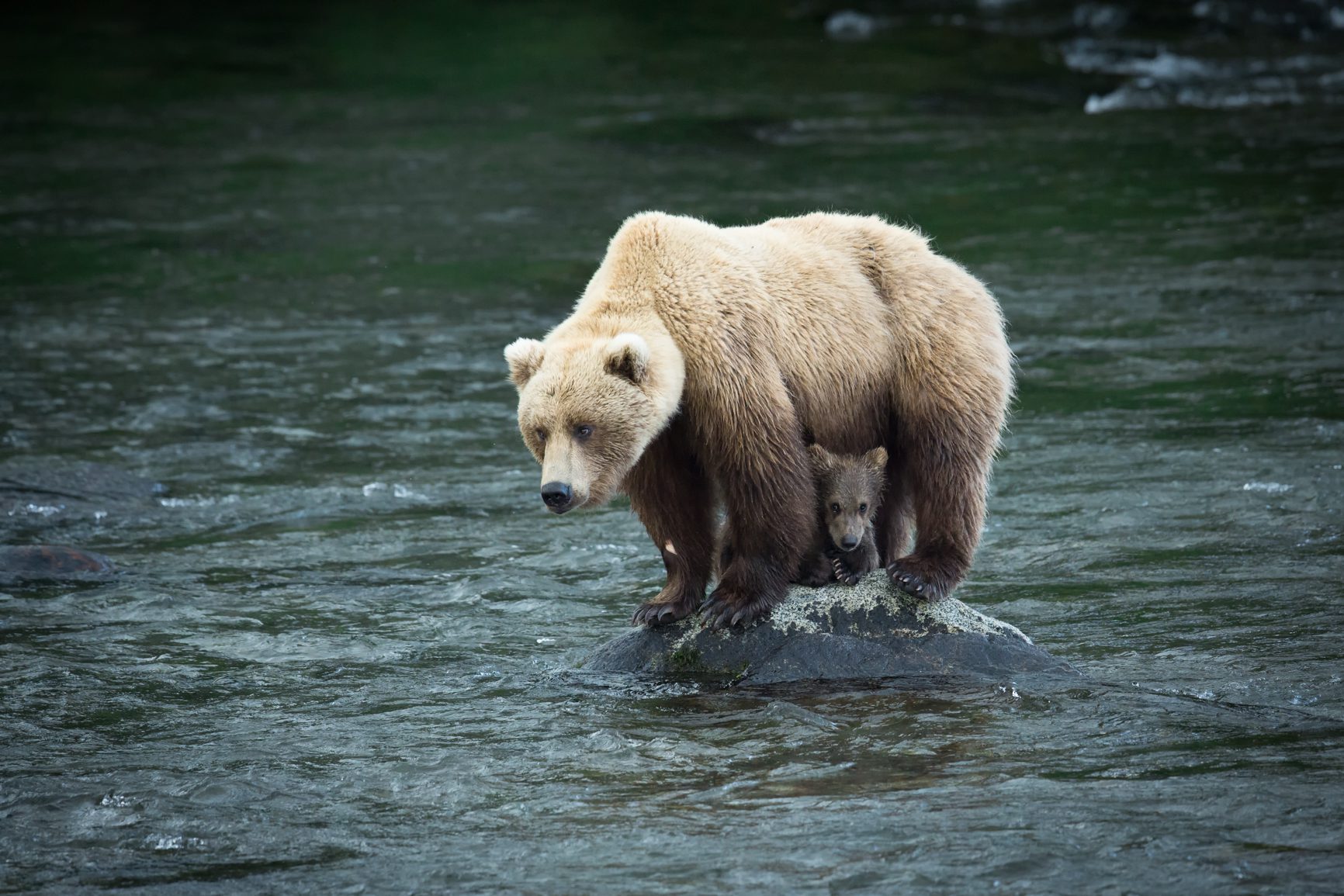 Mom fishes for salmon while her cub tries to remain invisible underneath her.

Early the next morning the mother bear and cub were back up in the same tree.  She probably had another attacking male encounter during the night, or perhaps she slept up there as a defensive measure.

Sometime during that night the flow of salmon increased and the bears stuffed themselves so much that many were sleeping with full bellies in the forest.  I hoped that the mother and cub were also able to feast on salmon.

About 50% of bear cubs die their first year.  The Grizzly Bear is not doing that well as a whole.  Loss of habitat as man encroaches into their wild lands is the biggest threat. Research shows that Grizzly Bears need a huge range of land that is not disturbed by man.  Hunting of female bears has been found to be another key threat to their survival. In some areas a loss of the remaining few females kills the local population forever. Grizzly Bear numbers are shrinking in the lower 48 states (Montana,Wyoming, Washington,and Idaho).  Development of new roads into forested areas is affecting these great bears in a negative way.

The more people can appreciate and respect the Grizzly Bear the better it will be for them, and for future generations of humans.  Fear of the bears though dominates peoples view of the Grizzly Bear.  The Grizzly Bear Study in Yellowstone describes the hunters who are afraid of the bears, and end up killing them in “self-defense” as “woods wimps”.  That has been my take.  I meet many wimps who have never seen a bear in the wild, and yet are armed to the hilt ready to kill the “ferocious killers”.   Hopefully more people will get to see these bears in the wild and learn how to be brave, and not hide their fear behind their guns. The next time a macho wanna be mountain man starts to spew about how he fought off a bear, or defended himself from an attack, call B.S. and ask for the facts and details.  Yes, there have been attacks by bears, but mosquitoes are way more deadly to humans.  I used to bring a bear rifle into the wilds of Alaska with me. Now I am fine with bear spray, knowledge, and respect of the bears space.

Read more about these great bears: 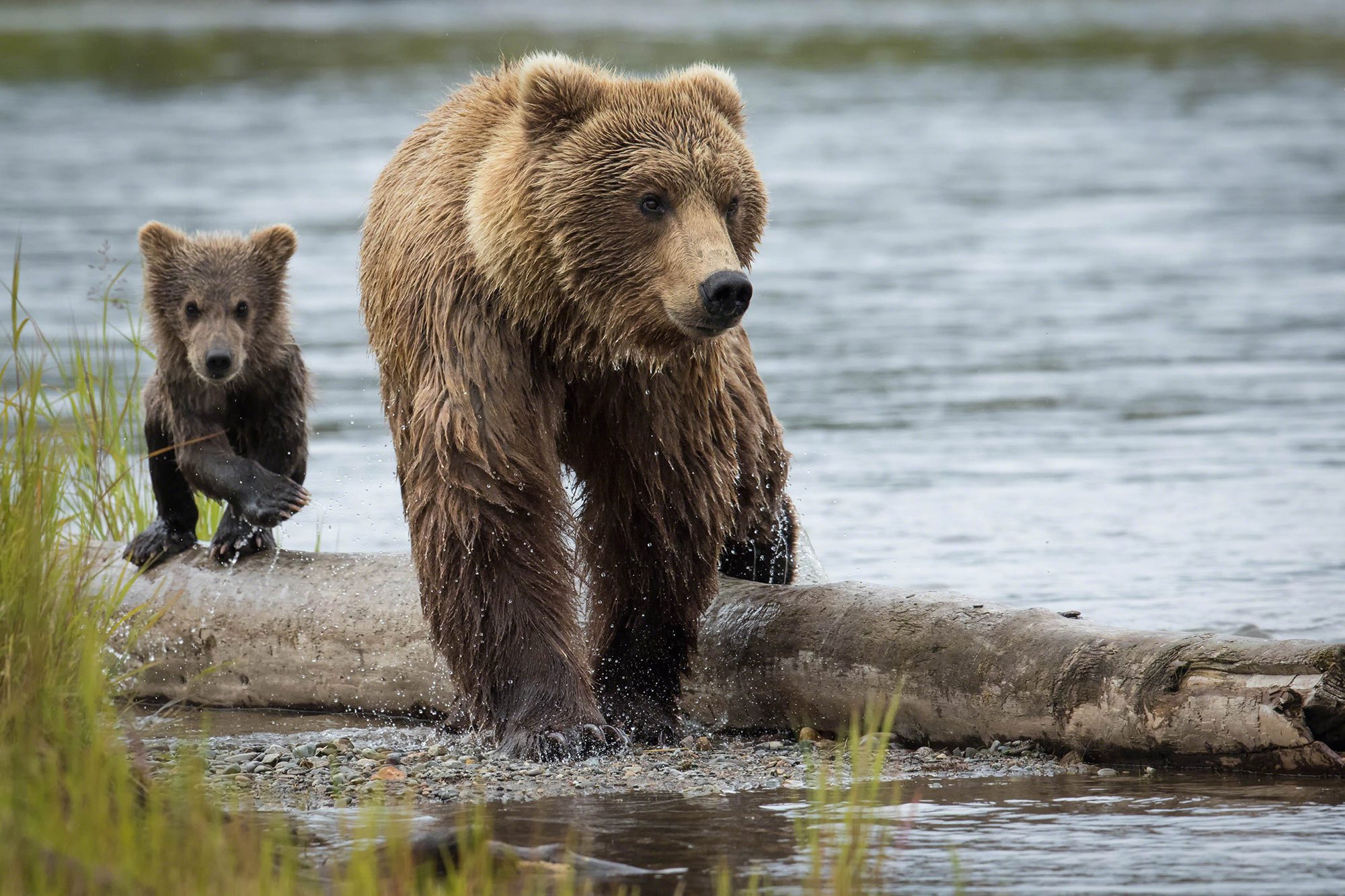 © 2015 Ed MacKerrow/In Light of Nature. All Rights Reserved. All images are protected by International Copyright Law, do not use, print, reproduce or download my images without my expressed written permission.