The Sights and Sounds of Summer in the Bosque del Apache 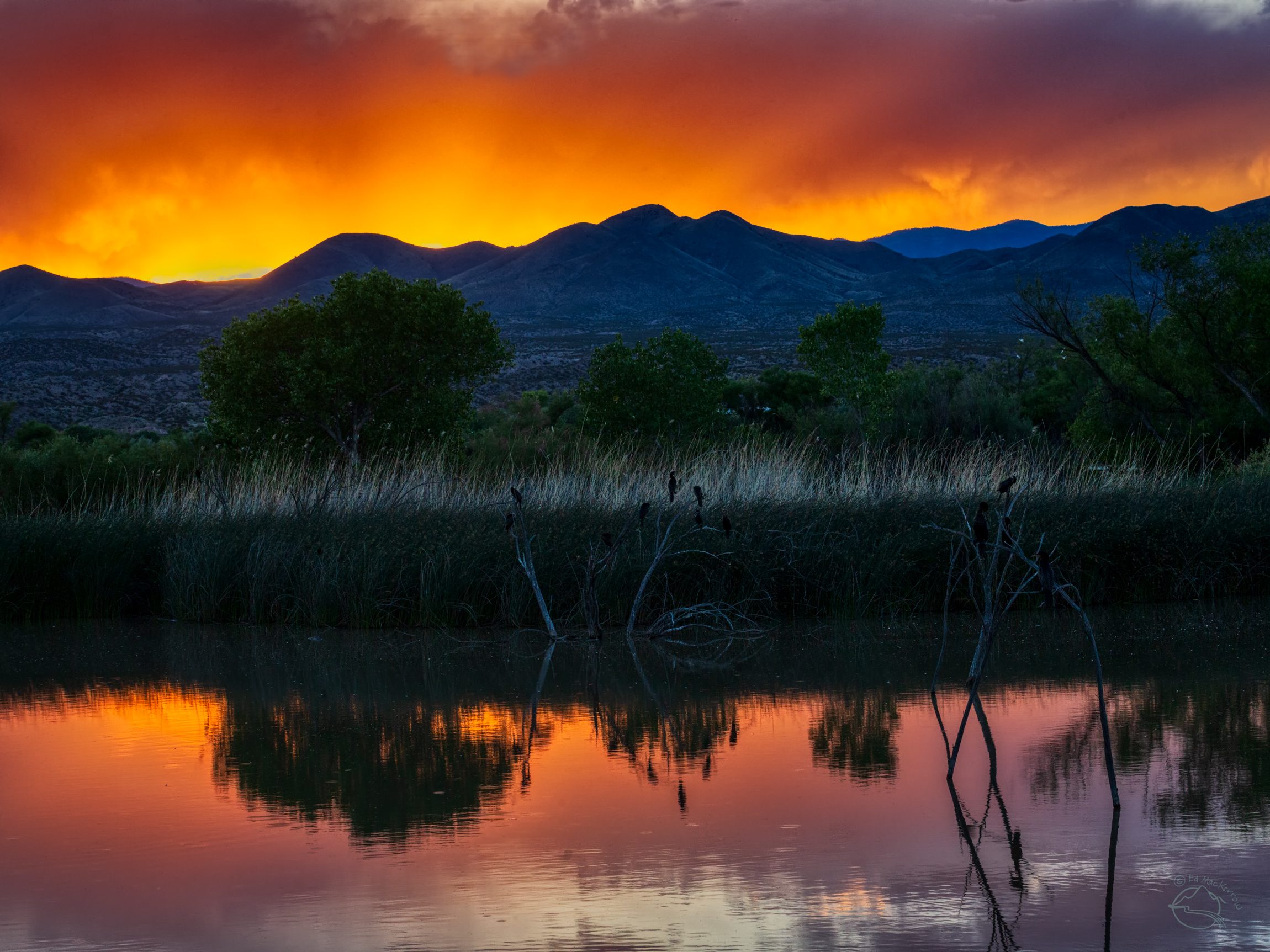 The Bosque del Apache serving up its signature dish, still reflective water, underlit clouds at sunset, with wildlife in the scenery.

An Explosion of Life and Light

I am always promoting the stunning light and amazing scenery at the Bosque del Apache National Wildlife Refuge, in all seasons.  It is true!  Any month of the year the refuge is a nature photographer’s dream.

Recently I had to drive by the Bosque del Apache after some field research on owls in South-Central New Mexico.  My timing was right for some sunset photography.  It had been way too long since I last visited the refuge, and now was a golden opportunity for me to experience its beauty.  Besides, I needed a break after being up all night high in the mountains recording owls. 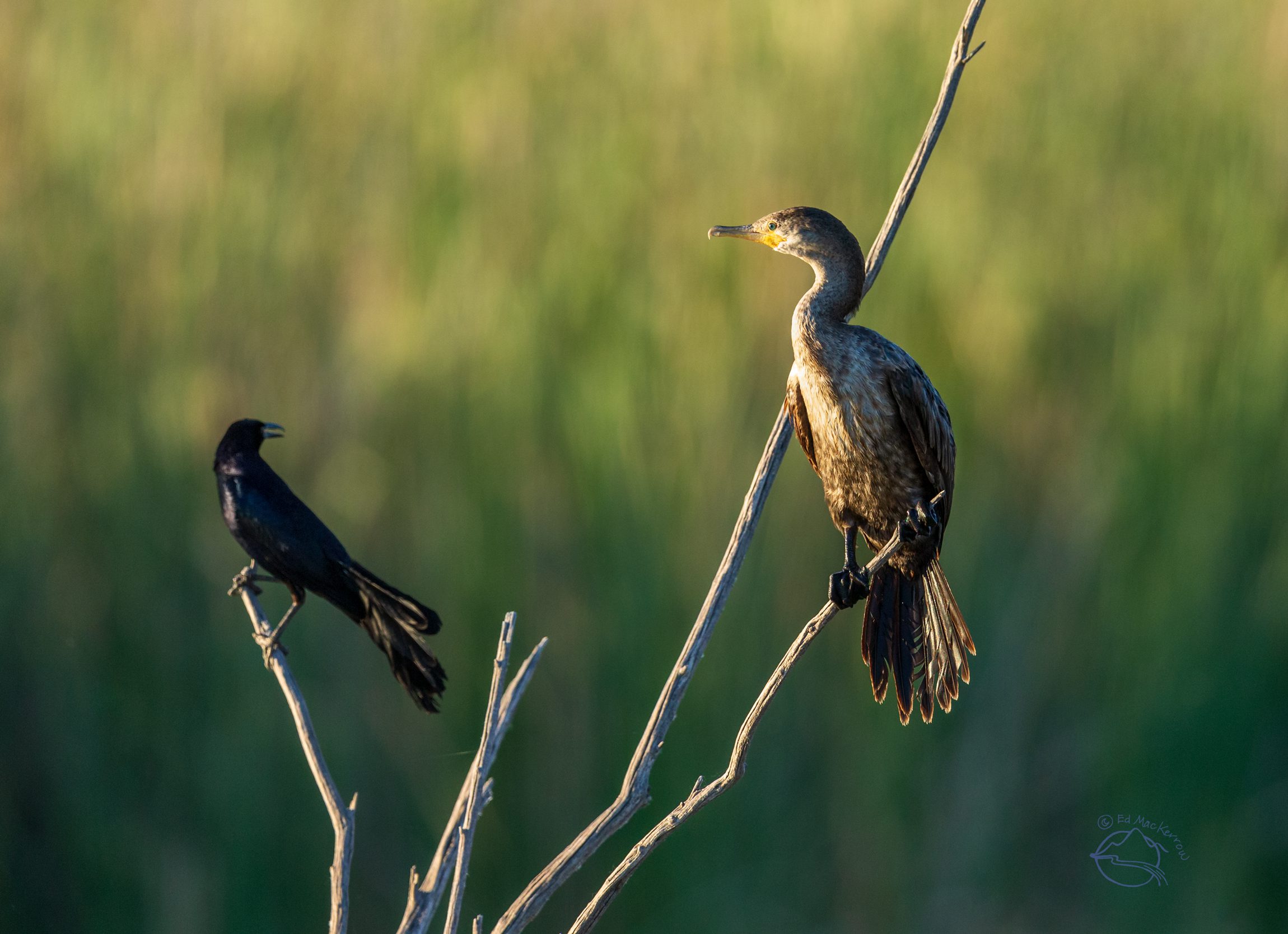 As I entered the refuge I was expecting to have it all to my self.  In previous summer visits, this was often the case.  Who else would be crazy enough to visit the refuge in the heat and all the bugs?

Drats, there were two other cars that I encountered right away.  I pulled over to get my act together.  At the refuge, I want to be ready.  If a bobcat, or mountain lion, appeared while my camera was not set up, I would never forgive myself.

Now, “armed” with my cameras I was ready to explore this amazing place.  I left the windows of my truck rolled down so I could quickly photograph any elusive cats that might appear.  Oh yes, now I remember… those damn mosquitoes!  As my truck filled up with mosquitoes the bloodsuckers began biting my neck, hands, and arms.

I regrouped again.  The light was just starting to get good too.  The mosquitoes were serious — a thousand times worse than my worst bug days in Alaska.

Ok, now with a long-sleeved shirt, dosed in citronella, a mosquito net over my head, and gloves I was ready.  Driving with a bug net on, while the interior of my truck was one thick cloud of mosquitoes was starting to verge on the ridiculous.  Those mosquito head nets are also not my thing either. 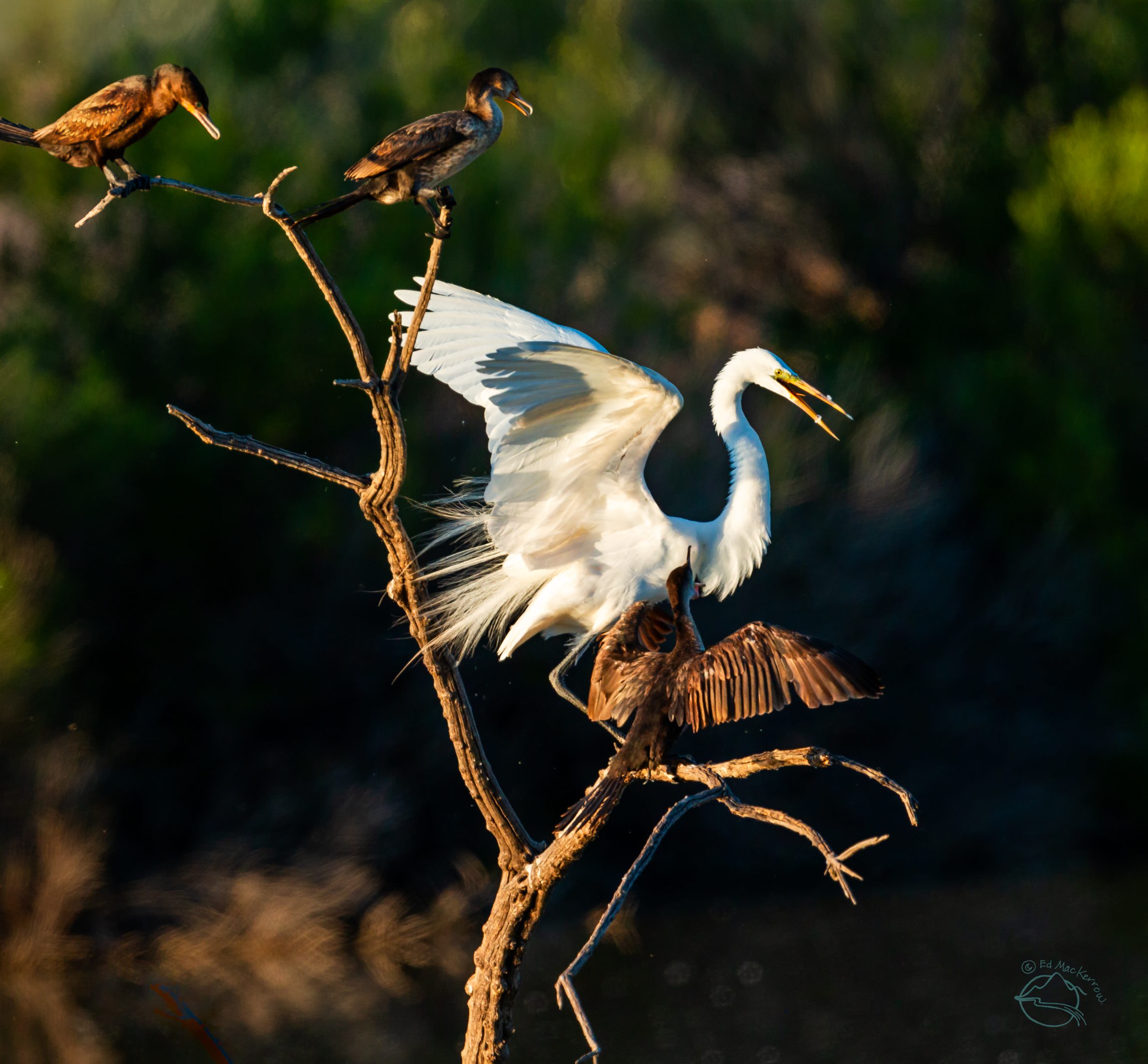 Birds in balance, a Great Egret offsets Double-Crested Commorants, any movement by one of the birds caused the others to carefully adjust their perch

This is not working…the bugs are now so thick that the inside of my windshield is covered with them, I am too tall to wear a hat with a mosquito hat in my truck.

Even though the temperatures are in the nineties I decided to go with my Alaskan bug avoidance technique.  That is to bundle up with thick clothing including wearing a jacket with a hood and cover my face with a Buff or bandana.

Even though the refuge was basically void of other people one of the other vehicles decided to follow me.  When I am at the refuge I like to take my time and not feel rushed, always looking in the rear view mirror concerned about people behind me. So, I pulled over again and stopped waiting for the follower to move on.  This is getting to be one of my most inefficient trips to the refuge…

Finally, I was alone.  I am actually quite an extrovert, although at this point I must sound like I have antisocial tendencies.  When I am out photographing nature I like to get into the “zone”, where I can listen, watch, and be in tune with nature.  I think this helps to get the best nature photographs.  When other people are present, it is hard to get in that zone. 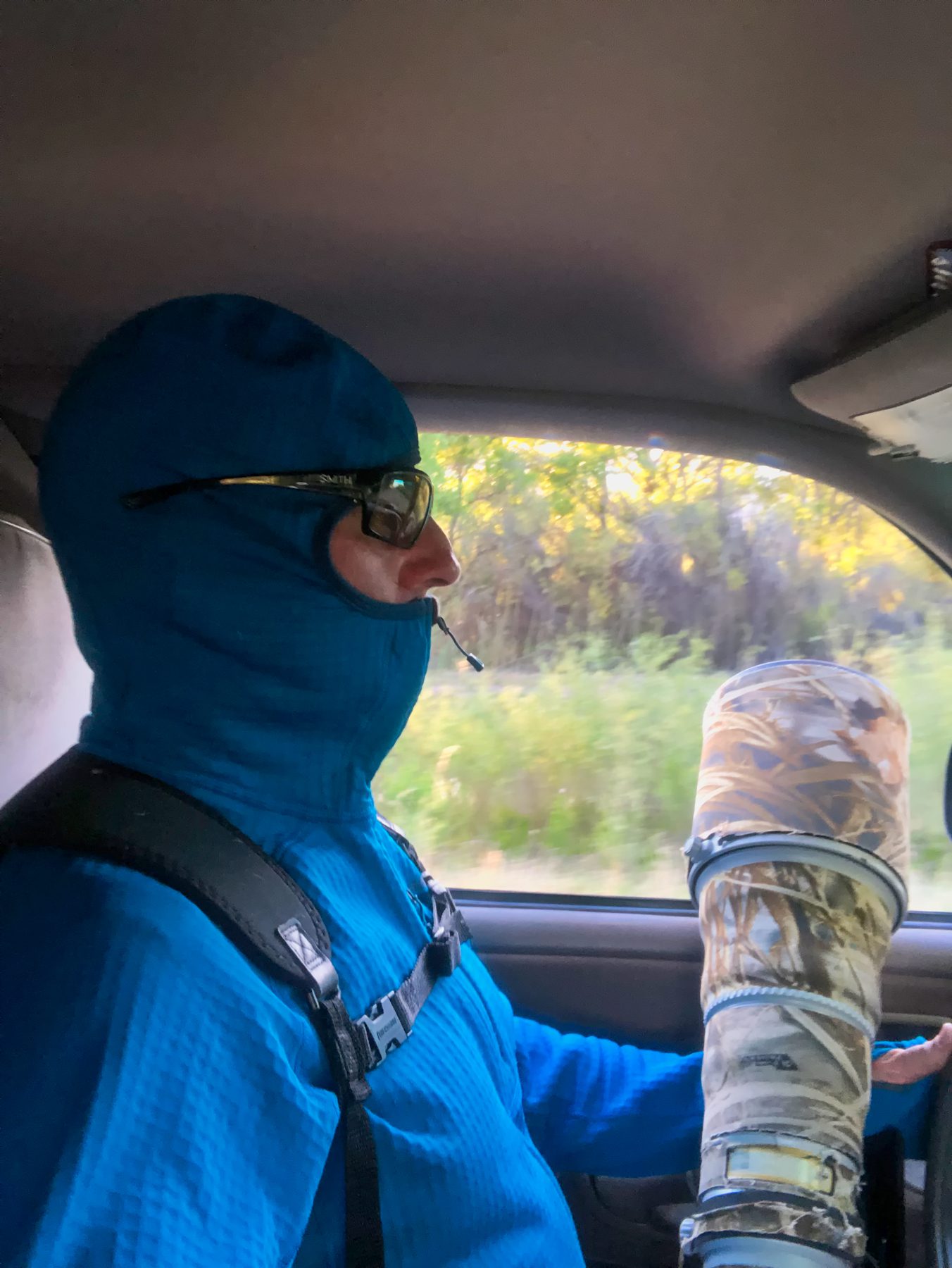 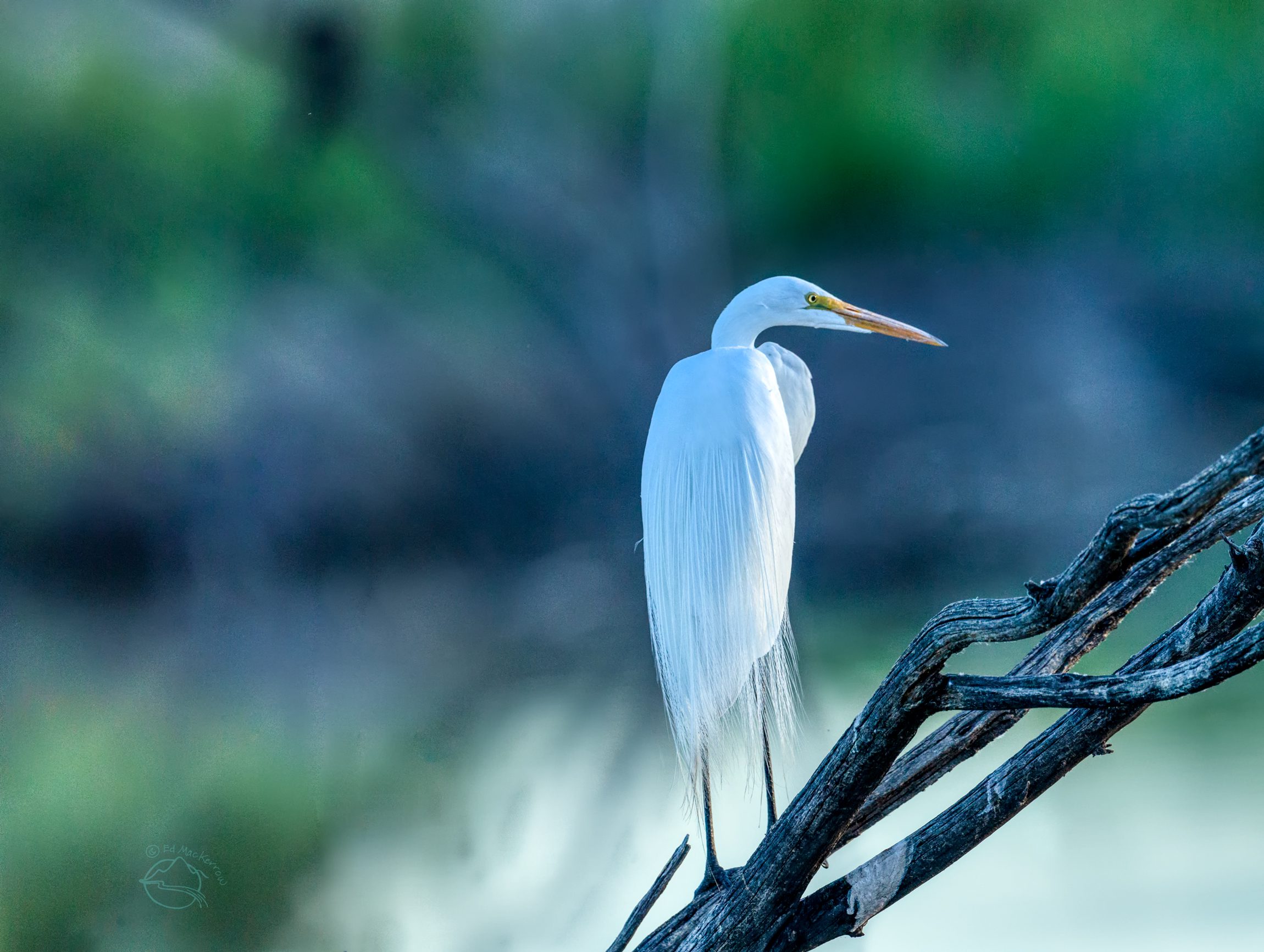 A Great Egret perched in the soft pastel afternoon light.

By now the sun was setting over the mountains west of Socorro and the light was going to be awesome.  No wind means the water reflects the color of the sky.  If the sun can illuminate the underside of clouds as it sets in the west, the colors will be intense.  The long path length the sun’s rays travel through the clear, dry air of the New Mexico, optimizes the amount of Rayleigh Scattering. 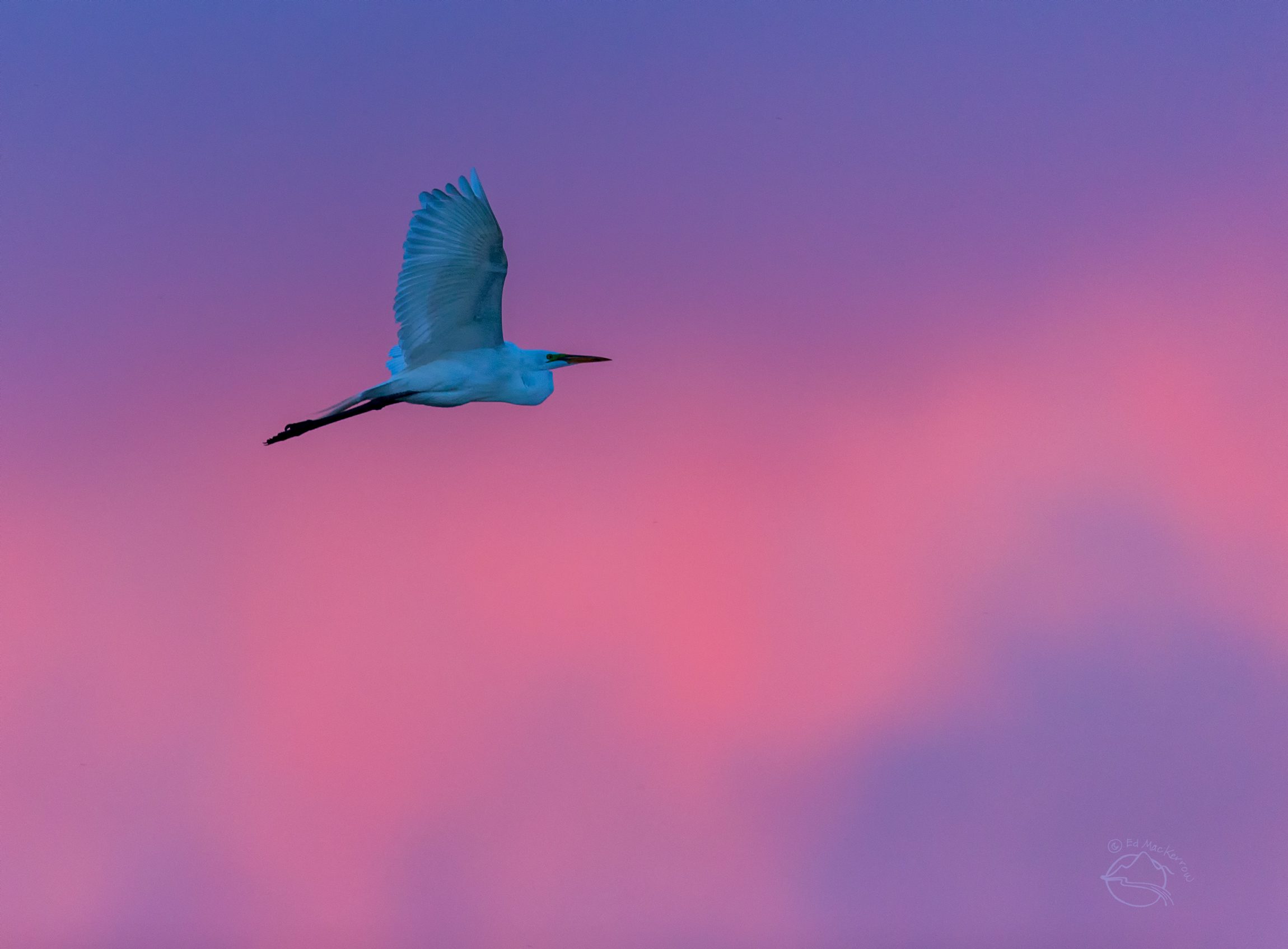 Great Egret heading to roost for the night under a colorful New Mexico sky (real colors!)

This type of scattering is more efficient at scattering the shorter wavelengths (blue).  After the long pathlength through the atmosphere when the sun is low, most of the blue light is scattered away from us leaving warmer, reds and oranges.   If the reddened light illuminates a cloud, especially the undersides, we see the bright reds and oranges in the sky.  When there is a body of still water it acts like a mirror reflecting red light from the distant clouds back to our eye.

Finally, I was where I wanted to be.  Alone, at a pond reflecting bright red and orange light, while egrets, cormorants, and grackles flew in to roost for the night. 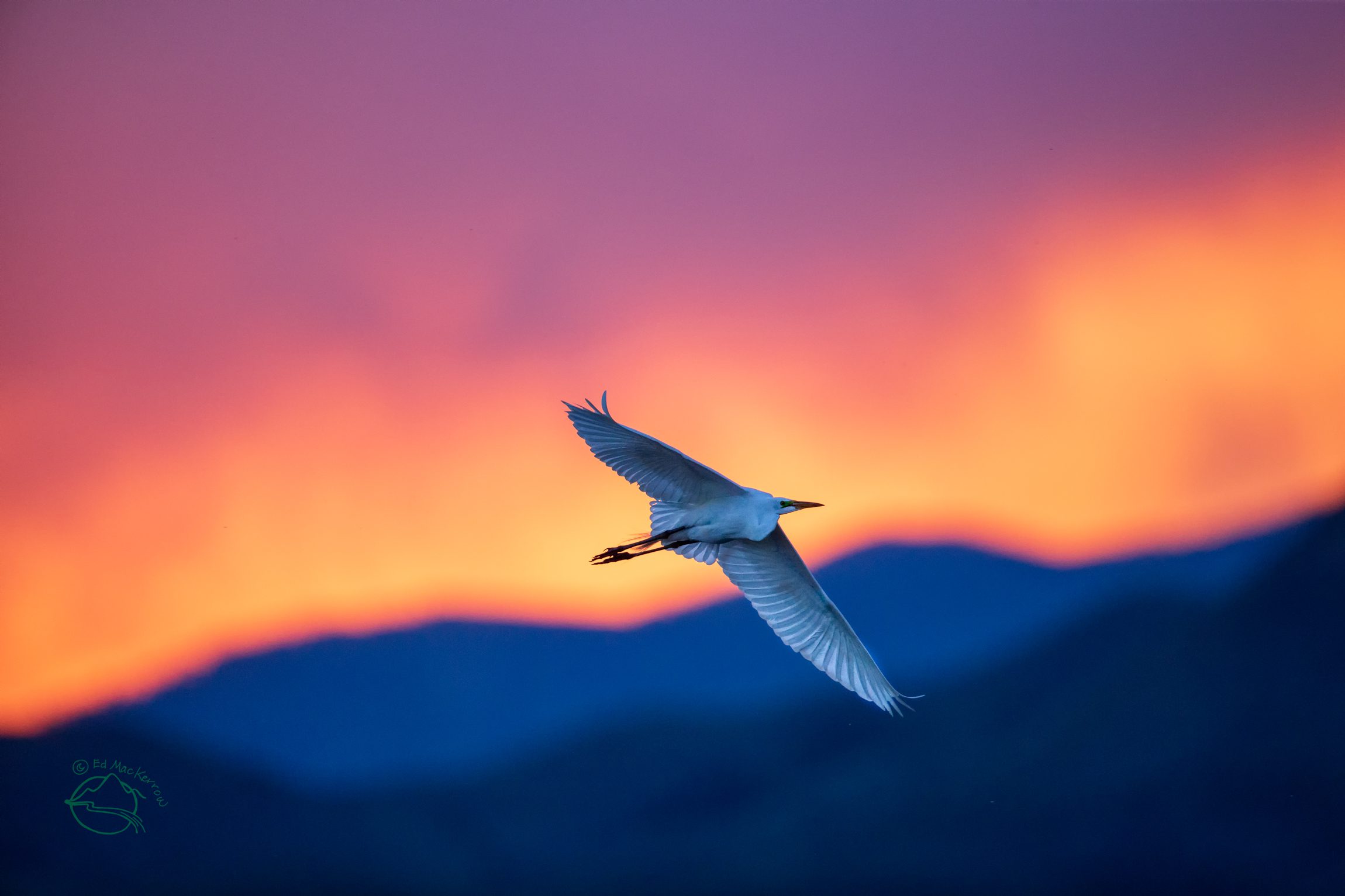 The colors in the sky usually grow redder and saturated well after sunset.  Hang out an extra 20 minutes and you will be rewarded (real colors!). Great Egret coming in for the night roost.

Not only was the intense light amazing, but the sounds from the birds and frogs in the pond complimented the light show.  I stood next to my tripod in awe of the life force in front of me.  Nighthawks filled their bellies with insects as they swooped back and forth above me through the clouds of insects. Bullfrogs croaked, grackles whistled, and other critters made sounds I could not identify.

Using a very fancy wildlife microphone I recorded the sounds of the pond at sunset.  These sounds are not just random noises, instead, they are used by the birds, and frogs, to communicate with each other.  Pondering how an individual can filter out all the unimportant noises to listen for their mate is mind-blowing.

Listen to the recording below to hear all the life in this pond! 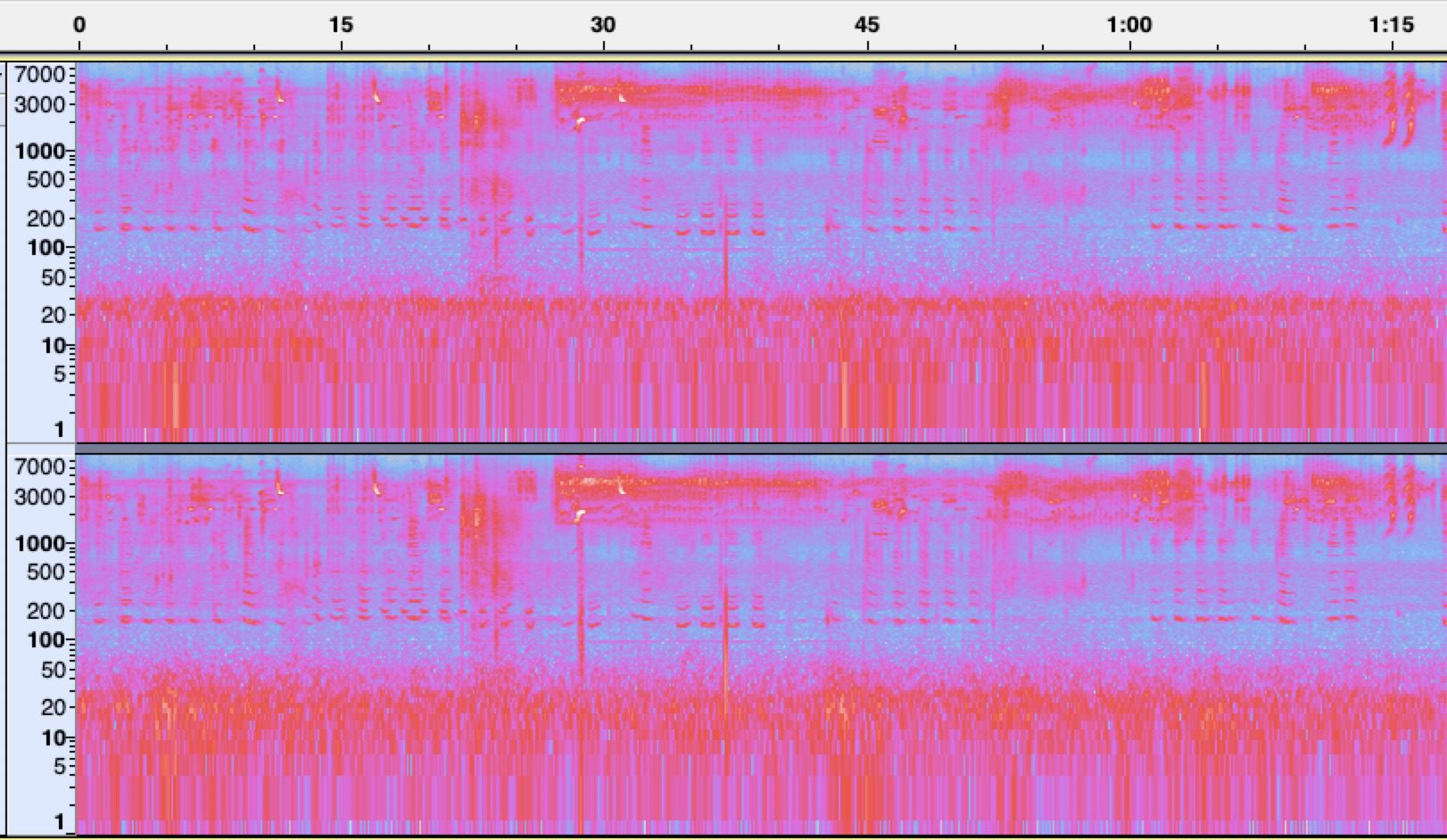 Spectogram of an audio recording (below) of a pond at the Bosque del Apache.  Bullfrogs, Red-winged blackbirds, Great-tailed Grackles, Great Egrets, Double-crested Cormorants, and all kinds of other creatures can be heard.  The vertical axis is the frequency and the horizontal axis is time.  The different waveforms (horizontal bands) around a given frequency correspond with a specific bird or frog species. 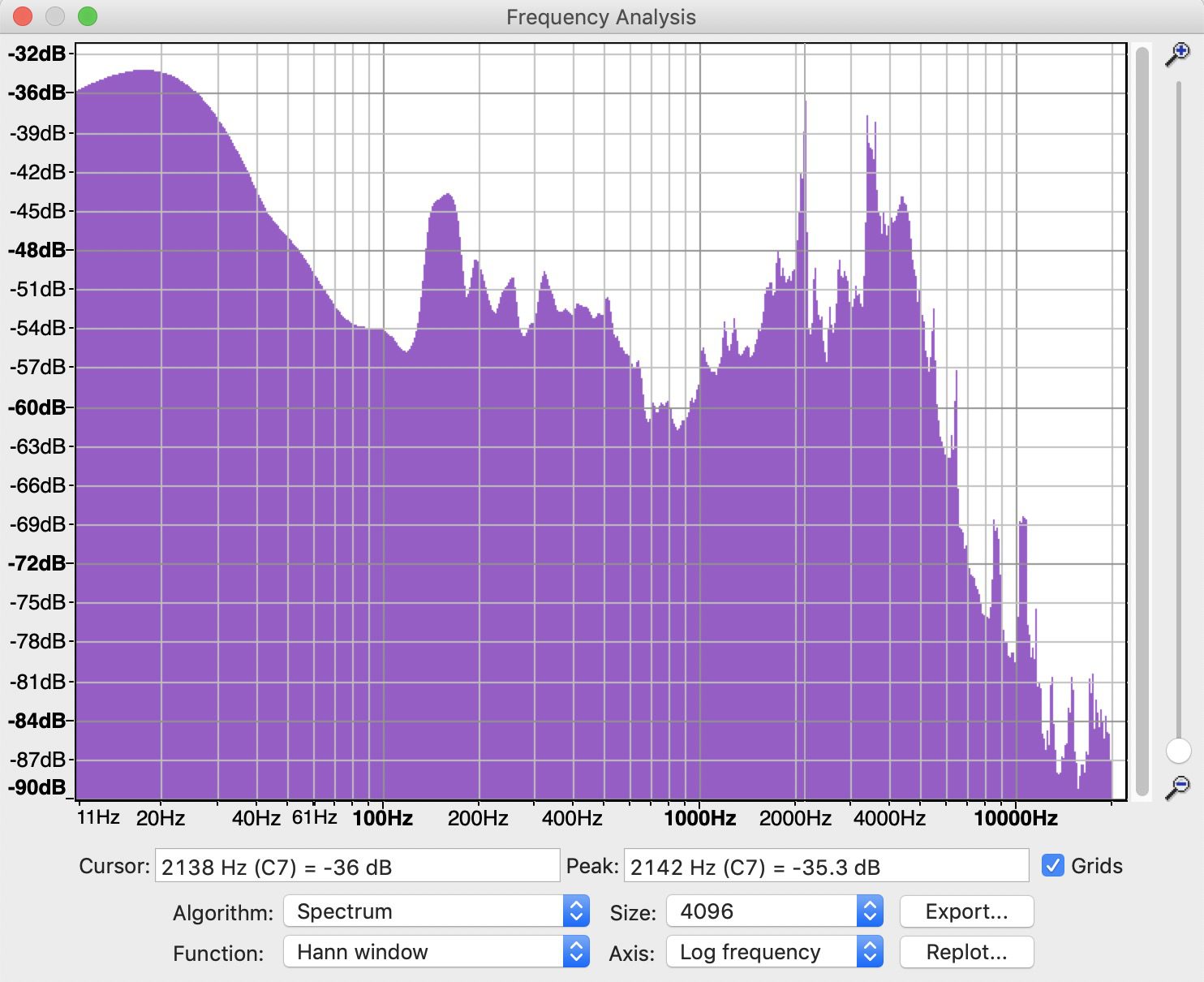 The frequency spectrum of the audio from the pond show various spikes, corresponding to different species of birds, or frogs vocalizing.  The vertical axis is the volume (decibels) and the horizontal axis is the frequency (Hertz).

I could feel the ground temperature equilibrate with the air temperature.  This occurs twice per day and lasts only about 10 minutes. During this time the air is calm and still.  Atmospheric turbulence is at a minimum during this time and helps improve image quality and the camera’s focusing ability.

Surprisingly I only suffered a few mosquito bites.  When the light show faded, I began my drive home, stopping at a car wash to clean off the layers of bugs so I could see out my windows.

Now, in the cool New Mexico night air, with my windows rolled down, I relaxed as I watched twilight turn to a star-filled sky.  Thanking “Betsy”, my reliable old Toyota Tundra with 350K miles on her, for getting me there and back.  Betsy has traveled thousands of miles of rough dirt roads and I told her that I would replace her suspension soon.  I felt a bit nervous on the four-wheel drive roads driving up into the high mountains!

When I arrived at home north of Santa Fe the night air was cold and I could see the snowy peaks behind my house glowing in the darkness.

Ahh, I safely home from another rewarding experience in the Land of Enchantment.  As I fell asleep I could still hear the rhythmic sounds of the Mexican Whip-poor-wills from the dark forest. 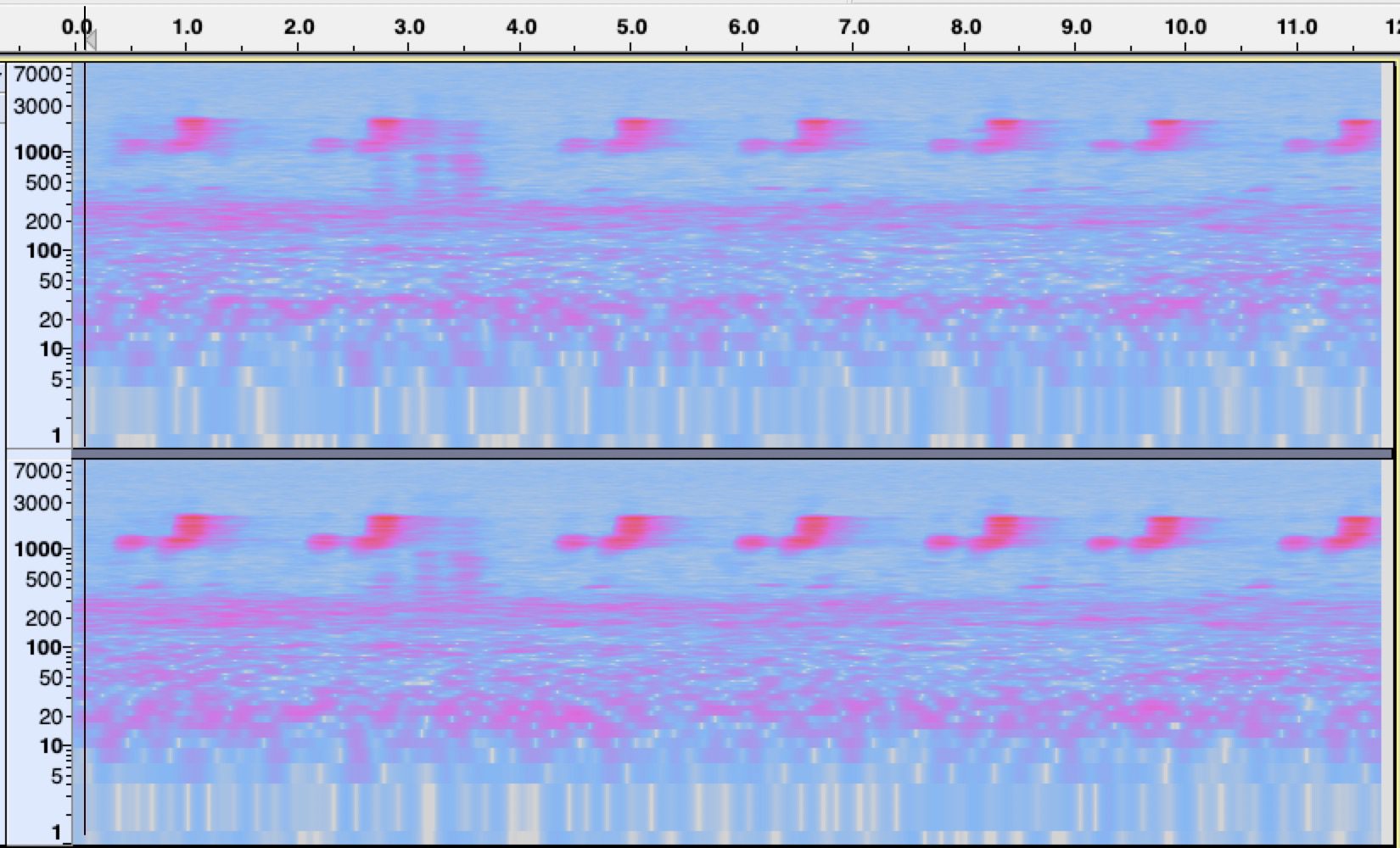 Spectogram of an audio recording (below) of a Mexican Whip-poor-will in some high mountains (undisclosed location) of New Mexico.  You can see the “chirps” of the whip-poor-will where the frequency suddenly increases at the end of each note. I never was able to see any of the Mexican Whip-Poor-Wills.  You can see what they look like here.  Note that you can hear an owl in the background of this audio.  I will leave it as a puzzle for you to figure out what kind of owl can be heard (faintly) — please leave your answer in the comments.

Visiting the Bosque del Apache NWR in the Summer 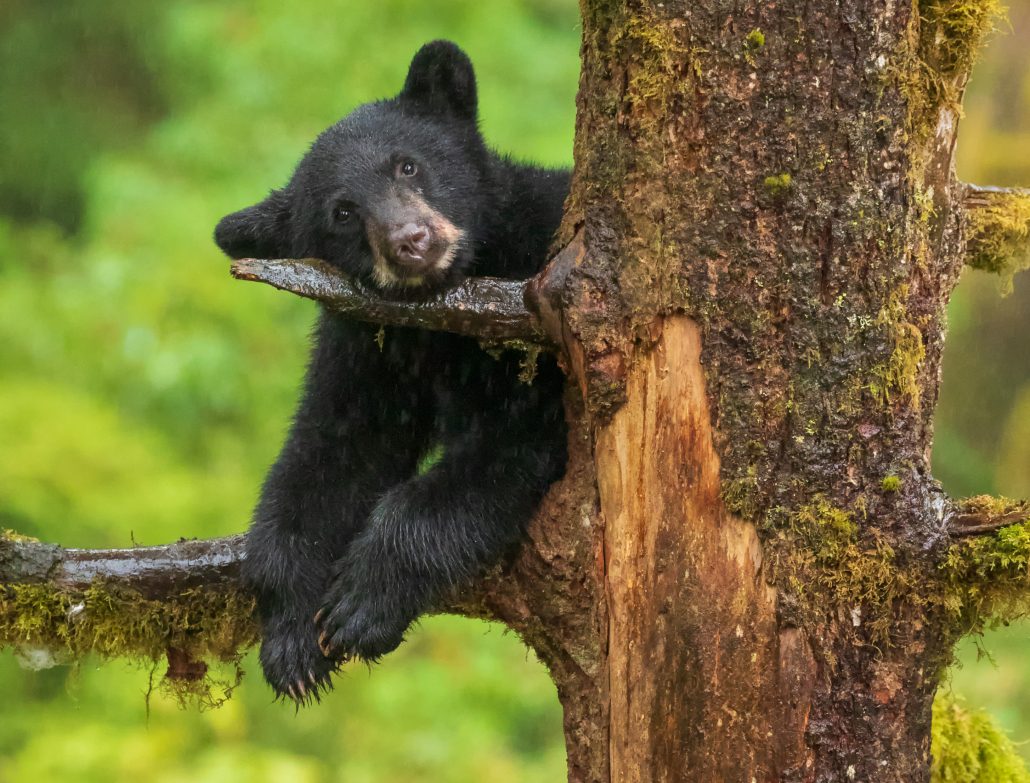