Infanticide: An Ugly Side of Nature

Bears are beautiful to me.   I spend a lot of time around them and enjoy learning about them by watching their behavior and studying research on bears.  Over time my attitude towards bears has moved from fear of them to respect of them.  This is especially true for mother bears.  Mother bears perform all the work (birthing, feeding, protection of their cubs, and hibernating with their cubs).  Male bears search for females to mate with, eat, sleep, hibernate alone, and fight with other bears.  Witnessing infanticide of a bear cub was a behavior I wished never to see.

Adult bears are also known to kill bear cubs, including cubs from the female they impregnated. This uglier side of nature, infanticide, the killing of baby bears by an adult (usually male) bear, is something I never wished to witness.  In past years at Katmai National Park, I watched a couple of close calls where an adult tried to kill a cub.

Well, infanticide does indeed exist in nature and this past July I, unfortunately, witnessed a large male bear kill a cub, and then brutally attack the mother of the cub when she tried to intervene.  Infanticide does end up with the mother also being killed in some cases.

Why Do Adult Bears Kill Cubs?

There is no one simple answer to this tough question.  Research and observations currently consider three motivations for this behavior.

Infanticide occurs with bears, bobcats, mountain lions, and other mammals.

Knowing about something is much different than experiencing it up close and personal, 20 feet away!

This article tells my experience photographing a mother bear, referred to by NPS rangers at Katmai NP as “Bear 132“, and her two spring cubs (born earlier in 2018). 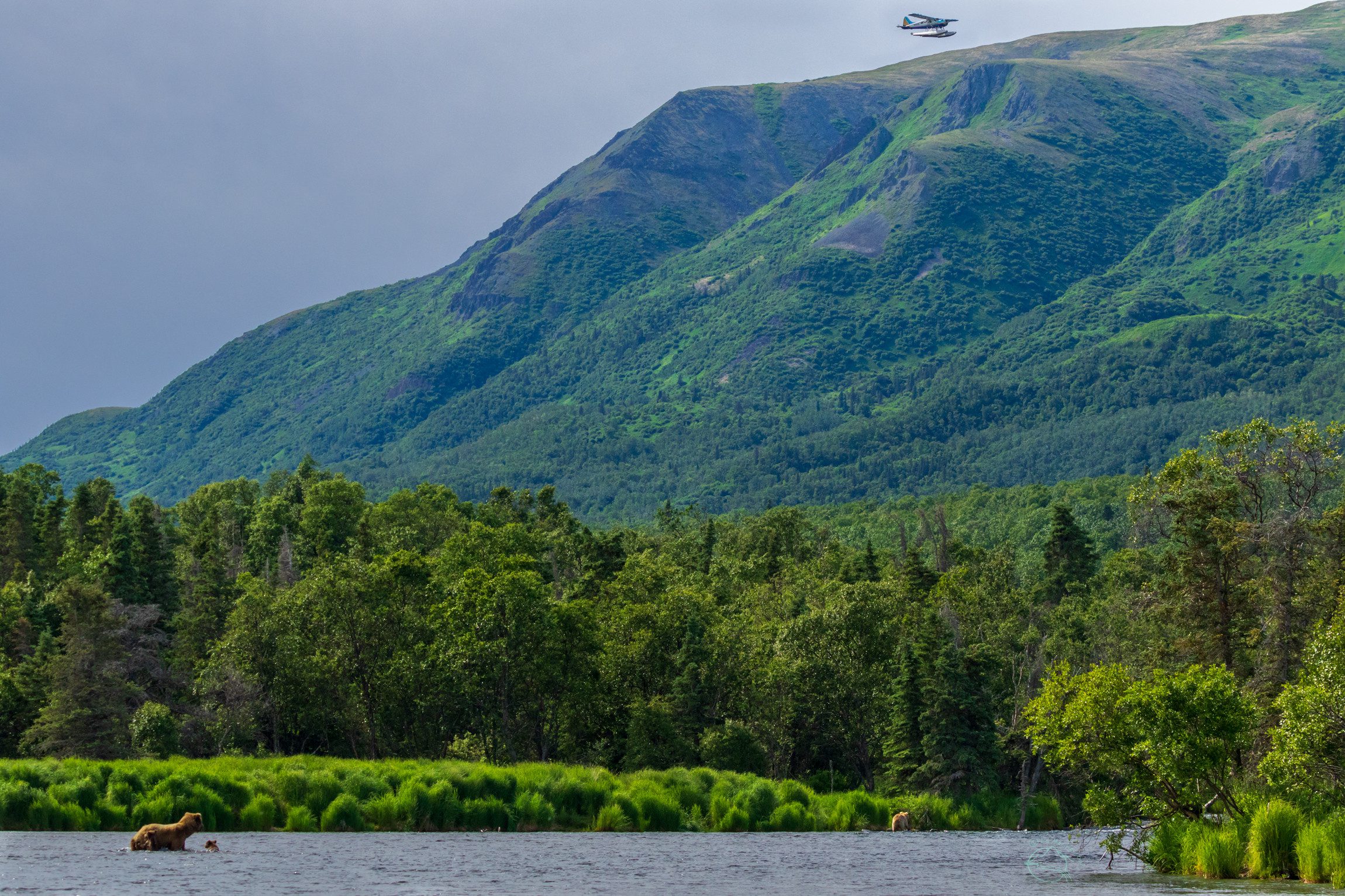 Just another beautiful day in July on the Brooks River.  Bear 132 and her cubs in a fairly safe area downstream of the falls, floatplane over Dumpling Mountain.

The event was disturbing.  I will not show many of the photos or video I took of the event.

If you choose to read more below, please realize that I have tried to minimize the graphic photos.

Finally, after prolonged rain and grayness, some sunlight made for a great day of photography.  One of the highlights that day, July 3, 2018,  was watching Bear 132 fishing in the Brooks River with her two spring cubs.  She and her cubs were alert to and careful around other bears in the area. 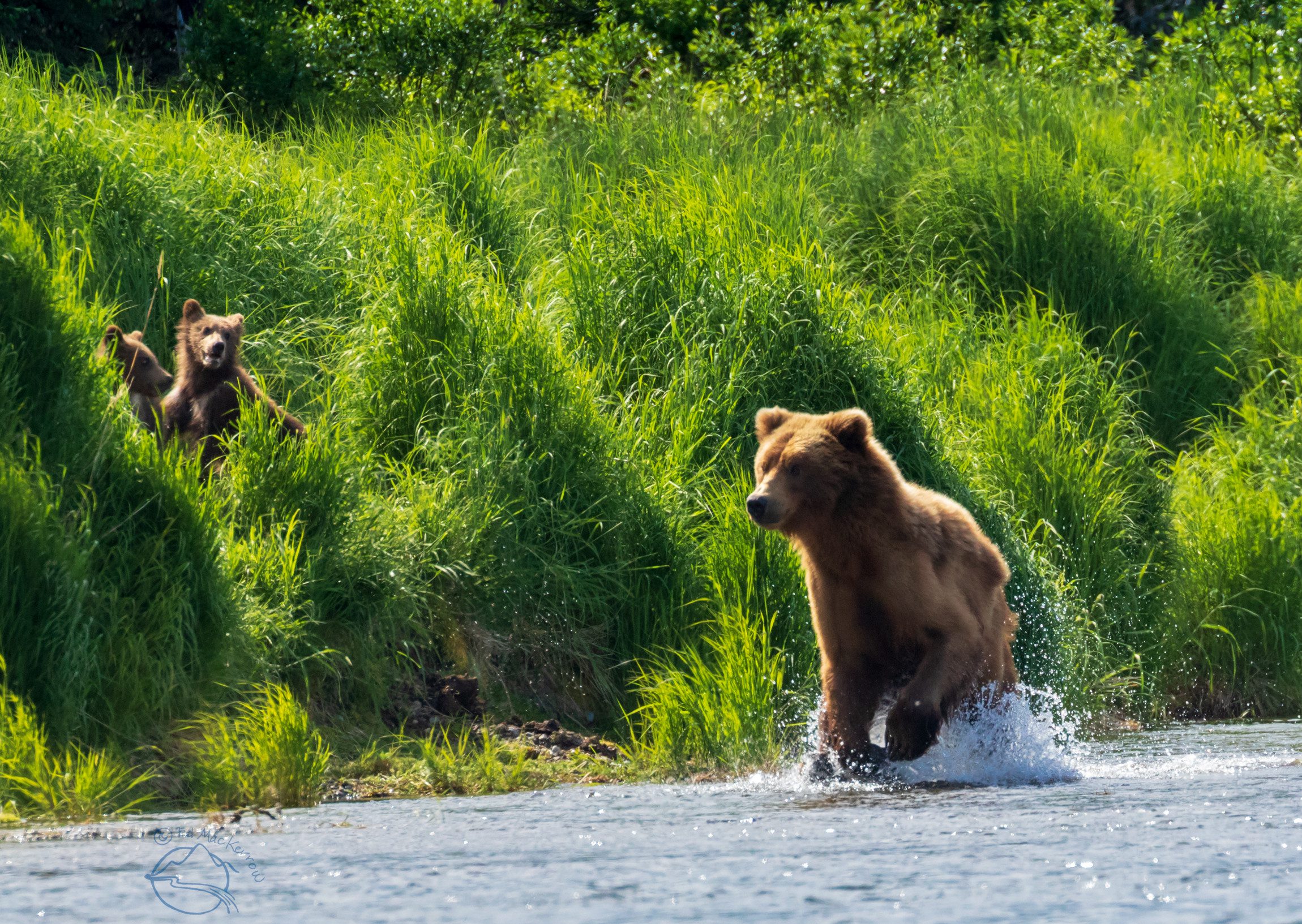 Bear 132 chasing salmon while her two spring cubs follow closely on shore.  When separated from her cubs she was constantly stopping and vocalizing “huffs” to her cubs, who would answer back.  She seemed to be spending equal time looking for salmon and watching her young carefully.  (Photo was taken July 3, 2018).

As I watched Bear 132 in the river with her cubs the family was paying close attention whenever another bear appeared.  Often the cubs would notice the appearance of another bear before the mother would, she was also busy looking for salmon. 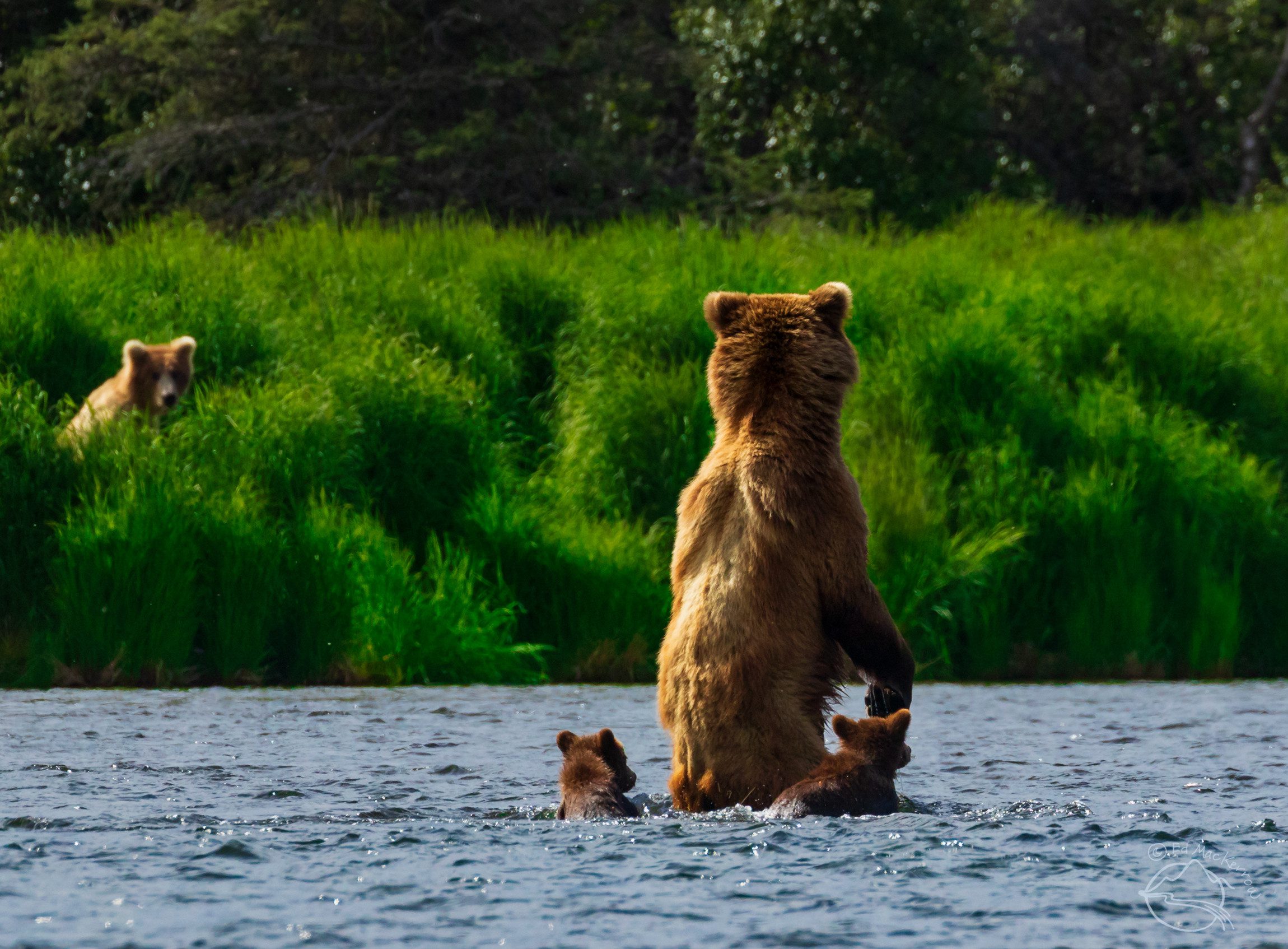 Bear 132 checks out another bear on shore.  The tall grass along the river is effective at hiding these huge bears.  They pop up everywhere when you least expect it!

The “standard operating procedure” with mothers and cubs when encountering another bear is for the cubs to get behind the mother.  Never get between a mother and her cubs! 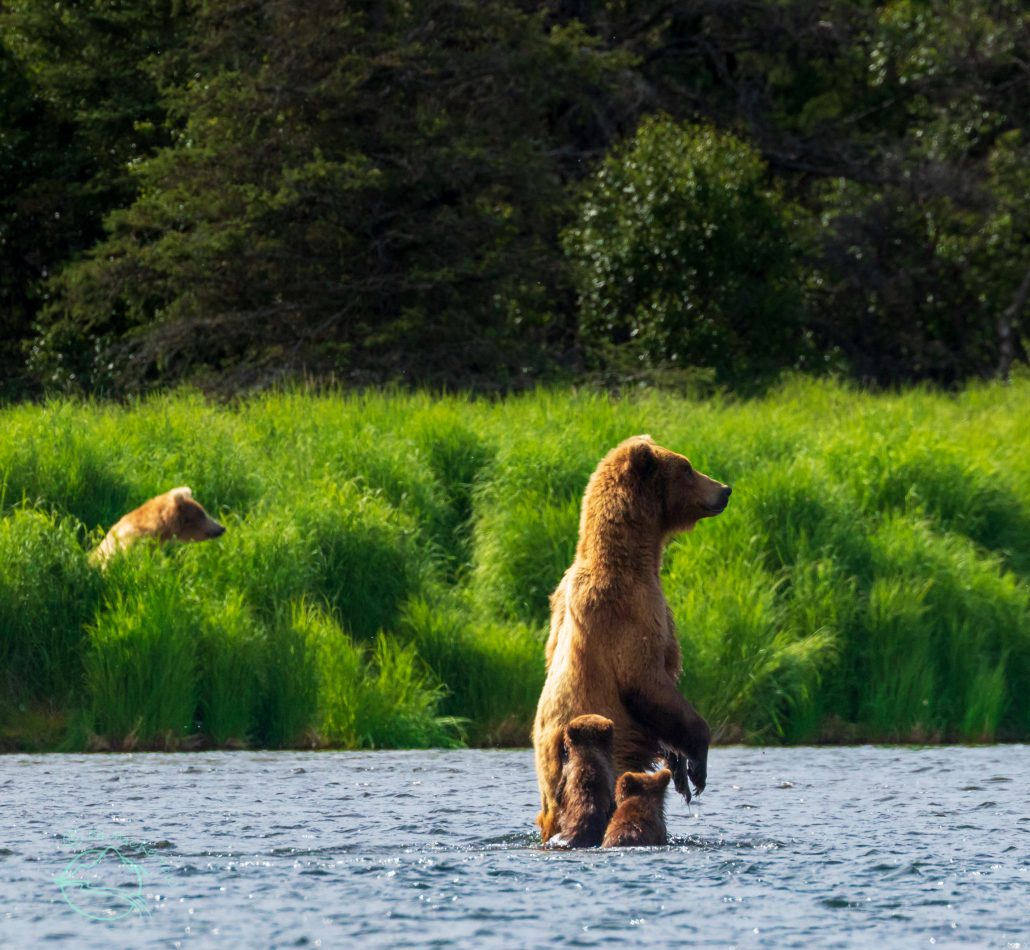 Now that the potential risk of the other bear is realized, the cubs assume the safety position behind mom.

I love photographing mothers with cubs when they are in this type of situation, relatively safe away from males, and even better when the mother catches a salmon.  Bear 132 was having trouble though catching salmon in this part of the river.  The water level was high and although there were schools of salmon, they were dispersed in deep, fast water.

Later that afternoon I went with some friends to Brooks Falls to photograph the large male bears that “own” the falls. My friends and I noticed Bear 132 with her two spring cubs downstream by the Riffles Platform.

We quickly walked to the Riffles Platform.  I remember getting stuck behind some very slow walking park visitors and then another group of people stopped on the walkway who had just watched a large dominant male (Bear 856) chase another male (Bear 634) up into the forest downstream of the Brooks Falls.  I had watched the initial chase between Bear 856 and Bear 634, however, did not think too much of it.  These spats happen a lot between males at the falls.

Our motivation to see the cubs at the Riffles Platform resulted in us passing the slow pokes.  Just as I stepped foot on the Riffles Platform Bear 856 had accidentally stumbled upon one of Bear 132’s cubs about 30 feet from the bank of the river on the upstream side of the platform.  I think Bear 856 was heading back to the falls via this route and the little cub was in the wrong place at the wrong time.

Bear 132 came rushing from under the walkway towards Bear 856 as attacked the tiny cub, now underneath his big head.  I could see her trepidation as she approached, she knew she had to try to save her cub, however, at this point, things were not looking good.

I began photographing the attack.  Unfortunately, it was very close for the lens I had on (a 100 – 400 mm focal length). Even so, I began taking photos, without taking my eye from the viewfinder I dropped the shutter speed way down since I was in the shade.

The photos are blurry and out of focus due to the close proximity, slow shutter, wrong lens, and chaos.  It all happened very fast and I was confused as what to do, whether to photograph this or not.  Feeling helpless, as if I could/should really do anything.  I knew to let nature take its course, although it sure did not feel right just standing there watching!

At one point I do remember Bear 856 getting off the cub and heading away from the river and underneath the walkway.  I am not sure why?  I do remember the cub surprisingly limping over towards the river and thinking it might actually get away and survive, but then for some reason (perhaps to find its mother?) coming back to the scene of the first attack.

At this point, Bear 856 came back and really hit the little cub hard.  The cub was likely fatally wounded from this second attack.  Bear 132 came back at Bear 856 and went for his neck as he tore into the cub underneath him. 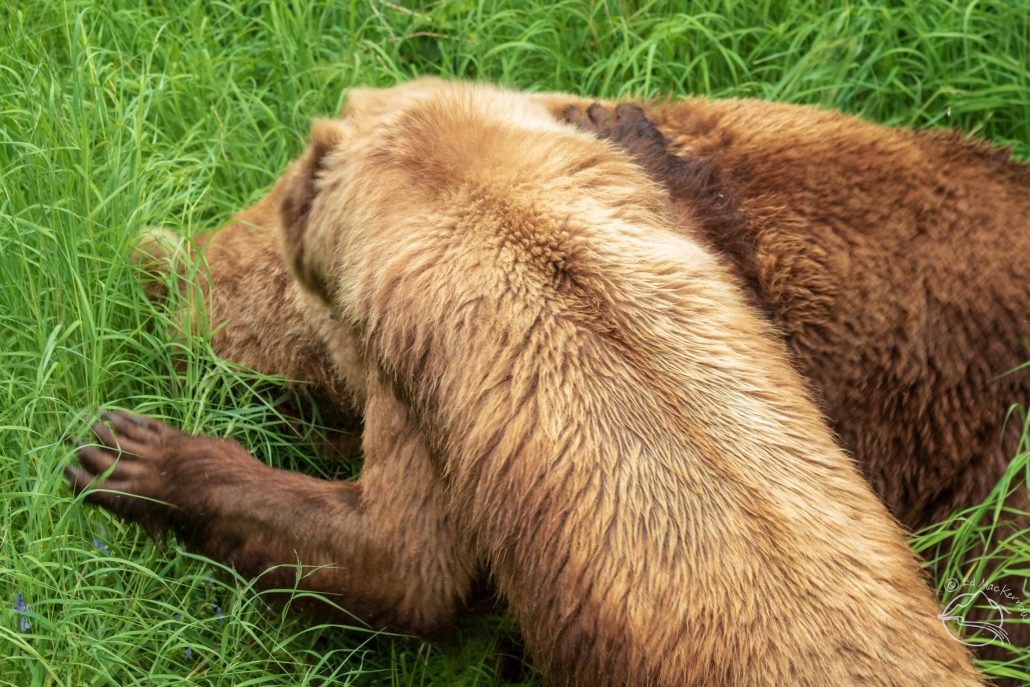 Bear 856 on top of the cub, or with it in his mouth at this point, while the mother Bear 132 tries to get him away from her cub.  The size difference between Bear 856 and Bear 132 is significant!

Watching Bear 132 desperately approach the monster Bear 856 was sobering.  I sensed that she knew she needed to try and save her cub, and yet it would be a serious risk for her to do so.  She bit into the back of Bear 856’s neck.  Quickly he rose up above the cub and looked at her like she would pay the price for doing this. 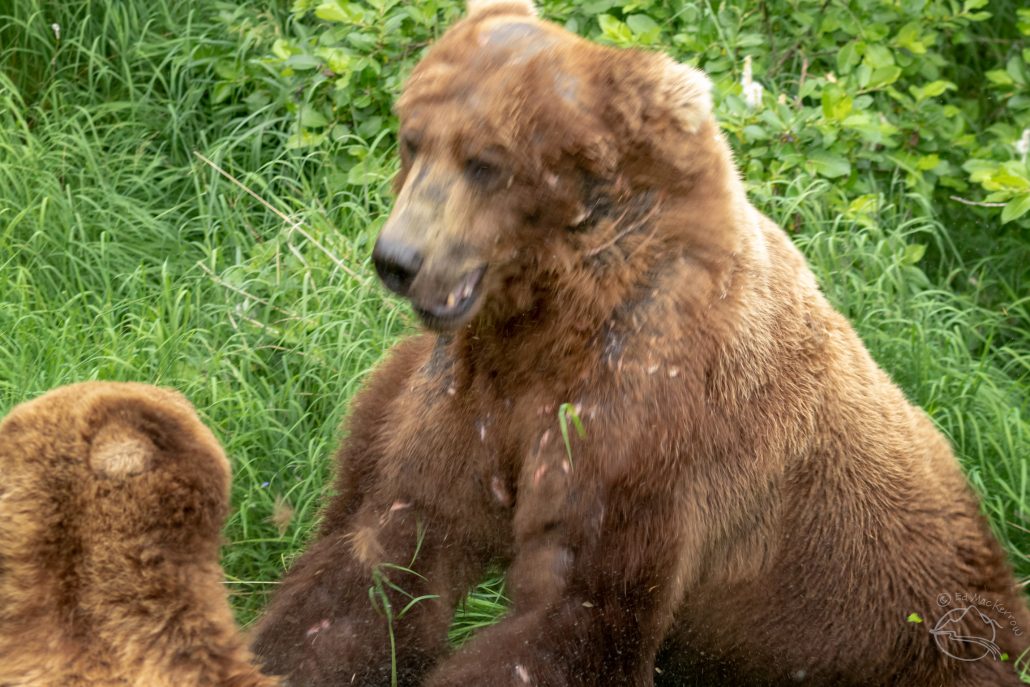 Bear 856 on the right as he comes off the cub and confronts the mother Bear 132.  (low-quality blurry image).

Bear 856 attacked the mother Bear 132 ferociously.  He grabbed her in his arms while she tried to bite his huge neck.  In the photo below you can really see the size difference!  Bear 132 is a big bear herself (see the earlier photos of her in the river).  Bear 856 modus operandi of attack was biting the abdomen of both cub and mother.  He bit Bear 132 while he held her in his arms and then rolled her on her back. 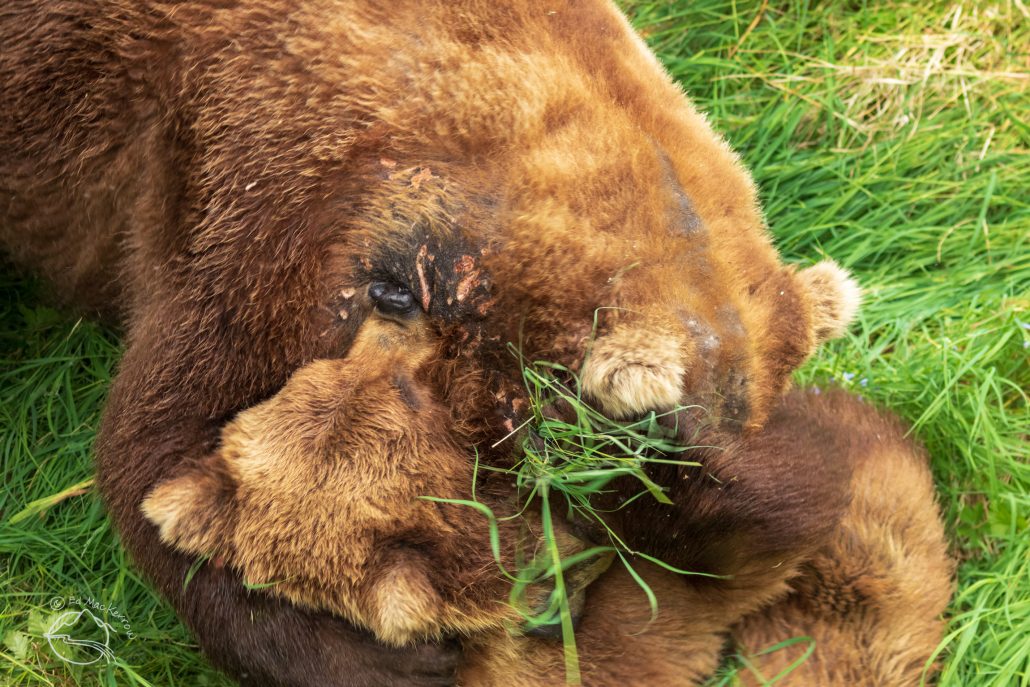 Bear 856 biting at the abdomen of mother Bear 132 while holding her in his arms.

Bear 856 rolled Bear 132 on her back and then literally dragged her directly underneath me on the deck of the Riffles Platform.  I have witnessed many bear fights and this one sounded so bad that I was convinced he killed her.

Bear 132’s other cub had climbed to the top of a tree and cried for its mother.   The mother was nowhere to be seen.  Nobody got a good look of where she went or what shape she was in.  Bear 856 was also gone from the scene.  Sadly the mauled cub lay on its back shaking and vocalizing in its death throes.  This went on for way too long.

It was time for me to leave, I had enough at this point.  Meanwhile two NPS (Volunteer) bear techs rightfully closed the platform.  I knew that Mike Fitz would want to know what had happened, so I hurried to the Falls Platform where he was being videotaped live.  Realizing that I could not interrupt I gestured to Mike and Ranger Andrew that a fatal cub attack had just happened at the Riffles.

My friends and I left the platforms.  We were shaken by this (understatement).  Our discussion focused on hoping the mother Bear 132 was ok and would reunite with the cub in the tree.  It was interesting to me to experience the different emotions and attitudes of other humans.  The few that witnessed the attack were noticeably affected by the event.  Other people were curious to hear about it and not having to witness the gore, almost excited, it seemed on the surface.  I think once they saw the dead cub, and the other cub in the tree bawling for hours, the morbidness of it all sunk in.

The dead cub laid in its place for many days. This was interesting and yet strange to me.  No magpies, ravens, wolves, or other bears paid attention to the carcass.  Perhaps due to the involvement of Bear 856?

Bear 132’s surviving cub, remained up in the tree for a long time (hours).  Later when Bear 435 (“Holly”) came by with her yearling cubs the cub came down out of the tree and hung around with Holly and her cubs until they crossed the river.  At that point, the lone cub was seen crying while heading into the forest.  This is interesting to me since Holly had adopted an abandoned cub in the past.  Could the cub have recognized Holly and realized this, or did Holly communicate to the cub that she would not harm it?  Interesting!

After experiencing the killing of Bear 132’s cub I had enough of bear photography for a while.  I ended up taking another float plane into the backcountry with friends to do some packrafting and fly-fishing.  My hope was that Bear 132 was ok and that she would reunite with her cub.  Upon return from the backcountry trip, I was told that Bear 132 was indeed seen with her cub and she looked fine.  This was great news.  It was hard to believe she was visibly ok based on the attack from Bear 856.

Twelve days after the killing of her cub I was pleased to see Bear 132 and her remaining cub resting in the shade along the river.  She watched for salmon from the shade while her surviving cub stayed close to her. 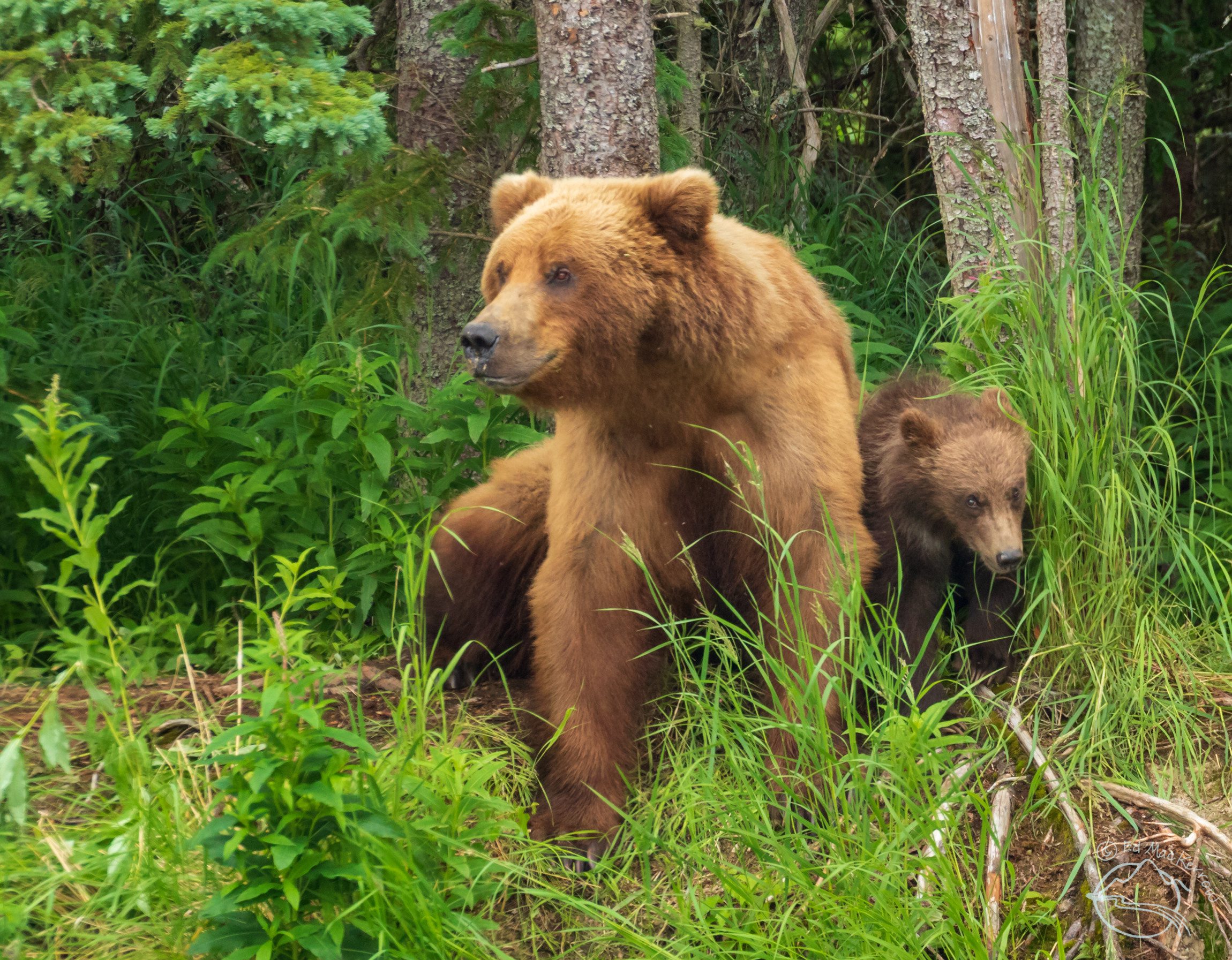 Bear 132 and her surviving cub 12 days after the attack.

After experiencing this horrid event up close I have even more respect for bears as a species.  Now, for me, the value of a bear that reaches adulthood is even greater than it was before I saw the attack.  A mother bear invests a lot in raising her young.  Bears have some of the lowest reproduction rates in mammals, so even a few deaths in a population can have a significant impact on the entire species.

However, we as humans can help the bears survive is well worth it! 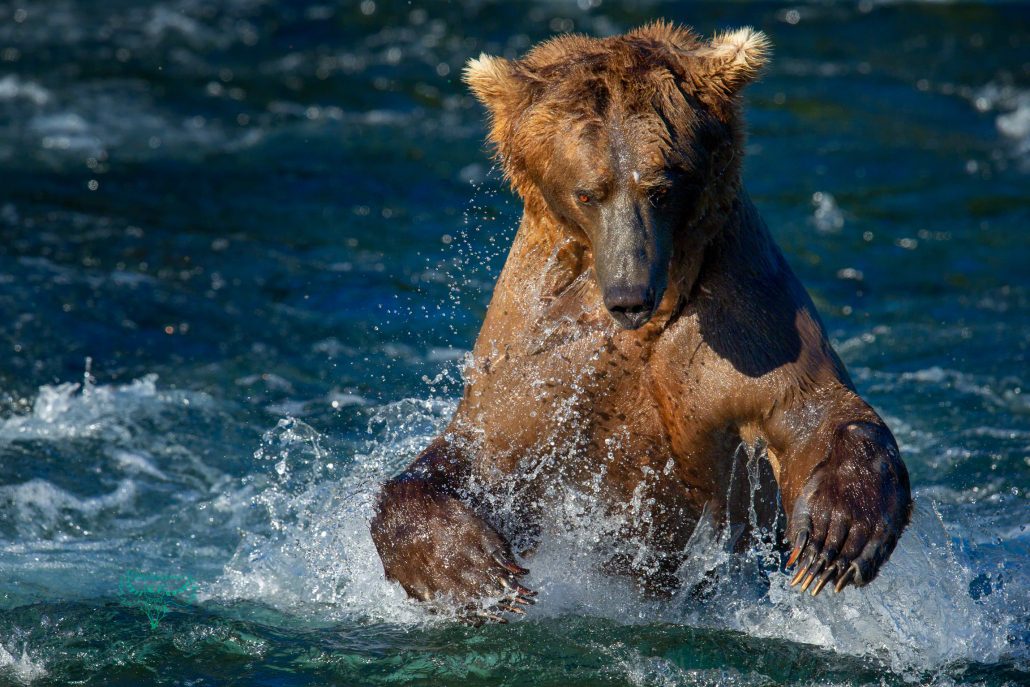 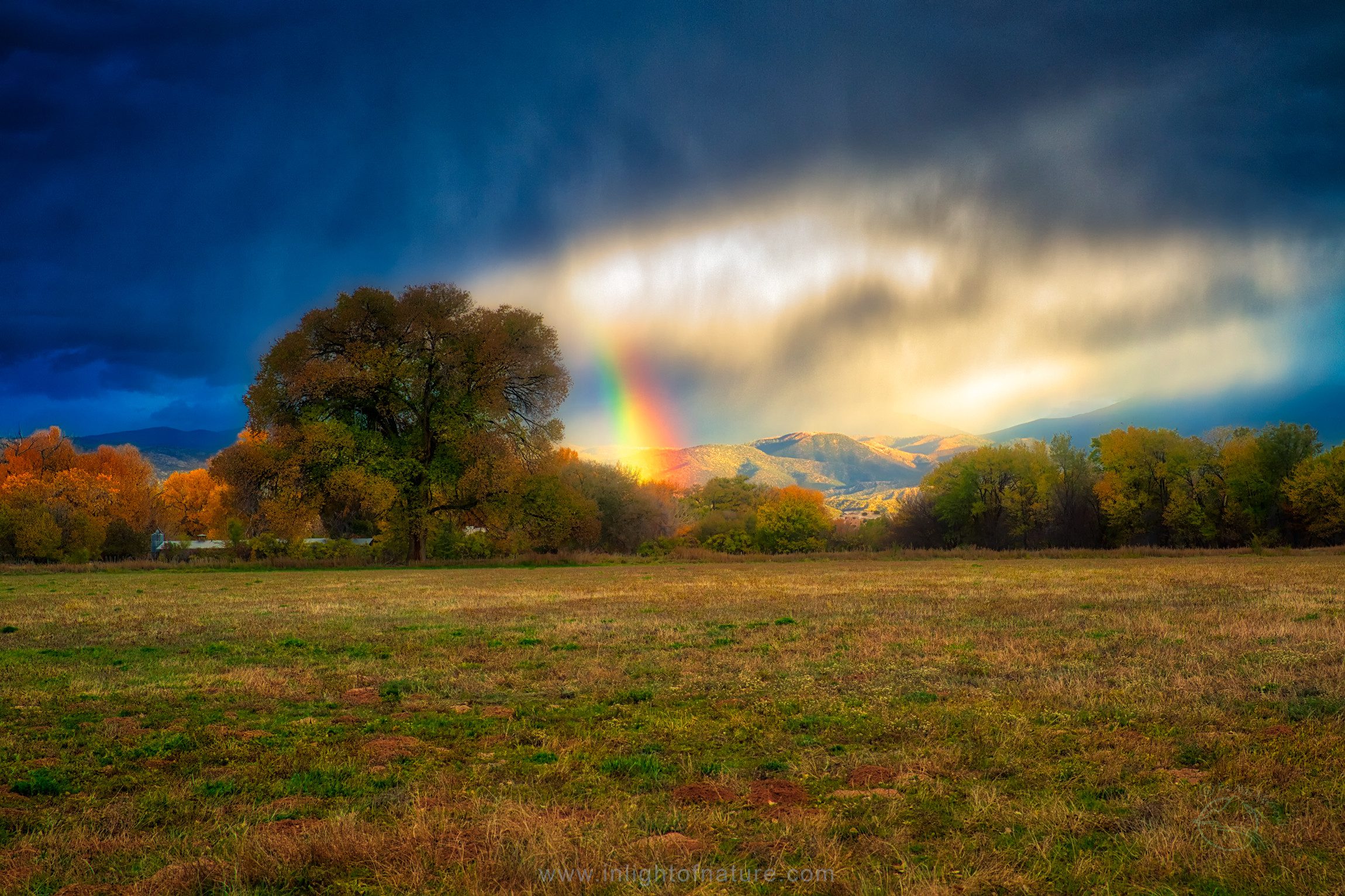